Technical rope work is both a science and an art. It’s a balancing act between situation, simplicity, efficiency,
and proven understanding. Anchoring is an excellent example of this. Every system, if fully understood and applied correctly, is valid, but to use
only one system without considering situational factors is limiting and shortsighted.

If each anchor point within the system is bombproof, it almost doesn’t matter what style of anchor system you use. But in real-world situations, with suboptimal
anchor points, need for more effective stance management, or situations where the anchor needs to accommodate multiple directions of loading, there
are certain anchor types that perform better than others. 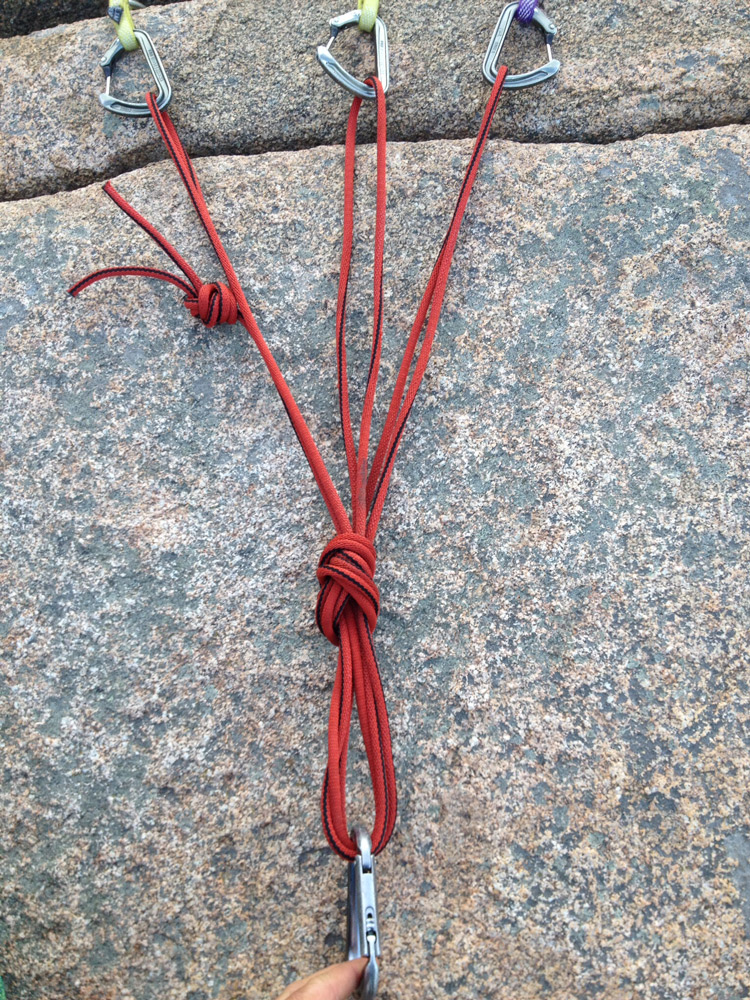 The classic pre-equalized anchor (Fig. 1) is the most commonly used sequential anchor system. It’s clean, quick to tie, redundant, efficiently uses material,
has a well defined masterpoint, and has no extension of the masterpoint if there is an anchor arm failure.

The main problems with the classic pre-equalized anchor system are potential unequal and unpredictable load distribution.

The length of anchor arms and the amount of material in each anchor arm (single strand vs. a loop) affect load distribution due to variable amounts of
material elongation (stretch) in each arm. This can create a situation where the shortest anchor arm of the system receives a significantly greater
portion of the overall load, putting more load onto an individual piece in the anchor system.

As mentioned above, with high quality anchor points this may not be an issue, but with less than ideal placements this could lead to anchor point failure
and potentially catastrophic complete anchor failure. 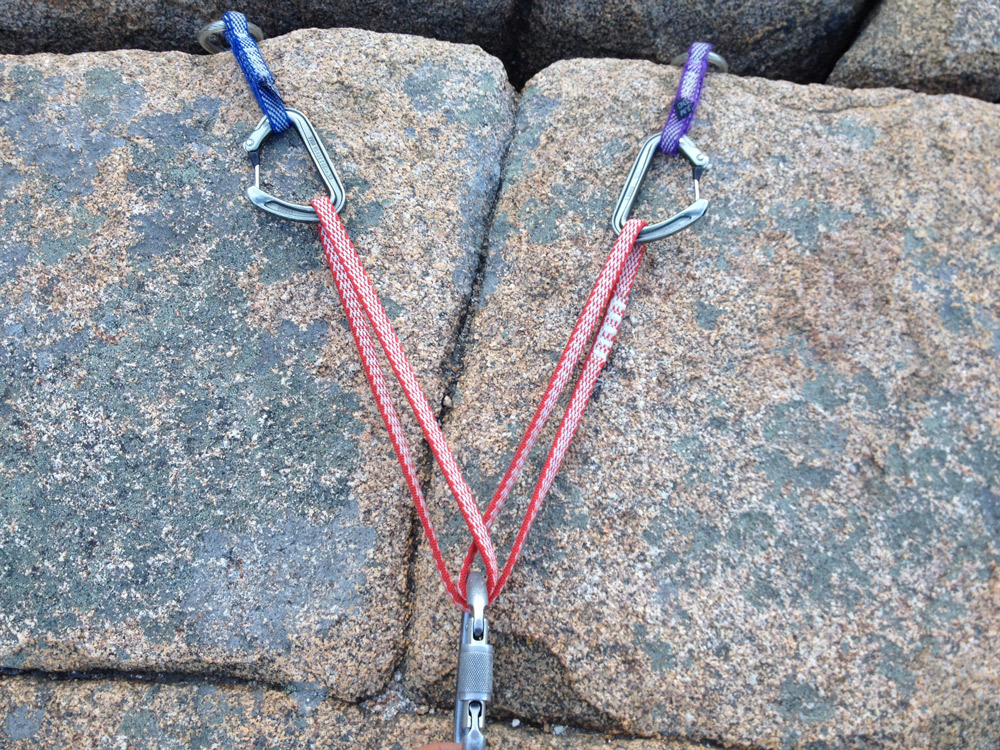 Distributive anchors theoretically distribute the overall load evenly to all anchor points within
the system, reducing the likelihood of a single point failure, and can accommodate multiple directions of pull at the masterpoint.

The self-adjusting nature of the masterpoint allows a wide range of motion which can compensate for directional changes. The “sliding x” (Fig. 2) is the
most common of the traditional distributive anchors.

With this style, however, anchors consisting of more than two anchor points can increase friction and prevent effective load distribution, extension of
the masterpoint if there is anchor arm failure, and redundancy in the material. 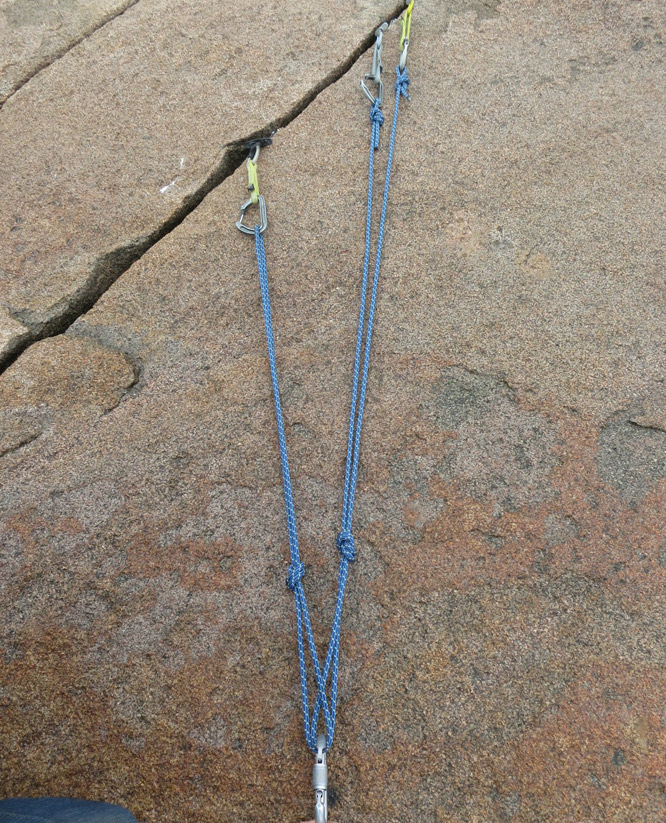 The Equalette (Fig. 3) is a hybrid anchor that blends components of sequential and distributive systems. It addresses many of the problems of both the
classic pre-equalized and distributive anchor systems.

In a three point Equalette there will be one leg in the system that theoretically receives 50-percent of the load. Even while improving upon the issues
associated with pre-equalized and “sliding x” anchor systems, the Equalette still presents challenges to users.

The sequential side (the pre-equalized legs) of the Equalette has the problem of uneven arm lengths affecting load distribution and the system also suffers
from friction at the masterpoint. The masterpoint is less defined compared to the classic pre-equalized anchor, which can be an issue in multi-pitch
stance management when clipping multiple carabiners to the same masterpoint.

The Equalette is a step forward in anchoring construction, but is not the end of the evolution of anchor systems. 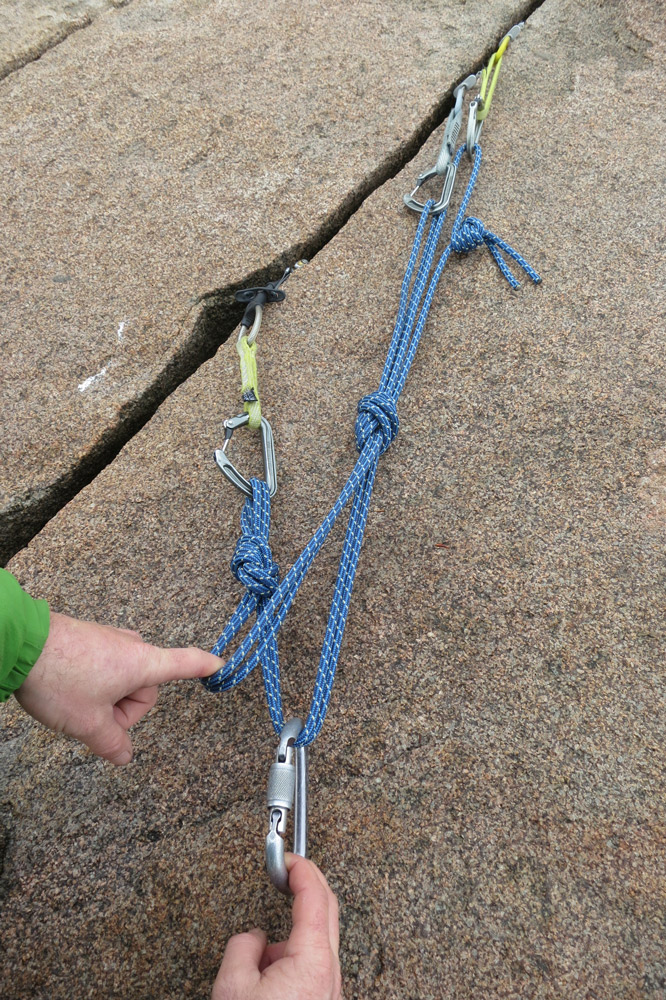 The Quad (Fig. 4) is a newer distributive style of anchor system that addresses redundancy by incorporating multiple isolated strands of material that
guard against system failure due to cutting of individual strands.

The Quad utilizes a “straight V” inside the “quad pocket” which gives it similar load sharing qualities at the masterpoint as the Equalette. With a two-point
anchor, each anchor point receives as close to 50-percent of the overall load as possible, decreasing the likelihood of anchor point failure.

Both the Quad and the Equalette have a certain amount of extension that is inherent with any distributive or hybrid anchor system. Extension can be managed
with the thoughtful placement of limiting knots. The more that extension is limited the more the lateral range of the system is reduced.

When encountering multiple two point anchors, like on multi-pitch rock and ice climbs, the Quad can be pre-tied and used repeatedly for efficient transitions.
The Quad can also be used with three and four point anchor systems with a few variations. When used in this configuration, the Quad becomes the next
step in the evolution of anchor systems beyond the Equalette.

VIDEO: How To Build A Quad Anchor (two-point): 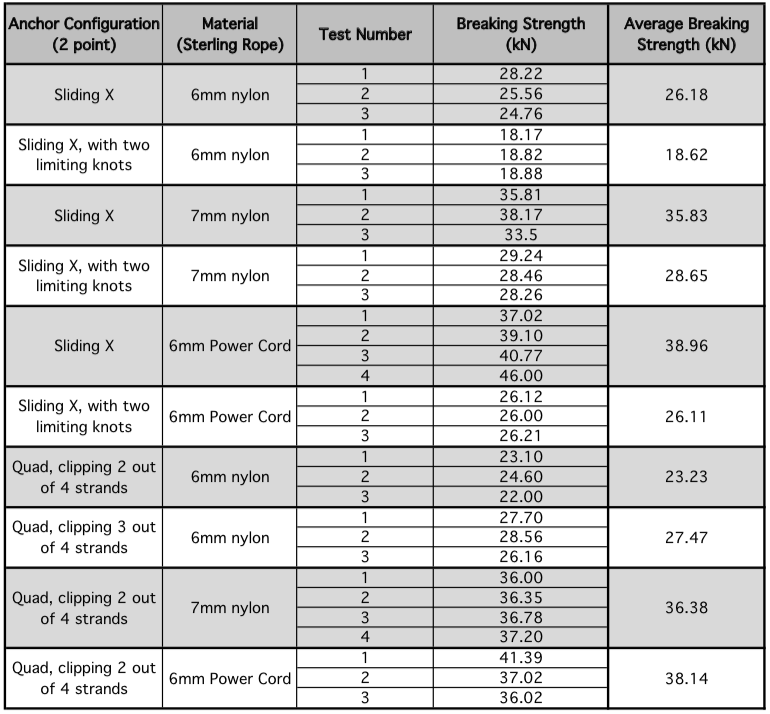 After two days of material and equalization testing, many slow pulls and a number of dynamic tests
on different anchor configurations with Jim Ewing at Sterling Rope, several key points became
apparent:

Seven-millimeter nylon cord proved to be the best overall choice for an anchoring material based on strength, durability, and dynamicity.

The testing proved the Quad Pocket masterpoint to be a stronger arrangement than the Equalette masterpoint (data not in table). The larger knots in the
Quad affected the strength in the cord much less dramatically then the small knots within the Equalette. The gap between overall strength in these
two configurations is more pronounced with the use of high strength material such as Technora or Spectra. 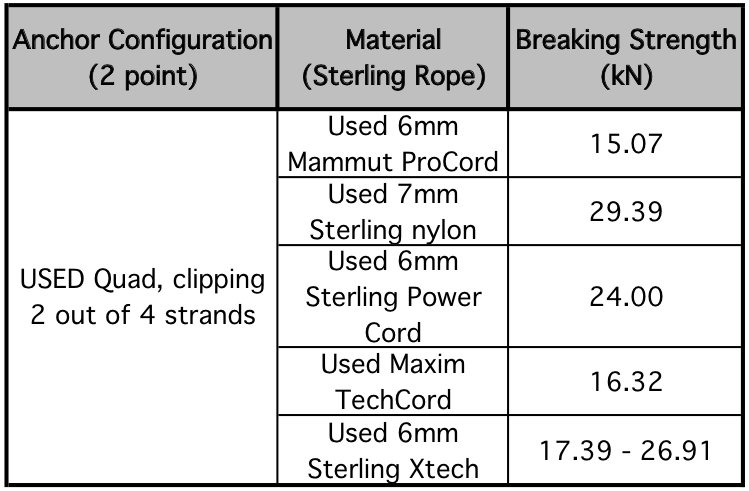 To test equalization, two-point anchors in offset arm lengths and equal arm length configurations were pulled to 5 kN and 10 kN to see the distribution
of load on each point in the system.

In an offset anchor arm scenario the shortest arm consistently received around 3 kN, an uneven load distribution, whether tied with a sliding X or
a Quad. The Quad did equalize slightly better in these tests.

When we added a high efficiency pulley to the two strands in the Quad Pocket to eliminate friction, it resulted in near perfect equalization in both
offset arm lengths and equal arm length configurations. This shows that the inherent friction of the cord and carabiner is enough to inhibit perfect
equalization with the Quad.

This finding has implications for common two point anchor systems that are vertically oriented such as ice screw anchors or gear anchors in vertical
cracks. The data would suggest that the bottom screw or piece should be the largest or better placed of the two anchor points regardless of the
style with which the points are connected.

In summary, the Quad’s capacity to equalize in the real world setting may be more consistent than the sliding X because there is no binding of material,
which often occurs with the sliding X.

These preliminary tests have yielded useful but limited information. Further static and dynamic testing with other materials (Spectra and nylon runners)
could demonstrate if material friction could be lowered and equalization enhanced. 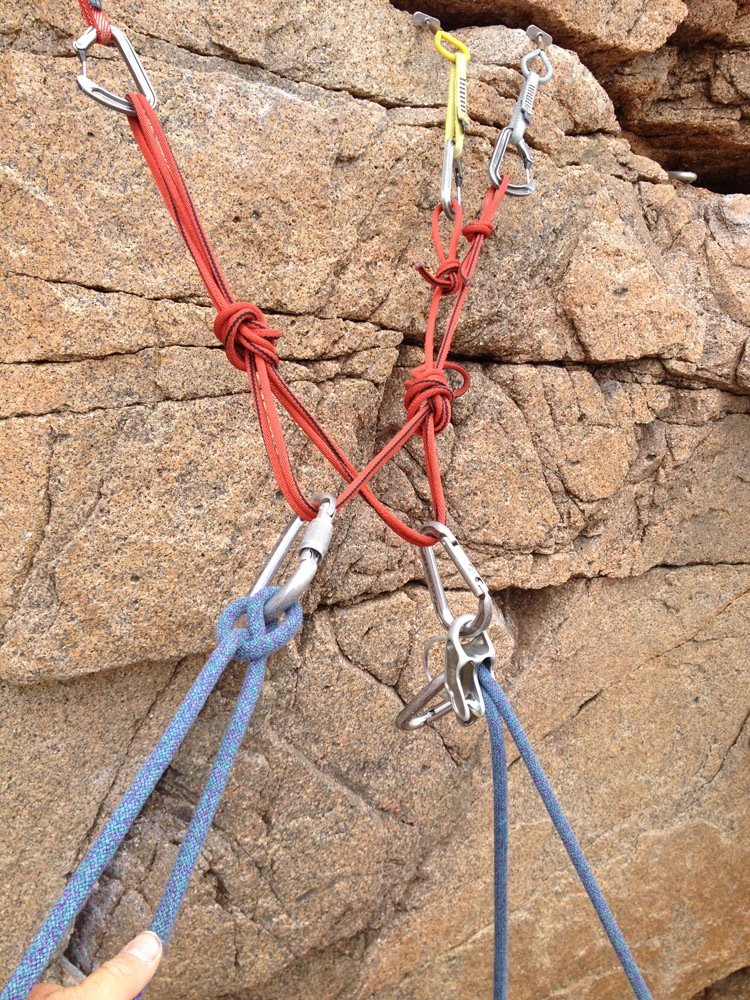 Other Benefits of the Quad

The Quad anchor has two independent masterpoints. This can be a huge advantage in common multi-pitch and single pitch scenarios.

When multiple carabiners share the same masterpoint, and are under load, a “clam shell” effect can happen pinching the carabiners together making manipulation
of those carabiners difficult. Utilizing the two masterpoints of the Quad helps mitigate this problem.

Multi-pitch stance management also often has multiple people attached to the same masterpoint with different directions of pull being applied to the
anchor. Two masterpoints can smoothly adjust laterally, which is helpful when belay stances are in the middle of traversing pitches and the anchor
needs to be able to compensate for the load the second climber may place on the anchor in case they fall while traversing, when the party is weighting
the anchor while belaying, and if the leader falls traversing during the next pitch.

The Quad can compensate for this range of motion.

The Quad and its variations have many benefits over other anchor types for climbing and guiding as well as technical rescue and industrial rope-work.

But there is no perfect anchor system. Every situation has factors that one must consider, and the more options you have in your toolbox, the better
you’ll be able to tailor to each situation for the best outcome.

Thank you to Jim Ewing and Sterling Rope for providing time, knowledge, materials, and the testing facility.

Click here to read his full paper: Revisiting the Quad for Load Distribution and Stance Management.