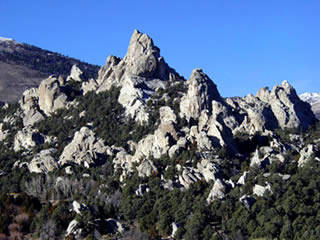 The Bureau of Land Management (BLM) announced on April 17 that all climbing activity will be banned on their 400-acre portion of Idaho’s Castle Rocks. The BLM cites the protection of cultural resources as their reasoning for the ban. However, the Access Fund—with the help of Idaho’s local climbing advocates, Forest Service, BLM, and Idaho Parks and Recreation—had already created a climbing management plan for the area in 2003 and says that the BLM is now ignoring the very protection plan it helped establish.

The Castle Rocks Recreation Area is adjacent to the popular City of Rocks, in the southern Albion Mountain Range of Cassia County, Idaho. The area includes 480-acres of the Sawtooth National Forest, 400-acres of land managed by the BLM’s Burley Field Office and 1,420 acres of Idaho Department of Parks and Recreation’s Castle Rocks State Park.

If you are interested in voicing your opinion against the closure, the Access Fund has provided a letter writing tool at the bottom of their press release, which will automatically send your e-mail to the congressional delegation and governor’s office. Click HERE to visit the Access Fund’s press release.