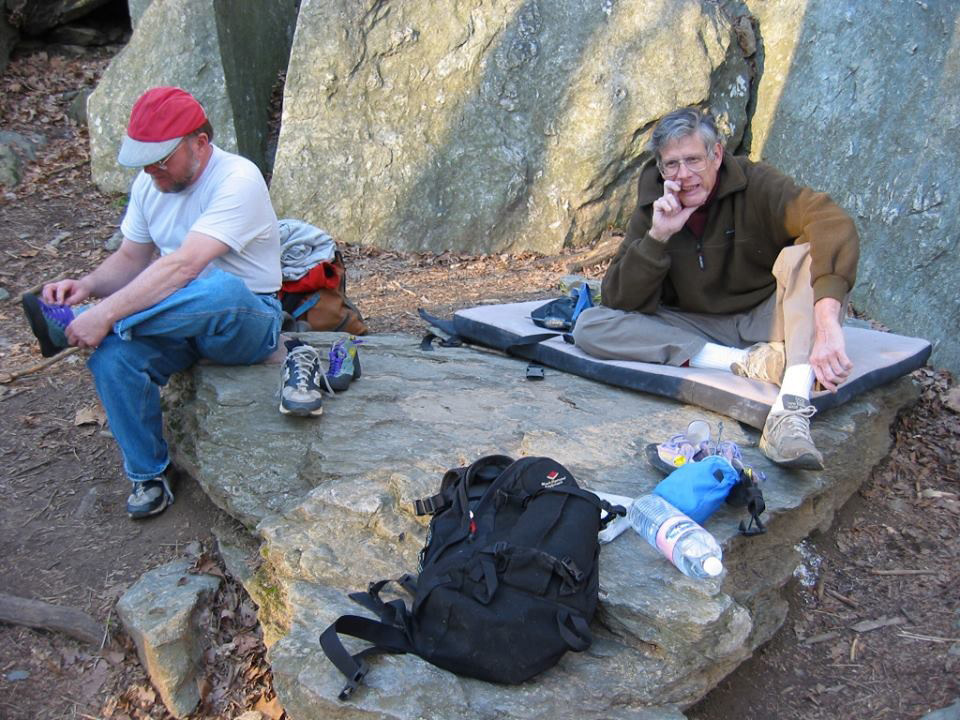 Geoffrey Farrar, a talented and imaginative rock climber, died in Bethesda, Maryland, on December 28, from head wounds received earlier that day at Carderock, Maryland. He was 69.

Although his injuries were first reported as occurring in a bouldering accident (Farrar usually climbed without a rope), the head wounds and evidence at the scene were inconsistent with a fall.

On Monday, January 13, police charged another Carderock climber, David Di Paolo, 31, with murder based on forensic evidence and Di Paolo’s oral and written statements. However, many questions remain unanswered.

What is known is that an argument took place between Farrar, known to local climbers as “Carderock Geoff,” and Di Paolo around noon on the 28th in the parking lot above the well-known cliffs along the Potomac River. Dave Di Paolo had been climbing for two decades and for many of those years was the protégé, perhaps even a surrogate son, of Farrar, who came to the climbing scene in the Washington, D.C., area in the early 1970s.

During the mid-1990s, bouldering became the medium of choice for a new, multi-generational wave of climbers at Carderock, a crag known primarily for toproping. “Young Dave,” as Di Paolo was called, to distinguish him from several other, older area climbers named Dave, was prominent in this small universe, and Farrar was its imaginative center. As sidekick to Farrar, whose hard, esoteric problems, often dependent on arcane one-handed or no-handed high steps, or subtle step-throughs, Di Paolo was often the first ascentionist or a close second to Farrar, who would then describe the inobvious moves with a long stick for which he was locally famous.

Farrar was inventive and prolific. His routes became a myriad of layers, with long-forgotten problems forming the substrata, and other holds, however microscopic, creating new problems, like ancient drawings lain over one another on the walls of Paleolithic caves. He never named his problems, nor did he rate them.

Paul Hess, another local climber central to the bouldering renaissance, also found a mentor in Farrar. His testpiece boulder problem Wave Tossed Man on the X-Face of Carderock is an homage to Farrar, with whom he collaborated in working out the moves. Hess dedicated his PhD dissertation to “the wayward souls of the Carderock climbing community” and thanked Farrar “for his frequent and less-than-subtle reminders that I really should be working instead of climbing on the cliffs of Carderock.”

On December 28th, shortly after the altercation between Farrar and Di Paolo, which no one is known to have witnessed, the “Mayor of Carderock,” John Gregory, arrived to climb for the day. He found Farrar distraught and talked to him as they walked down to the cliffs on a beautiful winter day. Di Paolo was not in sight. Farrar described the scene to Gregory.

The two separated to different areas of the cliff, Gregory to set up a roped climb and Farrar to his usual haunt at the base of the X-Face, where his crash pad and pack were found. Gregory returned from setting up the climb Butterfly at the downriver end of the crag to find Farrar lying near death at the base of Cripples Crack. Gregory saw Di Paolo run from the scene.

Only two things are certain: that Carderock Geoff is dead and that Di Paolo has written in a statement to the police: “I didn’t want this to happen.”

A deep love sustains those of us who grew up climbing at Carderock, as Craig Miller has reported on a Facebook thread, and in spite of any personality issues, we always had the rock, the infinite rock, and our ability to climb. Geoff was master in a narrow field and those who currently boulder here owe much to his vision. Few contemporary climbers, on infrequent visits to Carderock, have come close to solving his problems.

Many of those problems remained elusive to me; fortunately, others I could solve, often with help from the long stick, but much to his loudly announced disappointment. (If Geoff sensed one was being annoyed by his constant chatter, he increased it.) The only problem I ever put up that he couldn’t do, a sick step-through in challenge and response to the Paul Hess route Ash Wednesday, I called Ashes for Geoff.

A memorial is expected at Carderock in the spring.