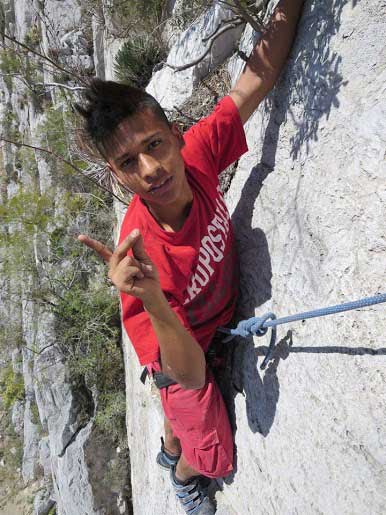 In Mexico, over 30,000 kids have been used as child soldiers for cartels, and many more are at risk of becoming involved in gangs, drugs and human trafficking. Yet despite these difficult obstacles, one organization is attempting to turn at-risk youth into climbers, leaders and agents of positive change instead of soldiers.

Escalando Fronteras – Climbing Borders, an organization started by Nadia Vazquéz (Mexico), Rory Smith (U.S.), and Nicklas Karlsson (Sweden) along with climbers Gareth Leah and Tiffany Hensley, is using climbing as a developmental tool at-risk youth in Mexico, and are already seeing results. Founded in 2013, the organization first targeted 50 kids from Lomas Modelos – one of Monterrey’s most marginalized neighborhoods. After witnessing the positive impact on the youth from Lomas Medolos, Escalando Fronteras now aims to create a youth climbing center, where at-risk youth in the Monterrey area can access climbing instruction, mentors, tutors, and job training.

Escalando Fronteras has now launched their campaign, which is open for donations. Visit their website HERE.

Check out this video documenting the efforts of Escalando Fronteras.