In front of a packed crowd this weekend in Vail, Colorado Shauna Coxsey of Great Britain and Jongwon Chon of
South Korea topped the podium at the one-and-only IFSC Bouldering World Cup held on U.S. soil. For Coxsey, it was her third gold medal out of the five
competitions so far this season, and 10th of her career. 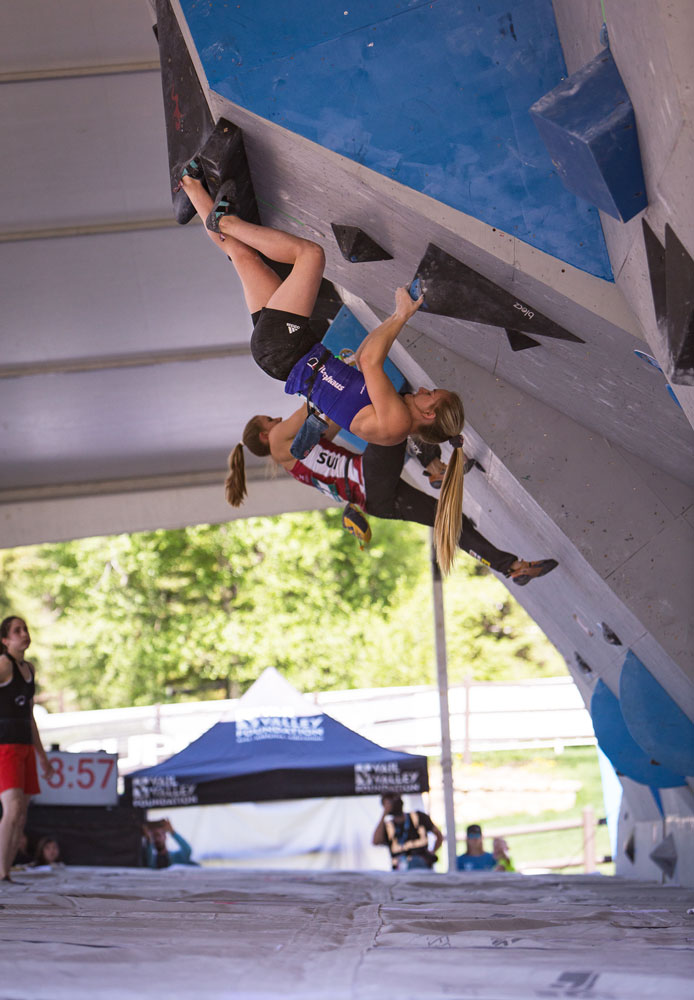 Tim Foote Petra Klingler of Switzerland (left) and Shauna Coxsey of Great Britain battle it out in qualifiers at the IFSC Bouldering World Cup in Vail, Colorado this weekend. Photo:
Tim FooteThe world cup kicked off Friday during the GoPro Mountain Games
with 59 men and 55 women in the qualifying round. The top 20 men and top 20 women moved on to semifinals held Saturday morning, and then the top six from each moved on to finals later that afternoon.

In finals, Coxsey secured first place with three tops in only four attempts, ahead of Akiyo Noguchi and Miho Nonaka, both of Japan, who topped three problems
in six attempts and seven attempts, respectively. Coxsey also won the bouldering world cups in Nanjing, China and Meiringen, Switzerland earlier this season.

The U.S.’s own Alex Puccio took fourth place with three tops in 10 attempts. Katja Kadic of Slovenia came in fifth with one top in three attempts and Petra
Klingler of Switzerland rounded out finals in sixth with zero tops and one bonus hold in two attempts.

On the men’s side, Chon dominated the field by topping all four finals problems—the only competitor to do so—in nine attempts. Meichi Narasaki
of Japan took second with three tops in six attempts and Yoshiyuki Ogata of Japan rounded out the podium in third with three tops in 11 attempts. Russia’s
Alexey Rubtsov took fourth with two tops in five attempts, and the Japanses climbers Kokoro Fujii and Keita Watabe completed finals with two tops in
six attempts and one top in three attempts, respectively.

Team U.S.A. had a strong showing at the competition, and along with Puccio, Brooke Raboutou—for her first adult bouldering world cup—Megan
Mascarenas, Meagan Martin and Lily Canavan all made it into the final round. Raboutou placed ninth overall, Mascarenas placed 15th, and Martin and
Canavan came in a three-way tie with Leah Crane of Great Britain for 18th.

In Rock and Ice’s hangboard competition between semifinals and finals, Kestrel Pikiewict, of Louisville, Colorado topped the
leader board for hang time on the two-finger pocket with a time of 1 minute 46 seconds She also won last year. For the quarter-inch edge, Jake Kibbee,
from Parker, Colorado, took first with a hang time of 51.73 seconds. Pikiewict and Kibbee each earned a free year-long subscription to Rock and Ice.

With five of seven IFSC Bouldering World Cups in the books, Coxsey, who has claimed three victories so far, leads the overall bouldering world cup rankings with 435 points, ahead of Janja Garnbrete of Slovenia with 370 points and Nonaka with 297
points. For men, Watabe holds a slight lead in the overall rankings with 332 points, ahead of Chon with 326 points and Rubtsov with 307 points.

The next and penultimate IFSC Bouldering World Cup will take place in Navi Mumbai, India on June 24 and 25.
Check back for live streaming of the events. 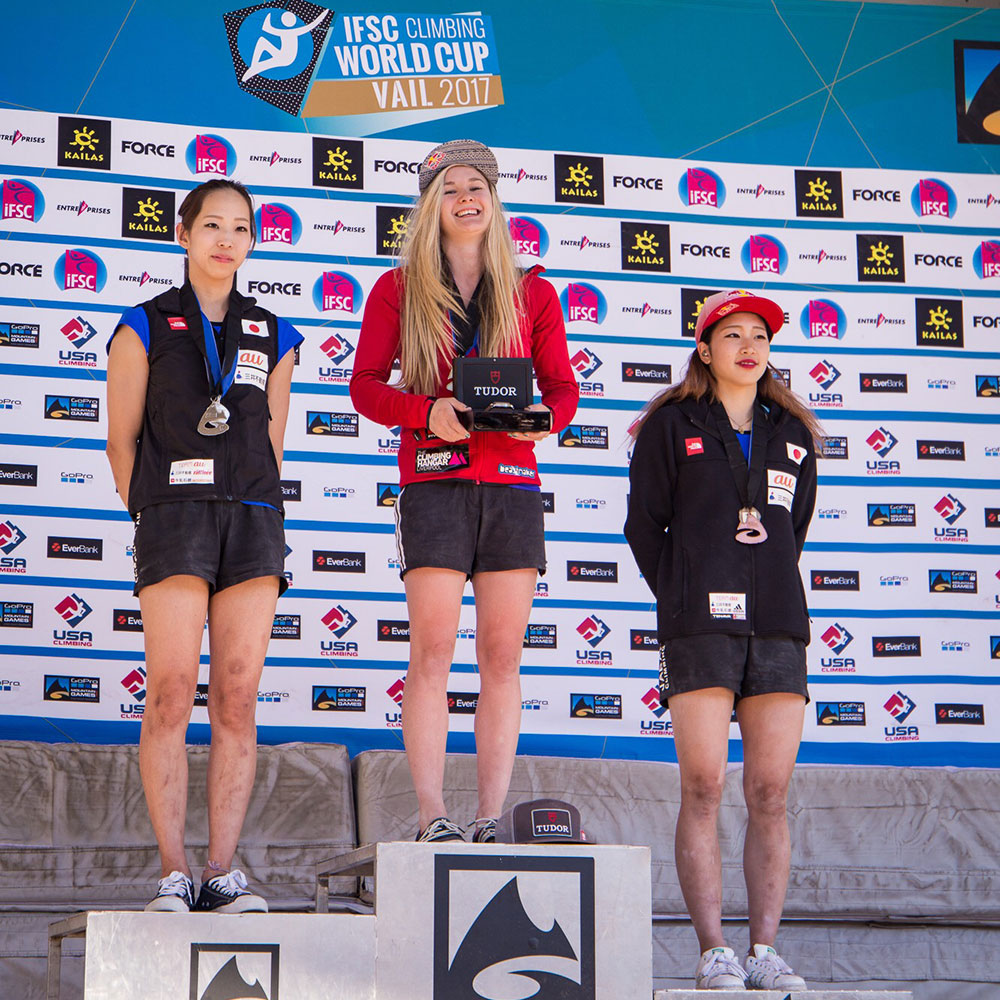 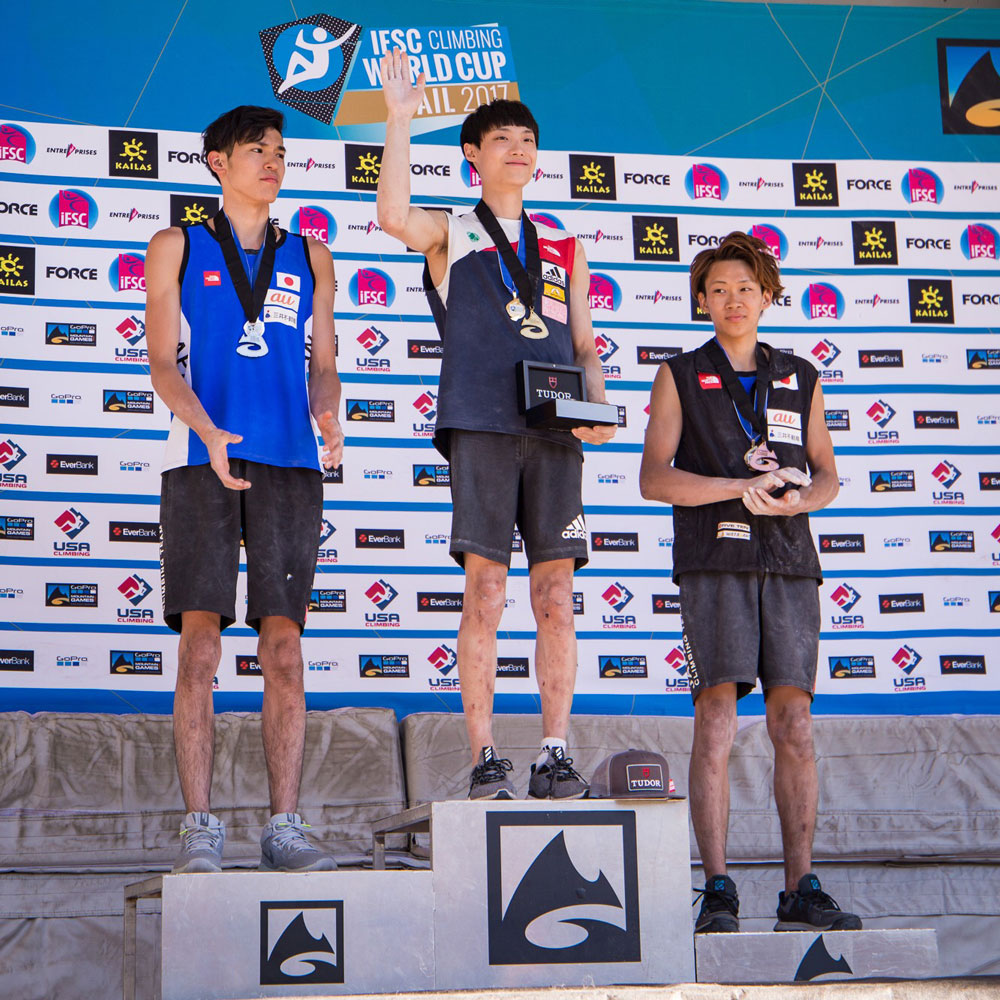 Watch the highlights from finals: