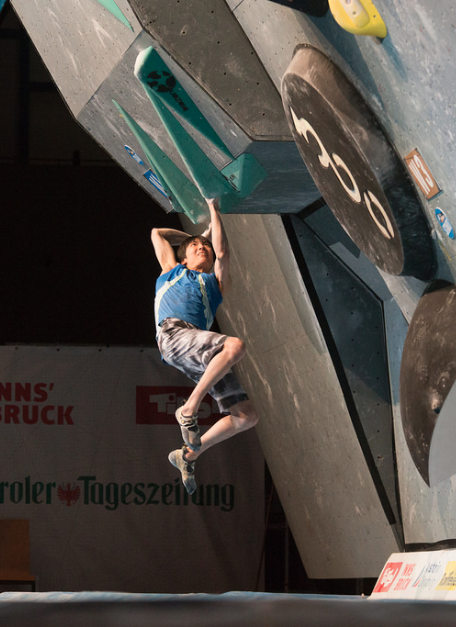 Great Britain’s Shauna Coxsey is back on top with her fourth IFSC Bouldering World Cup victory of the year.
Coxsey and Jonwong Chon, of Korea, took gold in Innsbruck, Austria.

Coxsey, who uncharacteristically missed finals at the last bouldering world cup in Navi Mumbai, almost missed the cut again, but she flashed the final semi-finals problem to tie home-crowd
favorite Anna Stöhr. Both women snuck into finals in the last available spot.

Coxsey went on to top out all four finals problems in a total of eight tries, which landed her in first place ahead of Slovenia’s Janja Garnbret, who took
10 attempts to climb all four problems. The previous bouldering world cup’s champion Miho Nonaka, of Japan, rounded out the women’s podium after she climbed all four problems in 13 tries.

America’s own Megan Mascarenas took fourth place after flashing both the friction sphere-holds women’s problem number one and the technical women’s problem
number two. Stöhr came in fifth place with two tops in 11 tries, Akiyo Noguchi sixth with one finish and Sol Sa seventh, to complete the women’s Finals
field.

On the men’s side, Chon was the only competitor able to complete men’s problem number one. He powered his way through problem number two
and flashed problem three for the win, three tops in four tries.

Tomoa Narasaki of Japan finished two of four finals problems in nine tries for second place. He also placed second at the in Navi Mumbai.

Canada’s Sean McColl held it together on problem number two, his only top in finals, to take third place, just ahead of Rolands Rugens of Latvia who also
completed one problem in three tries, but who took eight attempts to reach two bonus holds when McColl only needed four.

Dmitrii Sharafutdinov, of Russia, placed fifth and Martin Stranik of the Czech Republic took sixth to round out men’s finals. 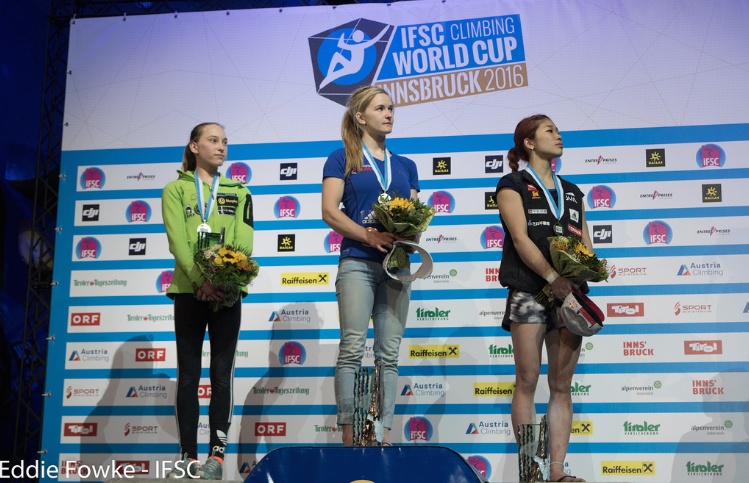 With only two bouldering world cup left in the season, Coxsey holds a strong lead in the overall rankings with 437 points, ahead of Nonaka in second with 319 points and Melissa Le Nevé in third with 298. Mascarenas,
the top overall female for the U.S. currently sits in 14th.

Narasaki holds a slight lead in the overall rankings for men with
298 points, ahead of his countryman Kokoro Fujii with 289 points and Russian Alexey Rubtsov with 262.

The second to last IFSC Bouldering World Cup event of the year will take place on in Vail, Colorado June 10 and 11, during the GoPro Mountain Games—the
only climbing World Cup held on U.S. soil. Check back for live streaming and results.

Rock and Ice will be there! Stop by our booth by the climbing wall to say hello and grab some free magazines.

Watch the highlights from Innsbruck: