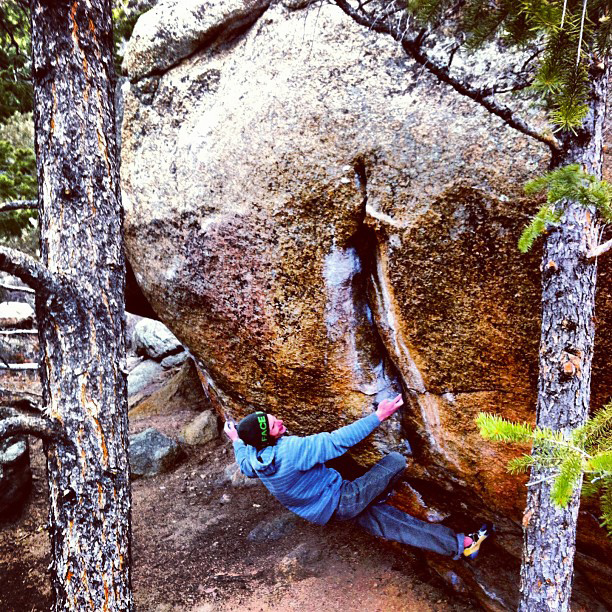 Cameron Maier ” />Daniel Woods has made a very quick repeat of Dave Graham’s recent V15, Bridge of Ashes. In fact, Woods managed to send the problem in just one session.

“I was lucky enough to have freak conditions,” wrote Woods on 8a.nu. “There was a very cold, dry wind blowing….snow flurries… and just the right amount of moisture to stick perfectly to the grips.”

Of course some speculation of the problem’s grade has now begun due to Woods’ extremely fast success. For example, Jamie Emerson of B3bouldering wrote, “To make matters even more interesting Daniel Woods made the second ascent yesterday in a day. No word yet on his assessment of the line (either it’s quality or difficulty), but his recent failure on Lucid Dreaming (albeit a ridiculously short trip) suggests it maybe easier.”
The post refers to Woods’ latest excursion to Bishop where he aimed to repeat Paul Robinson’s Lucid Dreaming (V15/ though originally graded V16). Woods was unable to repeat the problem, though he was only able to spend three days trying the line. The fact that Woods was able to repeat Graham’s problem so quickly in comparison to his recent attempts at Lucid Dreaming has led to the speculation that Bridge of Ashes might not stand at V15. However, it is also worth noting that Woods has climbed V15 on his first try in 2011, flashing the famous Fred Nicole problem Entlinge in Murgtal, Switzerland. But after his flash ascent,Woods mentioned that Entlinge fit him perfectly, and suggested a personal grade of V14.
Woods had this to say about Bridge of Ashes on 8a.nu: “Though it went in a session, this boulder is hard. It is powerful, finicky, and requires precision. The rock will eat your tips very quickly. A true CO test piece, and for me the 2nd hardest problem in the state.”