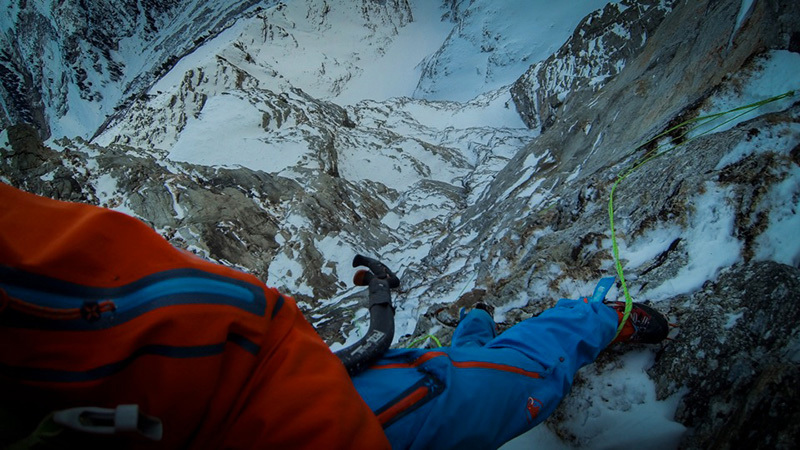 Austrian climbing polymath David Lama has soloed a new winter route in the Zillertal Alps. Despite the fact that Lama told Planet Mountain the route is “actually nothing particularly special,” the climb was an impressive outing for any alpinist. Lama’s new route, which he named Nordverschneidung, is a spicy concoction of WI 4 ice, M4/5 mixed terrain and 5.10 loose alpine rock that travels about 1,300 feet up the North Face of Hohe Kirche in the Valsertal region of the Zillertal Alps, Austria.

Even more impressive is that Lama soloed the line, mostly without a rope. Navigating through 90 degree ice and “easy” mixed climbing, it was only after roughly 650 feet that Lama busted out the rope. The crux, according to Lama’s Planet Mountain report, was four “demanding” pitches of rock.

“The rock wasn’t great, it was hard to protect and climbing with crampons on the bare rock made things dicy,” Lama told Planet Mountain.

After the crux, Lama soloed the final 300 feet to the summit, had some tea, and then descended to his skis via the mountain’s West Face. Lama finally reached his car after a brisk six and a half hours of alpine climbing in temperatures as low as 14 degrees.

“As I said, it’s nothing really special,” Lama told Planet Mountain. “But it’s something I always wanted to do and it’s certainly the easiest, most logical line up through the North Face.”