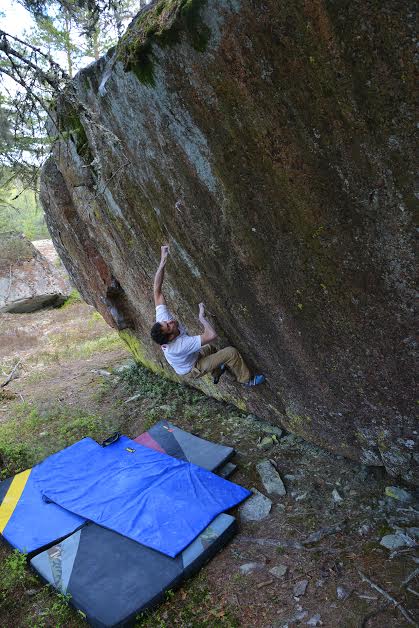 Armed with towels and toilet paper to dry possible routes, British boulderer David Mason managed to climb 20 boulder problems between V11 and V13 during a 17-day stint in Vastervik, Sweden.

Mason traveled to the woodland of Vastervik mainly to project The Hourglass (V13), which he attempted last September while attending the Vastervik International Boulder Meet.

With a tough first day, marked by exhaustion and high temperatures, Mason failed to do three of the seven moves on The Hourglass.

“Had I been kidding myself that I could do this thing?” wrote Mason in an e-mail to Rock and Ice. “It got to about 6 o’clock on my rest day, and I thought ‘To hell with this,’ and off I went to reacquaint myself with the movement on the boulder.”

After his second session, Mason was much closer to sending Hourglass, despite having to tape two split fingertips.

His third session, just two days after his second, was a cool, overcast day. His window of opportunity had opened. His first attempt from the bottom felt good, according to Mason, but as he reached the fourth move, he overshot a deadpoint to a small right-hand crimp and fell off.

“I didn’t feel tired, I had just been unlucky, and so I ripped the tape off my tips, chalked my hands and got straight back on,” wrote Mason. “I would love to say it felt easy and all went smoothly, but that would be a lie.”

Mason explained that he “tried hard, dug deep and made the odd grunt in the taming of The Hourglass. “But rolling onto the boulder at the top felt great,” he wrote. “Elation, relief and complete and utter happiness coursed through me.”

Mason spent his extra time exploring the beauty and variety of problems that the granite of Vastervik has to offer with Stefan Rasmussen.

“I would love to say a big thank you to Stefan and Sanna Rasmussen for putting me up, putting up with me and showing me around,” Mason wrote.

Highlights from his trip include the second ascent of Hulken and Freedom of Speech, both V12, and sends of Rhythm (V13), Fysiologi (V11), Soul Fly (V12) and Namaste (V12).

The ability to climb the majority of what he tried in a short amount of time allowed Mason to keep his skin in reasonable condition, which, he said, is often a “massive hindrance.”

This and his growing confidence is what made this climbing trip so successful, according to Mason.

“Success breeds success, and so, motivation was easy in this instance, it’s when things aren’t going well that it is hard to turn it around,” wrote Mason. “I normally choke when pressure is applied. I know I am capable, but so often I fall short, but this time something was different.”

Watch David Mason sending some of the routes in Vastervik, including The Hourglass (V13).
Västervik Bouldering 2014: The Hourglass