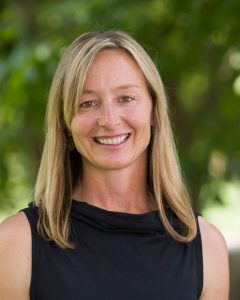 When Deanne Buck talks about the 25-foot wood-panel YMCA wall where she first started climbing, she is not just talking about a 25-foot wood-panel YMCA wall. She is talking about a pivotal moment in her life, one that steered her into decades of work in advocacy, access and equity. Since her mid-twenties, Buck has worked as a corporate attorney for numerous climbing companies, as the Program Director for the Access Fund, and as the executive director of Camber Outdoors. Now she is taking on a new role as the President of the Board for the American Alpine Club.

Buck is familiar with the wide community of climbers in America. Through her work with The Access Fund, Buck travelled the country to meet with local volunteers and climbing clubs; she developed the affiliate program, started the Boulder Project, and worked on the Adopt-a-Crag campaign. In 2012 she became the first full-time employee of Camber Outdoors (then called the Outdoor Industries Women’s Coalition), a national organization that works toward equality for women through the outdoors, “from the backcountry to the boardroom,” as their statement says.

Buck is the second woman President of the AAC (Rock and Ice’s Executive Editor Alison Osius was the first, from 1997 to 1999). She feels strongly about continuing to strengthen the AAC’s ideals of “exploration, community, the feeling that we’re all in this together,” she says, but she maintains a present mindset and a gaze fixed on the future. “The frontier might be different today,” Buck says in a Q+A on the AAC Blog, “It might not be unexplored peaks, it might be how to leverage our core value system to embrace the evolving landscape of climbing.”

Phil Powers, CEO of the AAC, says that the the organization is in a “strong place financially,” allowing the club to turn its attention to questions of identity and inclusion, “Things like, ‘Who are we? Who do we represent? Who are the climbers of America?’” He notes that the Club has a fairly “one-dimensional” legacy shaped by people that were “mostly male, white, with a certain degree of privilege. That’s not to discredit those generations of climbers—they did wonderful things. But the population of climbers is changing, and we have to bend over backwards now to make sure that we are as welcoming as we can be.”

Buck’s track record in diversifying the outdoors positioned her perfectly for just such a leadership role.

One of the AAC’s top priorities for the coming year is designing a Climbing Instructor Certification Program. Buck is focused not just on who the program will be offered to, but also how it will be offered. “Because of the way women are socialized, we might need to ask them to come to the program rather than assume they will take the path that is offered,” Buck says. “For some, the very template [by which we conduct things] might not be recognizable.”

While her title has changed, Buck’s own core value system has stayed the same since that pivotal day on the 25-foot wood-panel YMCA wall. “When I bring that story up I hope I am normalizing opportunities that people have to get into climbing,” Buck says. The journey doesn’t have to begin at dawn in some glorious mountain range, she suggests. The journey begins wherever you are.