Horseracing has Churchill Downs, musicians have Carnegie Hall. Climbing has El Cap. The Captain’s granite splitters and pin-scarred dihedrals provide a karmic ego-crushing formula known intimately by Sadhus and Brahmins … and climbers. “Arrogance will find its own punishment,” observed Jim Bridwell. We pilgrimage for humility. I know I did.

With so many of the younger generation learning to climb in the gym, unaware of the tales of the Stonemasters or unable to identify Royal Robbins in a line-up, the question needs to be asked. Does El Cap matter?

El Cap matters because the history of climbing is inscribed, quite concretely, on her faces: rivets from Warren Harding, pin scars from Royal Robbins, Jim Bridwell’s hook scratchings, Tommy Caldwell’s blood and sweat, and, of course, seared into our minds are those photos of Honnold soloing much of the Nose and now Freerider. Jesus.

Climbing didn’t begin on El Cap, but it came of age there. And is still evolving.

El Cap is a beaut—a reticent if sloping proboscis (the Nose) angles gently to the pines; the lower left side of her face, looker’s left, is a wash of polished slab, while the upper half is a poised and sharpened guillotine. Simply gazing up has caused many premature bowel movements, one of my own included. Gradually diminishing in height, El Cap’s right side begins steep and is an early riser—the Dawn Wall—only to wear her blemishes proudly, the black diorite fracturing, but perfecting, her countenance ála kintsugi, the Japanese aesthetic that values brokenness.

Climbers mark El Cap by her features—the heart, the shield, the black dike, the boot. It is the perfect stage for pro and acolyte—the bullet-blue sky of the High Sierra the ideal proscenium. I first climbed El Cap when I was 22, with Pete Davis and Colter Chisum. We did Lurking Fear, the easiest aid route, but it was my first big wall and on Thanksgiving Ledge (oh the irony!), I feasted on three Jolly Ranchers for dinner, hitherto hoarded for ultimate pleasure. I was starving, my biceps and hamstrings cramping, and mice pitter-pattered over me as the long night drew its curtains, but I was content and I smiled that El Cap smile.

Taller granite faces in the world exist, tucked in the folds of the Himalaya, Baffin Island and other places unexplored, but none with easier access, higher quality rock or better weather, the latter a crucial ingredient to projecting and sending long, hard routes. But El Cap is also a junk-show princess. Dale Bard’s comment about Camp 6 being a great bivy in 1975, before it stank “like a lavatory,” is emblematic. Ugliness is overlooked when we’re infatuated. 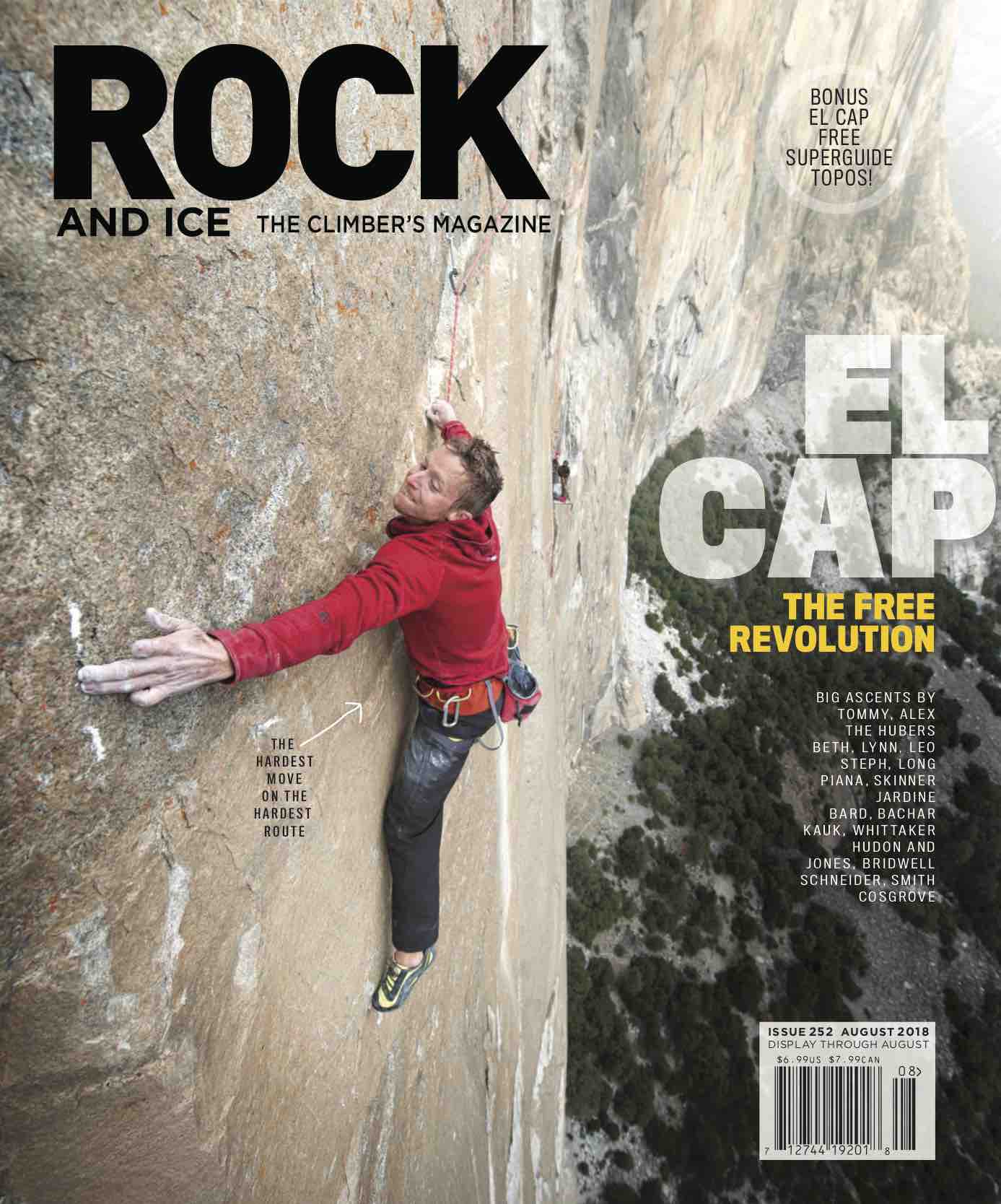 Just as nothing can stop the molten lava pouring from the netherworld in Hawaii, nothing is going to get in the way of current and future climbers turning El Cap into a multi-pitch gym. Not that it already isn’t. Almost. El Cap’s free routes are now on the radar of competition and sport climbers, such as Jorg Verhoeven, who has been racking up El Cap free routes over the past few years. Without question, some routes will always require a bag of iron, but the trend is unmistakable. “Back then [in the 1970s], it was a once-in-a-lifetime climb for most people. It was awe-inspiring,” says Mark Hudon in this issue’s “Free As Can Be.” “Now it’s more like 300 feet tall; people climb it before breakfast, then go bouldering.”

Free climbing on the Big Stone began in fits and starts: Bridwell and Stanton freeing the Stovelegs in 1968; Largo, Bridwell, Kauk, Bachar and company making their way to Mammoth Terraces in 1975 to create Freeblast; and, in a truly visionary adventure, Max Jones and Mark Hudon freeing all but 250 feet of the Salathé in 1979. It’s an extraordinary story. This issue on El Cap free climbing isn’t exhaustive, but the major milestones are accounted for.

El Cap was a sandbox for the earliest big wall climbers, witnessed the clean-climbing revolution, provided the perfect grounds for speed climbing and is now in the throes of its fourth act: big-wall free climbing (and free soloing). Alex Honnold says it best: “That’s the beauty of El Cap—it’s always there, ready to offer the next level of adventure.”

As you will see from the beautiful topo inside this issue—El Cap is crisscrossed with free routes. The El Cap guidebook is changing and the new lines being drawn pay little homage to the aid routes of old—free routes meander and cross whatever features necessary, often linking multiple pre-existing routes or variations thereof. This special issue—El Cap Free—honors the free-climbing revolution and the visionaries, eccentrics and dirtbags that made it possible.

Who Did It First? Style, Grades And Dispute In First Ascents