Suddenly, things
turned desperate. Option “Bad” was to reverse 1,000 feet of 5.7 at 13,000 feet, without ropes, under darkening late-autumn clouds. As I looked down,
lightning struck in the distance, a fat bolt of Zeus’ wrath unleashed on an innocent alpine ridge; I could feel the anger of the stricken wild flowers.
Perhaps I was next. Whippets of cold rain pattered the back of my neck, trickling down my spine as I perched there, chalking up for 10 minutes, shuffling
my feet. I was mulling, brooding, woolgathering, wondering about option “Worse”—mantel the loose refrigerator-sized block, unattached from the
cliff but somehow still there. Goddammit. A solid helping of that ol’ proverbial fork in the road. 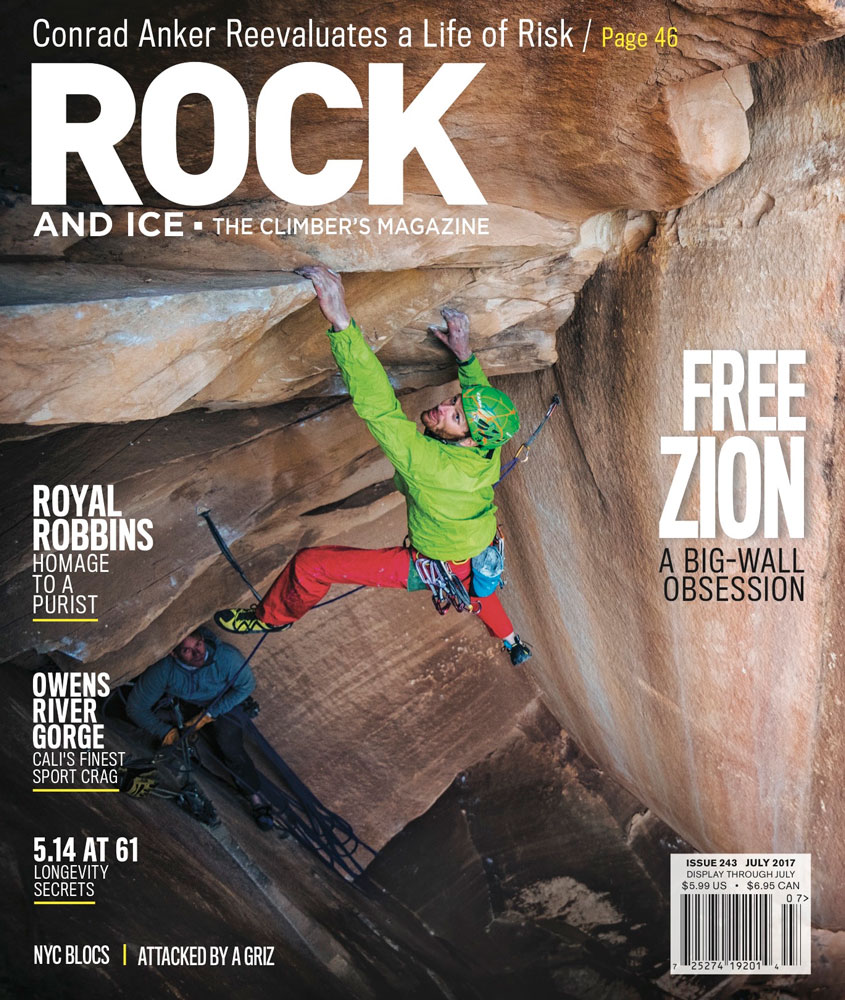 I manteled the block. As a civic duty to prevent someone from later dying while attempting that mantel,
I trundled the block. It was the best trundle of my life—a vertical paroxysm of splintering, baritone brokenness. As I learned that day—the
bigger the block, the more its absence will alter the cliff. When Royal Robbins passed this March, we lost a block that was lodged in our community. In our memoriam to Robbins (“A Royal Salute,”
page 46), we have gathered anecdotes from his closest partners, who recount stories otherwise not recorded. Royal’s idealism, talent and penchant for
innovation echo in all of his partners’ musings.

If only I had had some bolts and a cord that day … which reminds me how fun and non-life-threatening sport-climbing can be. With words by Peter Croft
and visuals by Bernd Zeugswetter, California’s Owens River Gorge is featured here in a stunning photo essay (“Gorge Thyself,” page 38) showcasing the
diversity and delight of clipping bolts in a top California sport-climbing destination. Likewise, Rob Pizem’s epic struggle with one of Zion’s biggest
walls (“Red Line,” page 56) will lure and inspire fellow 9-5ers to give it all you have, even if it means frozen toes and zinging through multiple
rounds of partners to establish a hardman’s desert masterpiece.

In “Mountain of Realization” (page 32) famed alpinist Conrad Anker recounts a similar fork in the road to mine, though his was much, much more severe—a
heart attack during his and David Lama’s attempt on Lunag-Ri, a 6,907 meter peak on the Nepal/Tibet border, the tallest unclimbed peak in the region.
Anker’s text is expedition-worthy courageous, questioning his own motivations and wondering if he had been selfish given familial duties. Was the heart
attack my clarion call? Anker ponders. With news of Ueli Steck’s death coming across my desk as I write this, Anker’s question of paying acute attention
to signs and symbols gains more weight … for all of us.

On a lighter but important note, in this issue Rock and Ice rolls out a new gear-review testing program. Starting with this issue, the equipment
that you find in Field Tested has been put through hell—50 pitches or 50 days’ worth. Perhaps more, never less. Although we have always used
gear in the field and based our comments on real performance, our new testing protocol will provide feedback on how well gear holds up to use. An important
point—gear isn’t getting any cheaper. Fifty days or 50 pitches of use will also reveal the nuances that separate the great stuff from the good.
As climbers, we want you to know that our gear reviews are thorough, and hope you find Field Tested more useful and more valuable than ever.

Not already a subscriber?