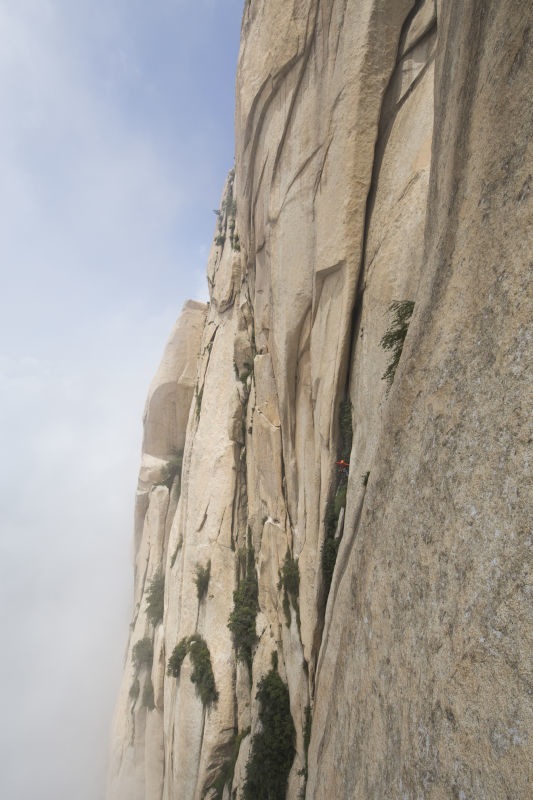 One man, eight days, 20 pitches, and nearly 2,000 feet of solo climbing—He Chuan, of China, pioneered a new line up the South Peak of Mt. Huashan in west China. Chuan named the route Climb Like You Are Dying (VI A3- 5.10+ R).

“It was a much harder climb [than] I anticipated,” said Chuan. “I had planned four days for the ascent, but I made it in eight days, totally beyond my anticipation.”

South Peak, at 7,067 feet, is the tallest of the five peaks that make up Mt. Huashan—known as one of China’s “Five Great Mountains” holding religious significance as pilgrimage destinations.

Chuan began his climb on July 12 after three days of preparation at the foot of South Peak. By using various rope-soloing methods, both free and aid climbing, Chuan averaged two to three pitches per day. It was a slow process since he would have to rappel each pitch after climbing it to clean his gear, and then ascend again—sometimes more than twice if his haul bag snagged.

At 2:30 a.m. on his seventh day climbing, Chuan reached the Chang Kong Cliff Road—a system of carved steps, via ferrata and planks bolted to the cliff face, often called the “World’s Most Dangerous” hiking trail. The trail leads to a Taoist temple built into the side of the mountain.

Chuan climbed one pitch above the trail, but concerned with the safety of the hikers below, decided to hold off until the foot-traffic decreased that night. At 8:00 p.m., he tried for the summit again but was hit by heavy rain.

Chuan spent the night in the temple and reach the summit of Mt. Huashan the next morning. 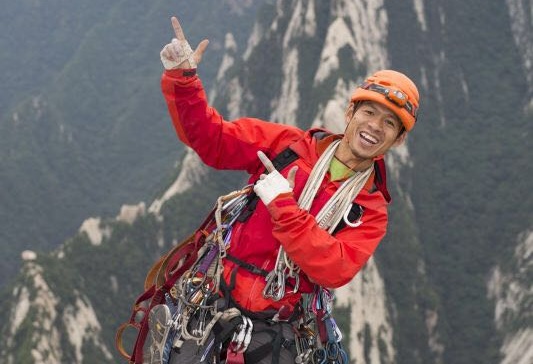 Vegetation was one of the biggest challenges of the climb. Chuan battled plants on every ledge and in every chimney. Prepared, he brought an ice axe to clean the earth from the cracks so he could place protection. For the 2,000-foot climb, he didn’t place a single bolt.

“Climbing makes me happy,” Chuan said. “Everyone can find his own King Line, no matter how hard the line is.”

Climb Like You Are Dying is the second route that Chuan has established on the South Peak of Mt. Huashan. Last year, he and Xiaofei Zhu made the first ascent of Never Give Up, the second route ever climbed on the massif. The first was Northern Celestial Masters on the West Peak, established by Leo Houlding in 2009.