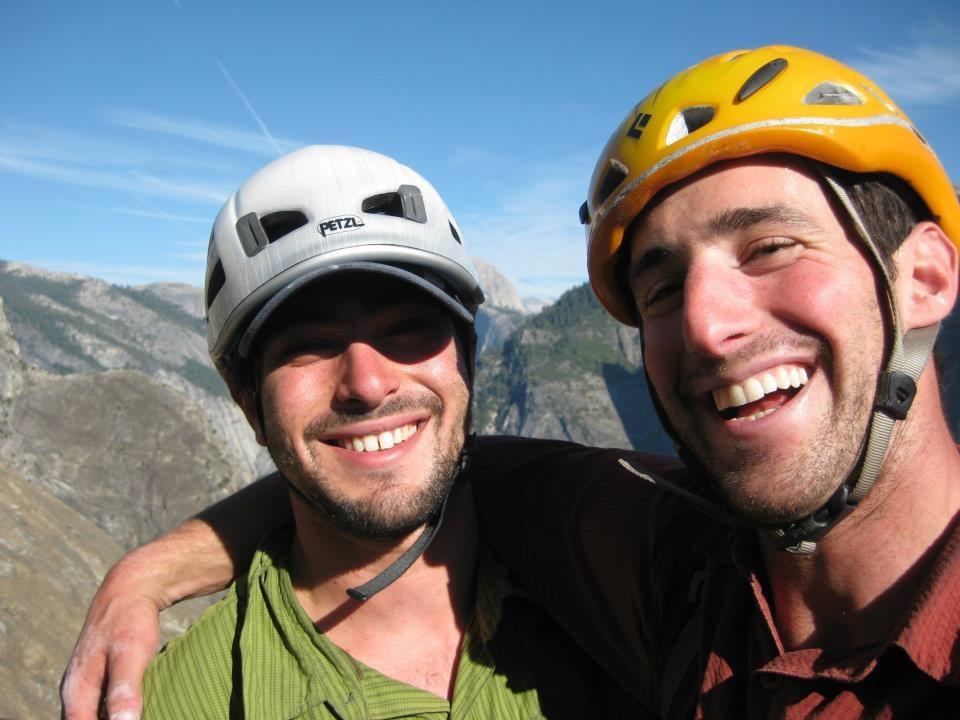 Author’s Note: Eitan Green mastered karate as a child, spoke four languages, rocked the drums and was a star Anthropology student who completed original research and wrote a thesis on global climbing communities. Somehow Eitan also had time to become an EMT before morning class while still having the energy to light up late-night parties.

I met Eitan when we both started at Colby College together in 2005, and saw him transition from a heady recreational climber into a professional mountain guide.

***
Eitan was introduced to climbing in 1994 when he was 8 years old. Looking to pass a rainy day during a vacation at Acadia National Park, Eitan’s father, Jeff, hired a local guide to take Eitan rappelling on Otter Cliffs. Jeff still has a photo of Eitan moments before scooting off of the abrupt edge of the sea-side granite cliff. A photo taken from that day shows a skinny kid from Needham, Massachusetts, wearing what would be now a great throw-back windbreaker and shorts exposing knobby knees.

In high school Eitan gained further experience in the wilderness by attending the Mountain School, an outdoor-based alternative to traditional high school hosted by Milton Academy. While he was still in high school, Eitan and friend Zach Summit through-hiked Vermont’s 270-mile Long Trail. After high school during a gap year, Eitan and Zach worked on an organic farm in the European Alps. Zach remembers one morning milking a herd of goats with Eitan in the pre-dawn light. The cresting sun illuminated an alpine ridge, revealing every feature with orange light and blue shadows. At that moment, Zach remembers, Eitan said he could find a way to live in the mountains if he worked hard enough for it.

At Colby, Eitan stood out from the preppy student body because he brought his own form of mountain culture to a rather homogenous private school. He was one of the few freshman who could and did grow a full beard. And Eitan wore only Carhartts, which always housed a pocket knife. Eitan’s sister Elana later explained that the Carhartts were a compromise: Eitan’s mom refused to let Eitan out of the house in sweatpants and Eitan refused to wear blue jeans.

Eitan treated his 90-square foot dorm room like a basecamp tent, filling it with plastic tubs of climbing gear. The walls were plastered with photographs from magazines, like Heinz Zak’s image of Alex Huber climbing in the clouds on Voie Petit. He’d hung a quote out of a magazine beside the image: “Coffee should be black as hell, strong as death, and sweet as love.”

“Eitan” in Hebrew means “strength,” but the connotations regard strength of character rather than physical. Between punishing training sessions on the college’s outmoded woody, Eitan loved to “get after it.” In one of his first seasons ice climbing, Eitan completed an ascent of the Cilley-Barber Route (IV WI4) on Mt. Katahdin during the winter break. For many, the 16-mile ski approach and arctic camping conditions are enough to do once; however, Eitan returned the next year to try alpine mixed routes. Over spring breaks, Eitan would travel to Red Rocks and climb long classics such as Black Orpheus (IV 5.10a) and sport climb up to hard 5.12. With each of these trips, Eitan seemed to take quantum leaps in his climbing abilities. When taking stock of his climbing accomplishments and seemingly simultaneously planning the next trip, Eitan often said, “We have nothing to apologize for.” Presumably, Eitan said this to resolve the healthy self-doubt most climbers feel when sizing up a daunting new objective. However, Eitan’s “apologies” probably also centered around his own conflict in balancing the growing importance of climbing in his life.

As “galactic emperor” of the Colby Mountaineering Club, Eitan Green found a way for the school to pay for Micah Dash to stop in Waterville, Maine, on October 30, 2008 during his All Access Tour. After Micah spoke about his various ascents with Johnny Copp, Micah and Eitan sat in the campus pub and talked about “making it” as a professional climber.

“I feel bad for Chris Sharma,” a tipsy Micah Dash said to Eitan. “I mean, the guy’s thing is climbing the hardest routes in the world—he has to stay in Olympic shape. To climb 5.15, he has to be the best.” After a swig of cheap beer, Micah continued, “All I have to do to be sponsored is climb scary 5.11 in the mountains.”

The next day, Halloween, Micah and Eitan climbed together at Shagg Crag, arriving at Ginseng Route—Eitan’s project—late in the day. Micah botched the onsight. On his second attempt he fell at the crux. By his third attempt, Micah was worked, but wanted to complete the route. The sun cast an orange glow over the white cliff as Micah scrapped his way to a send. Hiking out in the dark, Micah said he had really wanted to send Ginseng because he didn’t foresee returning to this obscure cliff in Maine.

In their brief encounter, Micah seemed to take a shine to Eitan, and Eitan to him. Only after Micah suggested Eitan would high-step better in climbing pants did Eitan finally ditch the Carhartts. The two men shared a compact build and similar sense of humor about suffering in the mountains. Eitan and Micah both joked often about growing up in Jewish households. Eitan often repeated Micah’s joke, “I’ve worn yarmulkes bigger than this bivy spot.”

***
On November 5, five days after seeing Micah battle up Ginseng, Eitan floated the route. After driving home that day, Eitan went for a 13-mile training run to celebrate.

By the time of his death, Eitan had climbed Rainier over 40 times, had new-routed in the Alaska Range, climbed Exocet in Patagonia and skied off the summit of Mont Blanc. The avalanche that killed him and five other climbers on Liberty Ridge on May 31 cut short a promising climbing career.

But it is the last line of Eitan’s bio hints at all the potential cut short by Eitan’s untimely death. “When not guiding, climbing or training,” his bio reads, “Eitan enjoys investigating the many parallels between risk management in the mountains and in financial markets.” In his last years, Eitan and his father—a financial-risk manager—discussed ways the guiding services could improve their bottom lines by improving compensation and benefits for guides. Whether or not Eitan could have implemented his ideas, the climbing world is at a loss.

You can see Eitan’s thesis HERE.