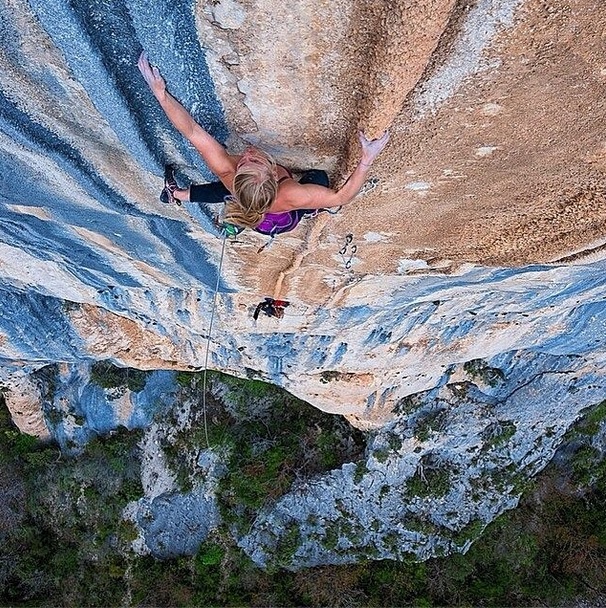 Tom et Je Ris lies on the east side of the Verdon and was established by local legend Bruno Clement. This 200-foot, single pitch sport climb begins from a hanging belay and follows a line of massive tufas to the top of the gorge with runnouts up to 30 feet.

“The entire experience is much more involved than a normal sport climb,” Harrington wrote in an e-mail to Rock and Ice. “It’s more of a full-on adventure mission … I couldn’t focus on the climbing because I was letting the exposure and fear get to me.”

Her first attempts on Tom et Je Ris were unsuccessful, even with Matt Segal’s “psyche” and encouragement to get over her fear and hesitation about the route, according to Harrington. Segal managed to send the route on his last day of three week trip at the end of April, while Harrington went to train in Céüse, France.

“The trip was all Matt’s idea, and he told me one of the main inspirations for the trip was that route,” Harrington wrote. “We tried for two days then he extended his ticket a few more days to try and send.”

Just months ago, Harrington, 27, could be found skiing in Squaw Valley, California, and climbing in the Himalaya, where much of her sport climbing endurance was lost.

“I would get pumped even at the massive jug rest half way up the route,” Harrington wrote. “One time I was literally holding onto the biggest holds on the route and couldn’t clip the bolt. I even tried to grab the draw but was too pumped—it was terrifying!”

Harrington climbed as much as possible while in Céüse, projecting high-grade routes and finishing the day by doing as many laps as she could on easier routes. Her fitness returned quickly, according to Harrington.

Determined to give Tom et Je Ris another “last ditch effort,” Harrington returned to the Gorge with her boyfriend and belayer, Adrian Ballinger. However, on her first go, Harrington slipped off near the first bolt and then the third, and contemplated giving up.

“I was pretty emotionally spent and still feeling nervous,” Harrington wrote. “I had lost all confidence and belief in myself. But sometimes that negativity actually works in my favor and helps me let go of the expectations and enables me to just climb.

On June 4, she gave it her “last try best try,” and surprised herself by executing the moves and sending the route . Tom et Je Ris is the hardest climb Harrington has sent recently, having climbed Waka Flocka (5.14b) in Rifle, Colorado, two and a half years ago.

Harrington, despite beginning her climbing career as a competition/sport climber, has recently been exploring other aspects of the sport, culminating in an ascent of Mount Everest on May 25, 2012.

“Mostly I proved to myself that I can still rock climb hard while trying to expand my skills and give some of my energy to learning other styles of climbing (trad, big wall, alpine, etc.),” Harrington wrote. “But it takes a certain discipline, dedication and balance that I’m still figuring out.”

Harrington will head home to California next week to trad and big wall climb, hoping to return to Morocco in September with Hazel Findlay to continue projecting the 18-pitch Babel (5.13a).