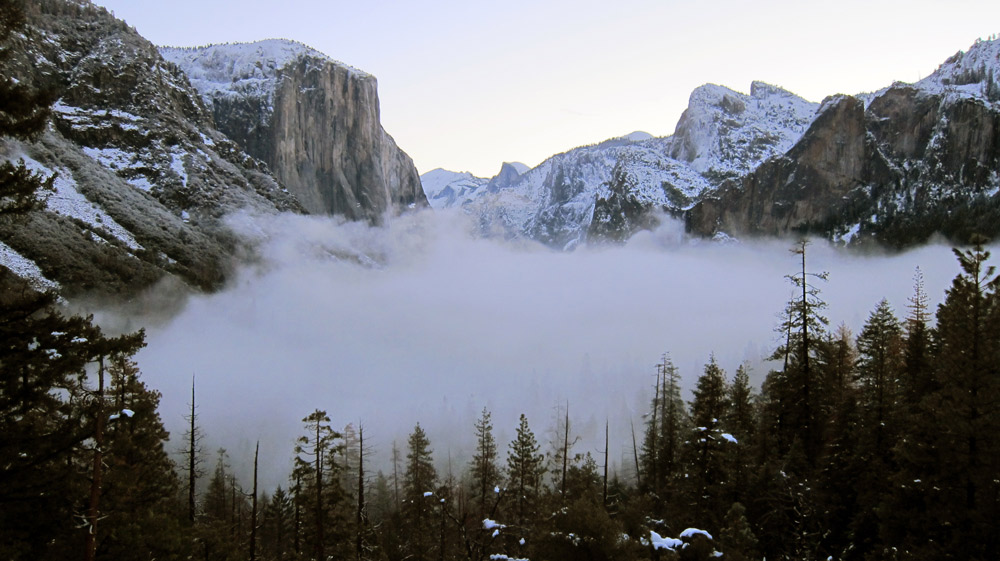 Yosemite’s Widow’s Tears (WI5), the lower 48’s longest and most elusive ice climb, has seen at least 10 ascents, including two free-solos, in the last weeks—it’s biggest season
yet.

The 1,000-foot ice flow, first climbed by Mark Chapman and Kevin Worrall in 1975, only forms under the right conditions—usually after a large snowfall
followed by a cold snap and sunny days. It can go years without coming in, and when it does, it’s quick to disappear. The last time it formed was in
2013. So this year, when word spread that Widow’s Tears was in and had been climbed, Aivaras ‘Aiva’ Sajus jumped at the opportunity.

“Widow’s Tears has always been this elusive, almost mystical ice climb in Yosemite,” Sajus tells Rock and Ice. “Living in northern California
close to Yosemite, I always wanted to climb it.”

Sajus, 37, got his chance on January 10. He had just returned from an ice climbing trip to Colorado, when he heard that Widow’s Tears was in.
“I contacted a few climbing friends, but only Travis [Miranda] was available to go and look at it the following weekend,” Sajus says. The two had never
shared a rope together, but knew each other from the climbing gym. 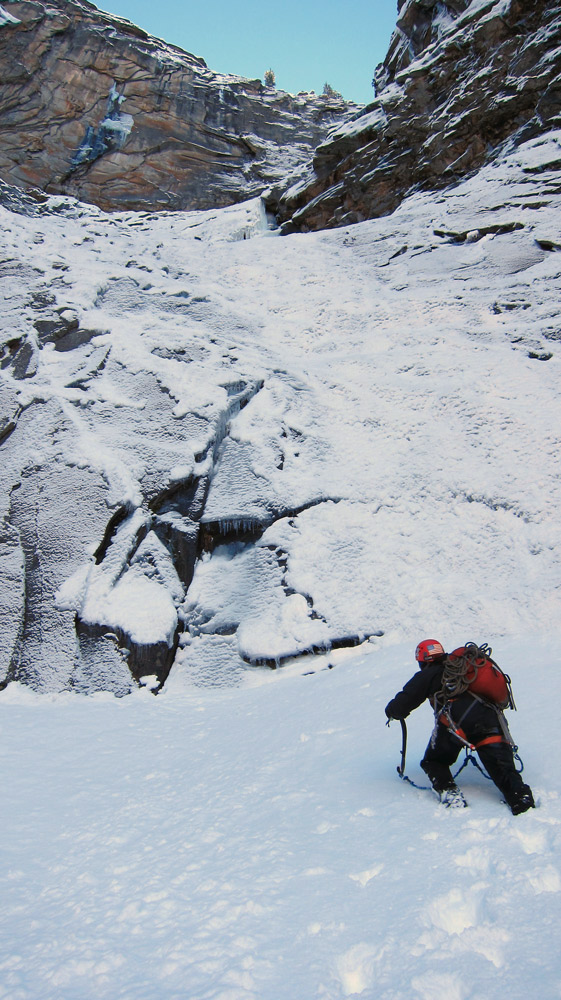 “Aiva called
up and said, ‘Hey, you want to do Widow’s Tears?’” says Miranda, 29, from Oakland, California. “I’m more of an alpine person and hadn’t climbed
ice in awhile, but I said I was interested. You don’t pass up on the opportunity to climb Widow’s Tears, you know?”

“I was excited that I would get to lead every pitch,” says Sajus.

They met in the Valley at 5 a.m. on Sunday morning, but since neither of them knew exactly where the climb was, they had to wait for daylight. Around 8
a.m., after driving around Yosemite for an hour, they were post-holing through “knee- to waist-deep” snow on the approach. By 10 a.m., they were on
route.

“We started climbing way later than we should have,” says Sajus, “but we thought this might be our only chance to climb Widow’s Tears.”

Twelve hours later, after climbing the last four pitches in the dark, Sajus topped out. “I looked at my watch.
It was 10 p.m.,” he says. “Everything was frozen. It probably took me 20 minutes to untie my knot—I almost ended up having to cut it off.”

An hour or so later, an exhausted Miranda joined Sajus at the summit. “The last four pitches blurred together,” says Miranda. “We didn’t really rest the
entire climb and I was definitely gripping a little too hard to say the least.”

Widow’s Tears is usually climbed in 11 or 12 pitches, but Sajus and Miranda climbed it in seven by running out a 70-meter rope (and they had soloed
the initial slabs leading up to the vertical ice). Sajus led the last five pitches.

“The climb itself also took us longer than expected mainly due to really bad ice conditions except for the last two pitches, which were still in decent
shape,” he says. “At one point during the climb on a really dicey pitch my foot got caught in a sling and I took a 15 feet lead fall as I was trying
to wiggle it out.

“A decent screw held [the fall] and we pressed on.”

The biggest challenge was finding places to belay, Sajus explains. “I am glad we took a set of cams as I ended up having to lead to some rock and dig out
cracks to place a few cams when no decent ice was available for screws,” he says. Despite the terrible conditions, they didn’t experience any rock
or ice fall from above. 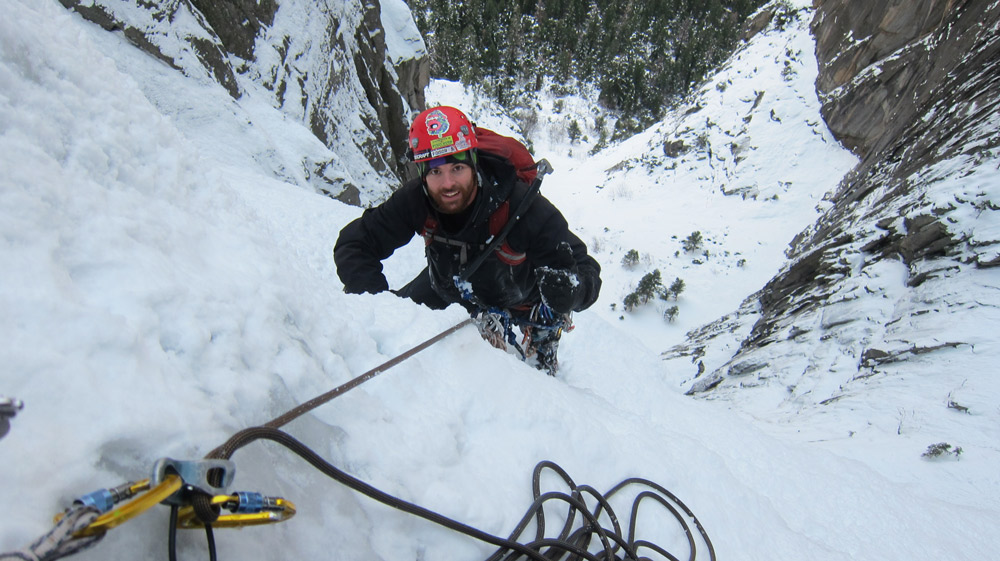 Out of food, out of water and now nearing midnight, Sajus and Miranda still had the descent.

“That’s when the real epic began,” says Miranda, “It was dark and we couldn’t see the cliffs below, so it was difficult to find a way down. And we had
to plow through waist-deep snow the entire time. It was the worst snow conditions I’ve ever been in. It was gnarly. Pretty much nasty.”

Ten hours later, at 10 a.m., 26 hours after they set out on the approach, they were back at the car.

“We both missed work the next day,” says Sajus, “but it was all worth it. We just climbed Widow’s Tears.” 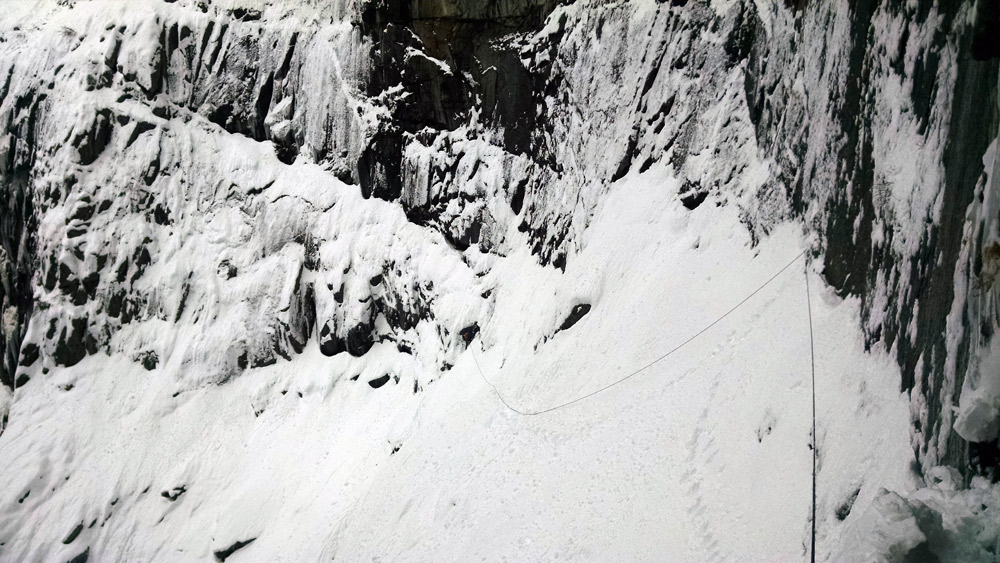 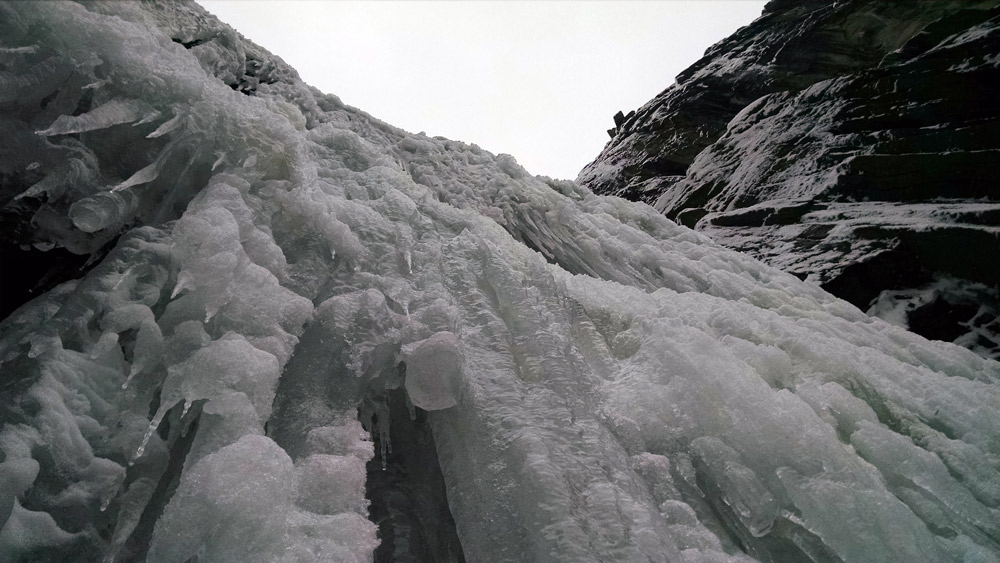 Widow’s Tears has seen around 30 ascents since Mark Chapman and Kevin Worrall’s first ascent in 1975. This winter, at least 10 people have
climbed the route, making it the climb’s biggest season yet. Two separate parties have reported climbing Widow’s Tears on December 31,
2015. On New Years Day, Vitaliy Musiyenko free-soloed the route in 2 hours 40 minutes. A Valley local, who prefers to remain anonymous, told Alpinist that
he soloed Widow’s Tears the day after Musiyenko. Brian Biega and Jimmy Haden also climbed the route on January 2.

With rising temperatures and rain in the forecast, Aivaras Sajus and Travis Miranda’s ascent on January 10 might be the Widow’s Tears’ last
ascent for some time.

It’ll be back to the waiting game, possibly years, until it’s ripe again.