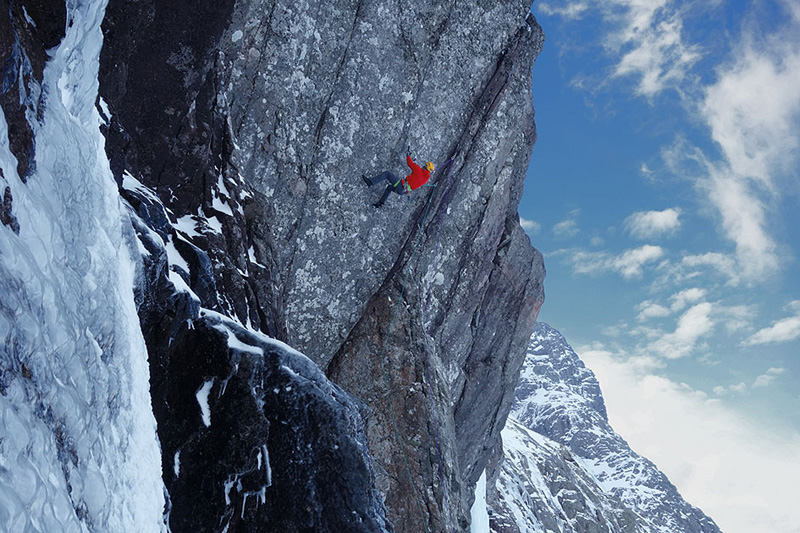 MacLeod’s ascents included a traditionally protected system of roof cracks in the Cascades of Ben Nevis, graded M10+/11 and named White Noise. MacLeod’s second reported FA is an often-tried line on the Breneva Face of Ben Nevis’ North East Buttress dubbed The Snotter, which has been referred to as “the last great unclimbed icefall on Ben Nevis.” The Snotter took MacLeod two attempts and he gave the climb the Scottish grade of VIII, 8. “One of the best winter climbs I’ve done on the Ben,” wrote MacLeod of The Snotter.

Almost immediately, however, notable sources began to question the validity of MacLeod’s ascents.

“Both my ascents have been questioned,” MacLeod told Rock and Ice. “The Snotter for not being in condition, and White Noise for being not acceptable as a climb at all.”

The “condition” MacLeod is referring to is “Scottish conditions”— a local ethic that involves waiting until the route is properly covered in snow and ice before climbing it.

Simon Richardson, who runs the blog Scottishwinter.com, was quick to dispute The Snotter’s validity as a proper Scottish winter climb.

“The technical crux of the route up overhanging cracks was climbed on dry sunny rock to reach five meters of vertical ice,” wrote Richardson. “The route was given a Scottish winter grade, but in my opinion it is not a Scottish winter route and I will not be recording it as such.”

Richardson argues that The Snotter’s technical crux does in fact ice over during some days of the season and that the icefall also forms as well.

MacLeod followed the dispute with his own blog post and argued, “I deliberately went on the route because the recent sunny conditions has been good for helping the grooves below the icicles become iced. In the 55-meter crux pitch, around 47 meters was climbed on water ice, with 6 meters crossing a grossly overhanging wall underneath the roof to get to the icicle.”

MacLeod explains that because he waited for the proper icy conditions for some sections of the route, the overhanging wall was pretty dry. “My thinking was that this is par for the course for this type of route. The sun helps more ice form, but at the expense of the rime. My interpretation (which may be ‘wrong’ if such a judgment can truly be made) of Scottish winter conditions is that basically the route must be wintery in appearance. If it was nearly all dry mixed with a little ice, it would be outside that definition and I would have come back another time. But the reality was the pitch was nearly all ice with a short section of dry rock.”

The gray area of Scottish winter climbing ethics is an interesting debate. Ian Parnell, another well-known U.K. climber also discredits The Snotter as a winter climb. He writes on his blog, “The ‘magic’ at the heart of Scottish winter climbing arises not just from this country’s great landscape, it’s challenging weather or it’s world class routes but largely from a universally adopted ethical approach. The key point being that routes should only be climbed in ‘true winter conditions.’”

Parnell admits that this ethic is a fine line and perhaps the ethical code gets broken every season, however, his argument is that this time “the climber involved is the most influential climber in the U.K. and the flag bearer for Scottish climbing on the international stage.”

Parnell also claims that MacLeod’s White Noise is unacceptable as a winter route. He explains that the route can be climbed any time of year. He writes, “Dry tool routes have a tenuous place in British climbing but surely not on our greatest mountain.”

Parnell continues by writing, “If White Noise had been climbed in a quarry it would have been applauded, if it had been climbed in a quiet Glen on a low profile natural crag then it would have been silently ignored, but [doing it] right in front of every climber passing by the CIC hut is as provocative and inappropriate as any indiscretion I can think of in Scottish winter’s very colorful history.”

One argument that Simon Richardson cites for upholding the ethics of Scottish winter climbing is that climbing in full “winter” conditions is more difficult. He writes, “What’s the big deal about Scottish winter ethics? Quite simply, climbing bare rock with axes and crampons is easier than climbing it when it has a wintry appearance.”

This point seems debatable. However, MacLeod expressed his own opinion in an e-mail to Rock and Ice.

“Sometimes the rock being hoared/iced makes it harder (by obscuring hooks and gear placements), sometimes it makes it easier (by making hooks better),” wrote MacLeod. “Most of the time it doesn’t make a vast difference but I’m sure people would argue on that one.”

MacLeod also expresses his opinion regarding White Noise explaining that the roof of the route would never become white with snow and ice. Though MacLeod claims to “be the wrong man” to define Scottish winter conditions, he did his best to explain the ethical code.

“For the easier routes, which are vertical or less it’s not that much of an issue, we just wait until they get white,” he writes. “But to climb the super steep stuff, it means that some roofs become effectively off limits. It could be argued that if you wait patiently, they will eventually get white for a day in exceptionally snowy conditions. That’s easy to say if it’s not you doing the waiting.”

MacLeod has chosen to take down his blog post featuring the two routes, however, and suggests in a follow-up post that people should forget about them. But adds, “They still exist of course, in my memory as great days and two of the most fun climbs I’ve done in a while. Nothing more ultimately matters. Anyone else is welcome to climb them as first ascents if they feel those ascents are more worthy.”

Simon Richardson has also announced that he too will take down his initial blog post regarding the matter writing, “Dave has responded with dignity to the challenge around The Snotter. He recommends that people forget about it. I will do the same, and delete this, and the original post, in a few days time.”

Though this particular dispute seems to have been amicably resolved, what do you think of the rule? Should an ascent only be counted if it’s completed in “Scottish conditions?” For that matter, do winter conditions always make a route more difficult, or are there times when a coating of snow and ice actually reduce the difficulty? Is Scotland the only country that practices this ethical code? Feel free to comment below…