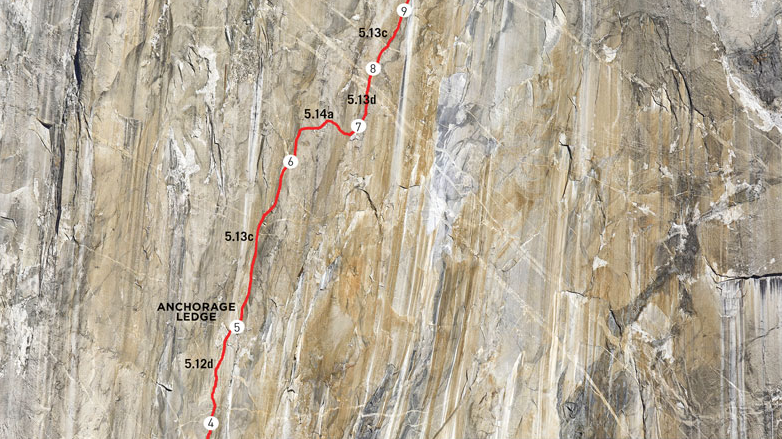 Click here for the full Dawn Wall topo..” title=”Pitches 5 through 9 of the Dawn Wall, El Capitan, Yosemite. Click here for the full Dawn Wall topo..”>“It was kind of exciting on pitch 8 [5.13d], which is like super sharp,” he said in the video. “It
was kind of getting warmer, and I spent two tries and I was like thinking, hmm, maybe my skin isn’t really good enough to do it, which would
be pretty complicated. Luckily, after I good fight, I did it. And also did quite easily pitch 9 [5.13c]. And now we are resting for tomorrow.”

After seven years and a final 19-day push, Tommy Caldwell and Kevin Jorgeson were first to climb the Dawn Wall. Their final push from December 27, 2014 to January 14, 2015 captured the attention
of not only the climbing community, but also the world at large, and the Dawn Wall has yet to be repeated.

Ondra began exploring the route’s 32 pitches,
by a mix of free- and aid-climbing techniques on October 17. On November 3, he and Blazek, both from the Czech Republic, topped out the 3,000-foot wall. Ondra went back up to work the crux pitches and then took a few rest days before for his final
push today.