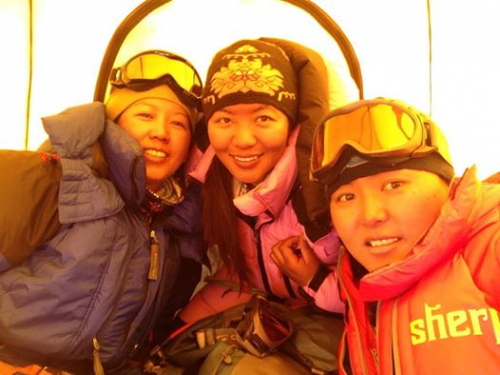 A team of three Nepalese women have summited the second highest mountain in the world, climbing K2 (8611 meters) at 3:35 p.m. on July 26.

The expedition, which consisted of Maya Sherpa, Pasang Lhamu Sherpa and Dawa Yangzum Sherpa, was the first female Nepalese team to summit K2. According to their website, K2Expedition2014.org, the women were climbing to raise awareness of climate change.

“This team is fiercely dedicated to fighting climate change and sustainable development in [the] Himalayas,” states the website.

The female team’s ascent also coincided with the 60th anniversary of K2’s first ascent, carried out by Italian climbers Lino Lacedelli and Achille Compagnoni on July 31, 1954.

The Nepalese women have safely descended K2 and are reportedly leaving base camp today.

“[W]e want to release our summit picture only after we meet the press in Kathmandu,” posted the team on their website. “Till then be patient everyone. It’s surprise.”