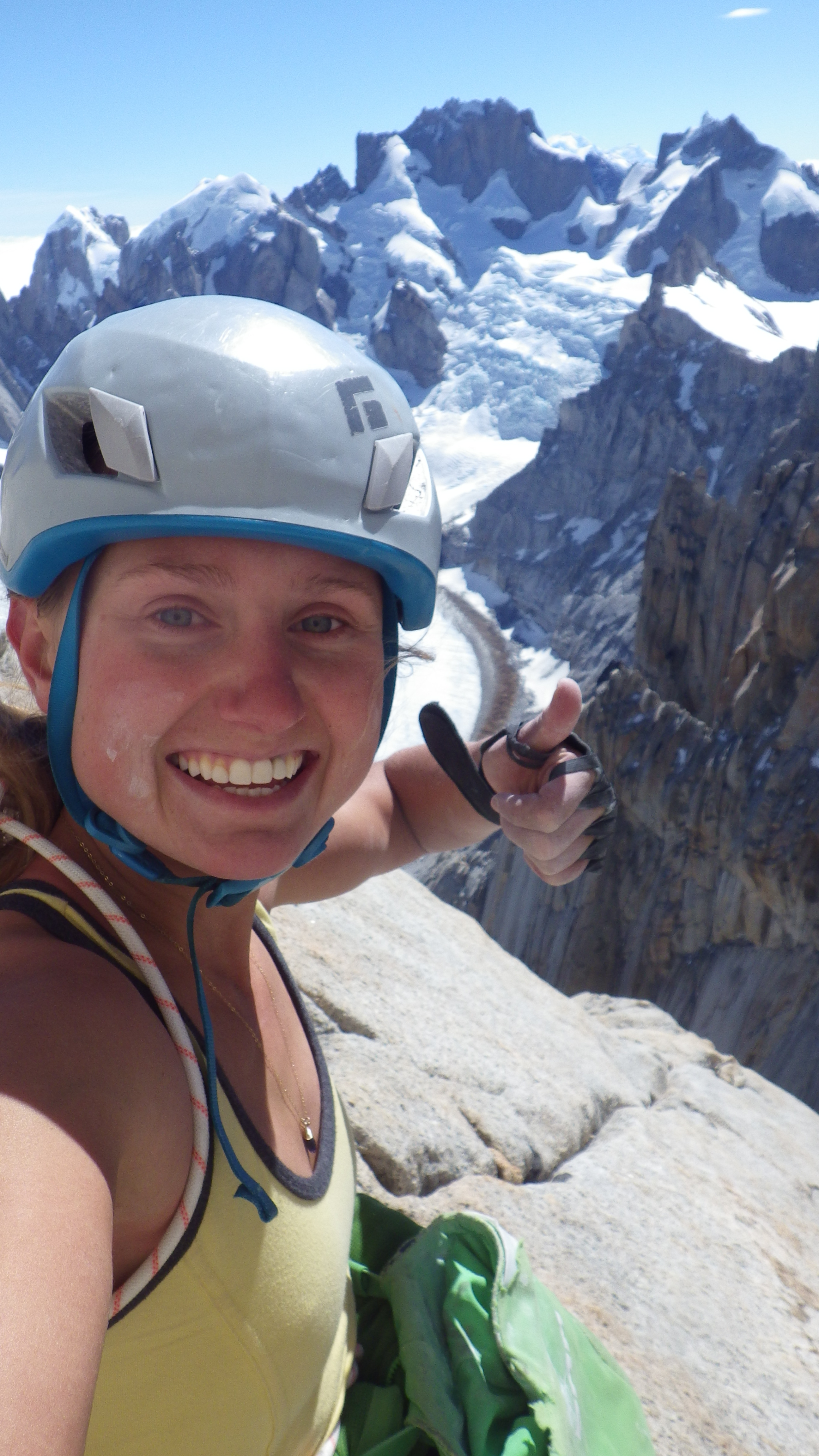 With radiant sun warming her shoulders and chalk smeared across her face, Brette Harrington paused to take a selfie near the top of Aguja Saint-Exupery—an 8,000-foot granite tower in the Fitz Roy massif, El Chaltén, Patagonia.

In three hours, Harrington, 23, of Lake Tahoe, California, completed the first free-solo ascent of the 2,500-foot Chiaro di Luna (5.11a), becoming the first woman to free-solo a tower in the Fitz Roy massif.

“I am quite proud of this ascent,” Harrington tells Rock and Ice. “It was a project that I had envisioned and it always feels good to follow through with your inspirations.”

According to pataclimb.com, Chiaro di Luna—approximately 20 pitches—is one of the best free routes of its grade in the area. The route follows a winding path of golden granite up the northwest buttress of Aguja Saint-Exupery. Three Italian climbers, Maurizio Giordani, Rosanna Manfrini and Sergio Valentini, made the first ascent in 1987. The Italian team descended the tower in moonlight, which led to the route’s name.

Harrington arrived in El Chaltén on the 15th of January, and says her objective came to mind early in her trip. “Honestly, my first glance at Chiaro di Luna, I thought, ‘Wow, that would make for an incredible free solo’,” says Harrington.

On February 20, the night before her solo, it rained nonstop. The sky remained misty well into the morning so Harrington started later than planned, hoping the sun would eventually dry the route.

She found the lower dihedral, a crux of the route, running with water. “I had to pay extra close attention to my body positioning in this part,” she says.

For Harrington, passing each crux was the most exciting aspect of the climb.“I think this was even better than reaching the summit for me,” she says,”Although that was nice too.”

After Chiaro di Luna, Harrington twisted her ankle and was unable to return to the mountains during the last two days of her trip.

“I’m not bummed, however,” Harrington says, “because I have climbed so much this season.” 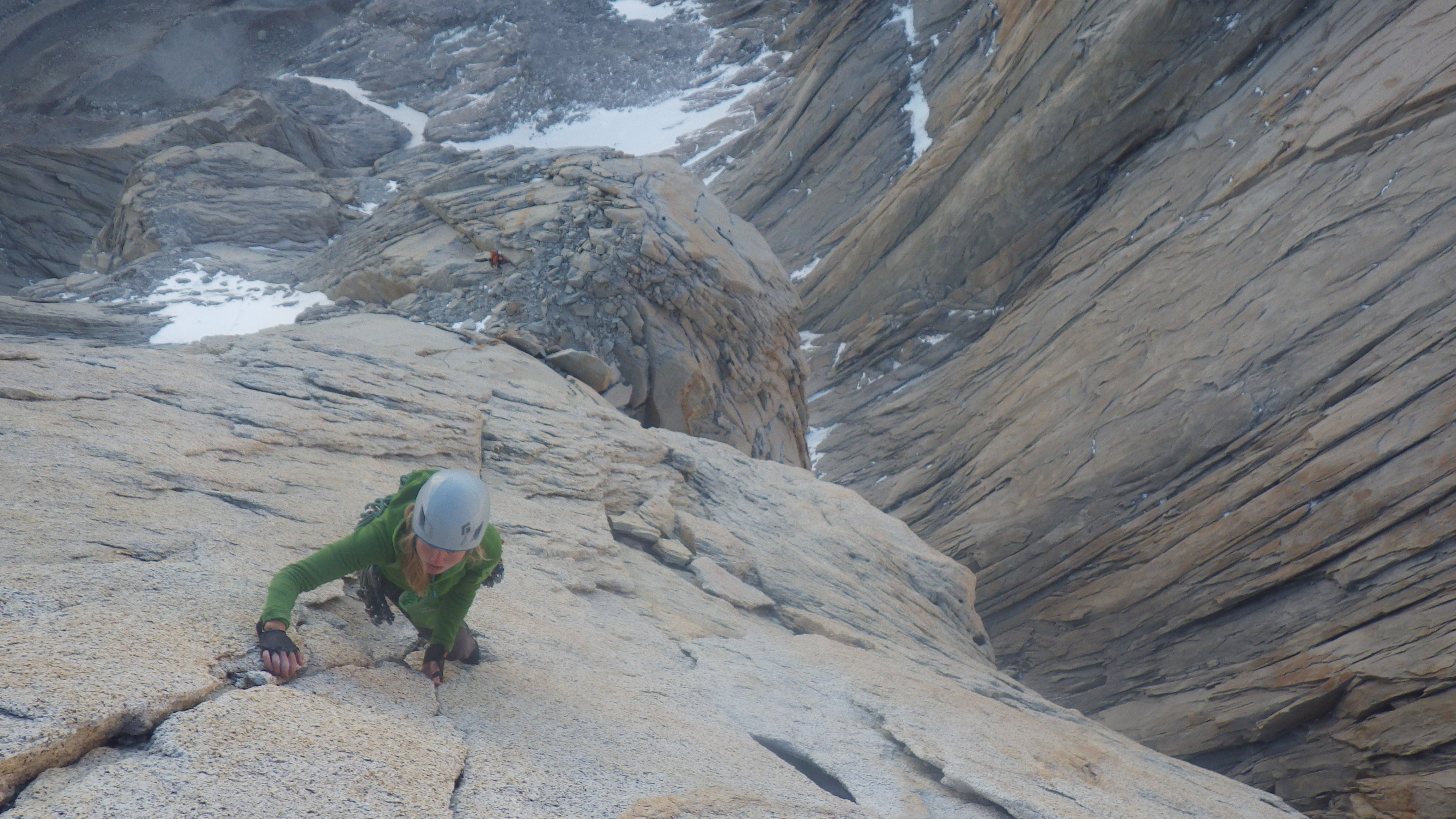 In addition to climbing Chiaro di Luna twice—once with Marc-André Leclerc to scope out the cruxes and once solo—Harrington has climbed on the west face and northeast ridge of Guillaumet; Rubio y Azul (1,150 feet, 5.11b) on Aguja Medialuna in a single push from El Chaltén to El Chaltén in 22 hours; Corallo (5.12b), the only line up the west face of Aguja Rafael Juarez; and Mate, Porro y todo lo Demás, a 3,000-foot 5.11b on the North Pillar of Fitz Roy, in a day.

This was Harrington’s first trip to Patagonia. She has been climbing for over eight years and graduated from the University of British Columbia in Vancouver in December, before traveling to Patagonia.