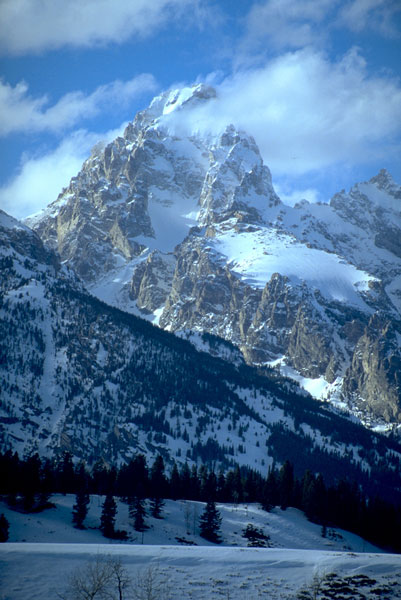 On March 31, Greg Collins and Brendan O’Neill made a first ski descent of the North Face of the Grand Teton. The two are professional mountain guides and Collins had previously put up a new climbing route on the North Face called The Golden Pillar (5.12).

“The north face has obvious appeal, it’s a steep nasty face with a long colorful history,” said O’Neill. “We had skied a new line on Mount Owen earlier this winter which gave us agood current view of the route and the closer we looked at it the moreskiable it appeared”

Collins and O’Neill started out by ascending the Grand (13,770 feet) via the Tepee Glacier and Stetner, Chevy and Ford Couloirs in seven hours.

“It was in ‘easy’ condition,” Collins said. “We free soloed with one ice tool.”

They then rappelled from the top, which had been blown clear of snow, and skied a series of ledges. “We rappelled to the bottom of the ‘Pendulum Pitch’ and began skiing this very exposed ledge,” said Collins. He describes the crux as a “5.5 slab.”

“The hardest part was finding cracks and building anchors to descend,” said O’Neill. “Thecrux skiing required some tricky exposed side stepping and straightlining a narrow pinch ”

They used no rope in any of the skiing. Their total time for ascent and descent was 15 hours.