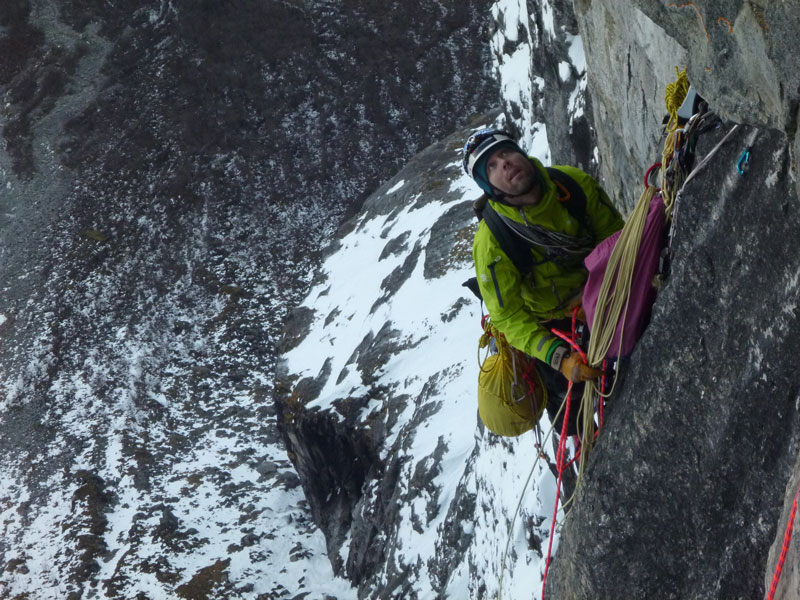 Kirkpatrick spent 14 days on the wall with Norwegian climbers Tormod Granheim and Aleksander Gamme, both of whom had never lead a traditional pitch before the climb.

“It’s hard to find anyone who wants to climb the wall due to it’s reputation for being dangerous,” Kirkpatrick writes in an email to this magazine. “I was forced to find partners who just knew enough to try, but not enough to know better.”

Kirkpatrick’s success in January marks the first technical winter ascent of the Troll Wall, Europe’s tallest vertical wall. While Norwegian climbers Rolf Bae, Sigurd Felde, Sigurd Backe, and Trym A. Saland made the third overall ascent in 2007, they failed to finish by March 21st, the technical cut-off date for winter.

This was Kirkpatrick’s fifth attempt on the route in the course of the last 15 years. Two of his previous attempts were in winter. On his first winter attempt, he had to retreat when his partner, Paul Ramsden, got injured. On his second attempt–when he tried to solo the route–he failed due to lack of water, time, and the right size drill bits. Kirkpatrick also turned back on the solo attempt because he “had a bad feeling” on the last 30 meters of the climb. His camera spontaneously turned on with a clip of his son saying “Dad–get away.”

For their successful winter ascent, Kirkpatrick’s team aided roughly 90 percent of the climb and freed the rest. Climbing in conditions down to -4 degrees Fahrenheit (-20 Celsius), the team fixed its way up the wall moving slowly due to the limited daylight and the cold. Kirkpatrick led the vast majority of the route while teaching his partners big wall climbing skills along the way.

“This may seem like a rather odd/foolhardy thing to do, but then I have a lot of experience in climbing with ‘non-qualified” partners, and know that you should judge a potential partner not by their ability to tie knots but by their other attributes first: sense of humor, resilience, a track record of having performed in a trying environment,” Kirkpatrick writes on his blog.

“How did the big wall students get on?” Kirkpatrick continues. “Well apart from being a great deal of contraband that made hauling even harder than usual (we had 10 litres of fuel left, as long as a large frozen salmon, bacon, a solar panel, enough batteries to power a small city), they soon got the hang of big wall life, dropping very little and soon adapting to life on a wall. I look forward to climbing with them again.” 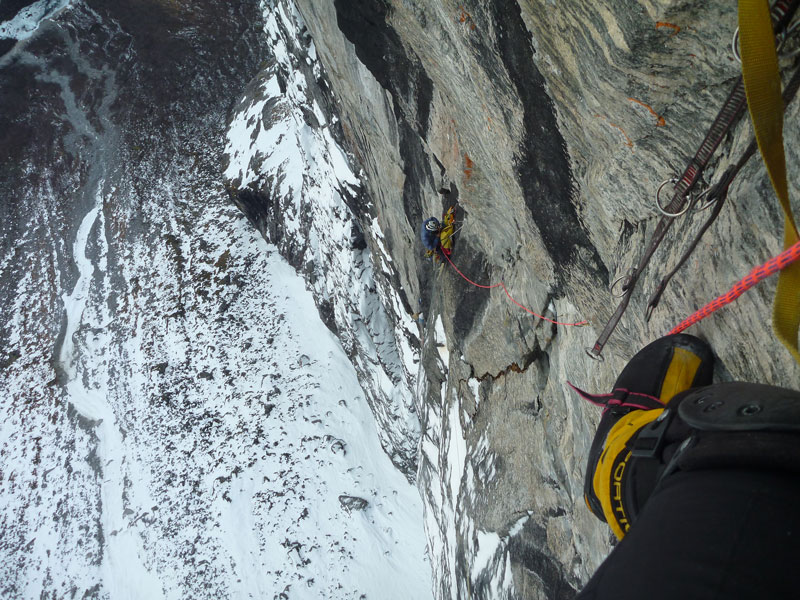 Check out an interview with Kirkpatrick below: