The fourth IFSC Bouldering World Cup took place in front of a sold-out crowd in Hachioji-Tokyo, Japan last weekend. The Japanese
team delighted their home crowd with four podium finishes: Akiyo Noguchi and Miho Nonaka taking Silver and Bronze in the Women’s event and Tomoa Narasaki
and Keita Watabe in the Men’s. The Gold medals went to Janja Garnbret of Slovenia and Aleksei Rubtsov of Russia.

In the Women’s bouldering, the reigning season champion Shauna Coxsey (GBR) and last week’s winner in Nanjing, started strong by flashing every boulder in the qualification round. The 18-year old Garnbret, who won the World Cup round
in Chongqing last month,
was close on her tail with five tops in six attempts. Noguchi and Nonaka also qualified with four tops each. In the Semi Finals Garnbret and Noguchi
were the only female competitors to top all four problems and Coxsey made the Finals with a flash of the last problem.

The Women’s Finals was full throttle from the offset, with all six female athletes flashing W1 involving a double-handed dyno and a technical finish. Garnbret
and Noguchi then jostled for first place, with Noguchi taking the lead after flashing W2. Garnbret regained the lead with her flash of the awkward
W3, only for Noguchi to inch ahead with a flash of the powerful final problem. Garnbret needed to top W4 in less than five attempts to claim the top
spot and did so smoothly with a flash, thereby ticking all four Final’s problems. Nonaka, beat Coxsey to 3rd with her top of W3 and a flash of W4.

In the Men’s event, last week’s Chongqing winner Watabe entered the Final in first place as the only athlete to top all four problems in the Semi Final.
In Finals, Watabe and Rubtsov both topped M2 and M3, putting the pressure on Narasaki, who was the only competitor to top M1 and to flash M2 and M3.
Again, it was the final problem that was to decide the podium positions and it was Rubtsov’s link up of M4’s powerful moves and Narasaki’s failure
to do so that placed the Russian in 1st. Watabe also failed to complete the final problem and placed 3rd.

In the current World Ranking, Shauna Coxsey has the
lead over Janja Garnbret by eight points, while Miho Nonaka is in 3rd, just less than 100 points behind the two leaders. In the Men’s ranking Keita
Watabe currently holds the number one spot, 32 points ahead of Aleksei Rubtsov and 35 points ahead of teammate Tomoa Narasaki.

The next IFSC Bouldering World Cup will be held in Vail, Colorado, U.S.A, on June 9 and 10. 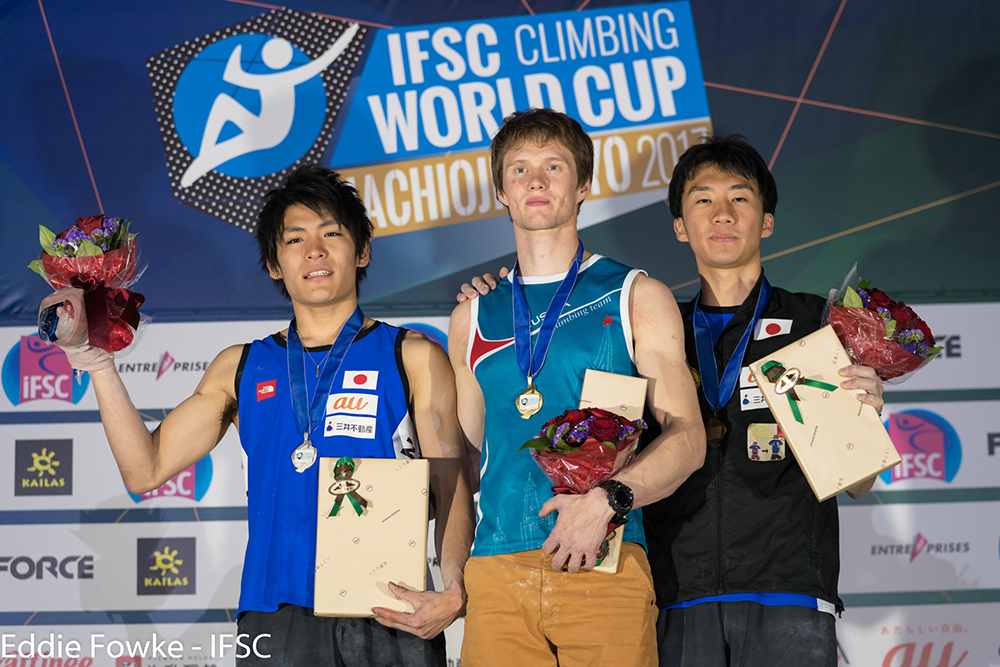 Full results from the World Cup in Hachioji, Tokyo can be found on the IFSC website.