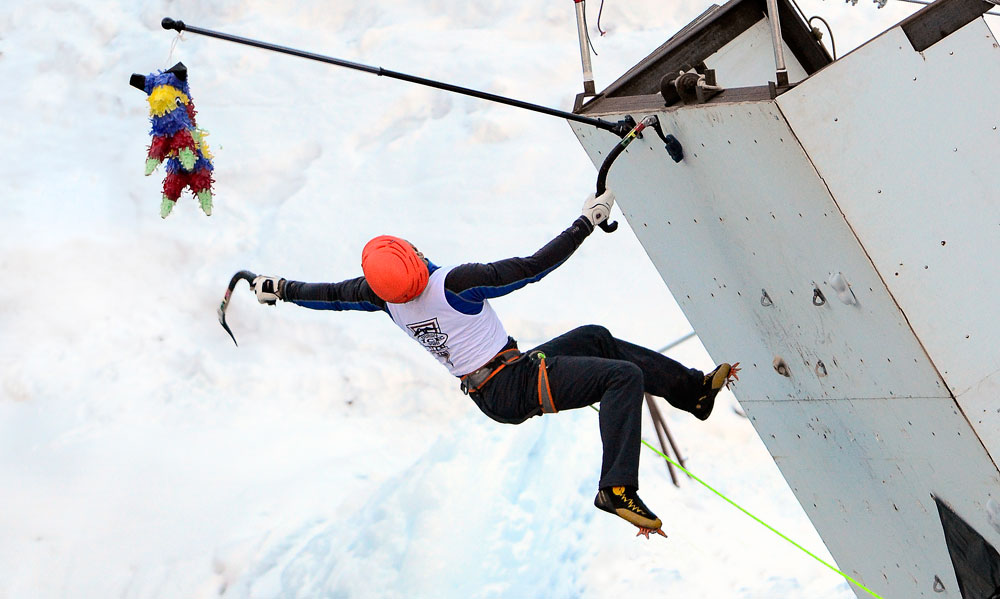 “I said to myself, ‘OK, if you want to climb this route, you must do yaniros,” Mercier told Rock and Ice, referring to the figure-fours and nines he utilized to move through the route’s crux, comprised of three hanging wooden “nuggets.” In France, the “yaniros” as they’re called, are forbidden in mixed-climbing competitions. In fact, Mercier chose to climb last year’s comp route in Ouray without using them, and still sent the route and finished second place.

But this year’s route, set by alpinist Vince Anderson and dubbed the Gold Digger for Ouray’s mining roots and the structure’s three, free-swinging wooden “nuggets” guarding the middle of the 45-degree plywood wall capping the canyon, would require every trick in Mercier’s book. 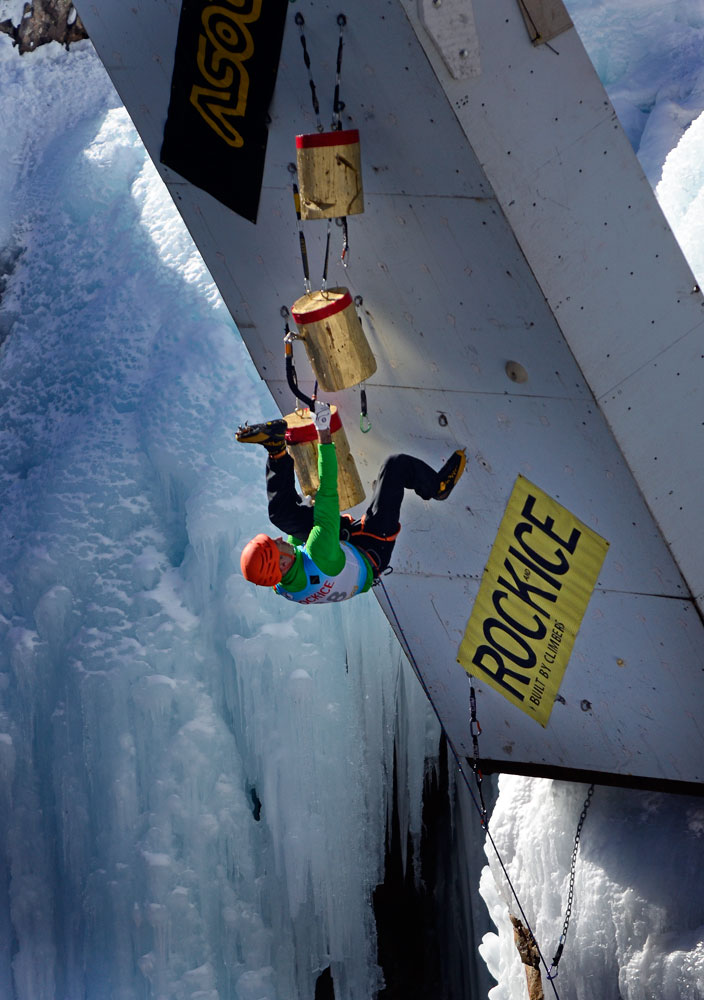 And although the cruxy logs seemed to stymie the Frenchman briefly, Mercier eventually kicked into each nugget with his mono-points and climbed to the top of the wall, leaping and hitting the finishing multi-colored bull piñata—rumored to be filled with “candies and cheeses” according to Colombian competitor Andres Marin—in just enough time to secure a first place finish. This marks Mercier’s second first place finish in Ouray, having won the comp in 2008 at 40-years-old.

Only two other competitors out of 24 total (17 men and 7 women) finished the competition route. The first competitor to tap the piñata (which served as the route’s finishing “hold”) was Italian ice-climbing world cup competitor Mauro Dorigatti. After handily climbing through the route’s crux, Dorigatti had a minute and 15 seconds left in the 12-minute time constraint to reach the top. Dorigatti dynoed and touched the piñata to finish the route in a time of 11:38. 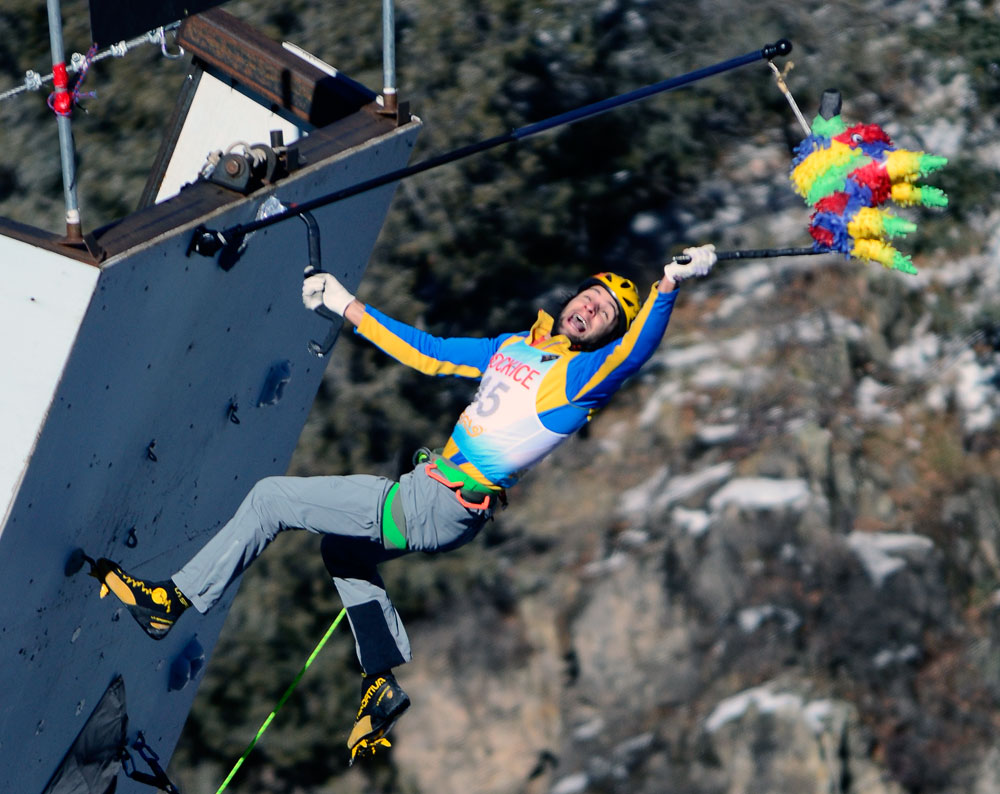 The very next competitor—American Will Mayo—also had a strong showing at this year’s festival, crawling up the finals route with ease. Mayo was the only other competitor to finish the route, hitting the piñata and sending it for a ride into the bottom of the canyon. Mayo’s time was just one second slower than Dorigatti’s, which secured him a third place finish at the end of the day.

“I thought the route was amazing and I couldn’t be more psyched,” said Mayo afterwards. “It’s interesting because I’ve been sport-climbing to train this year, and it seems to be working!” 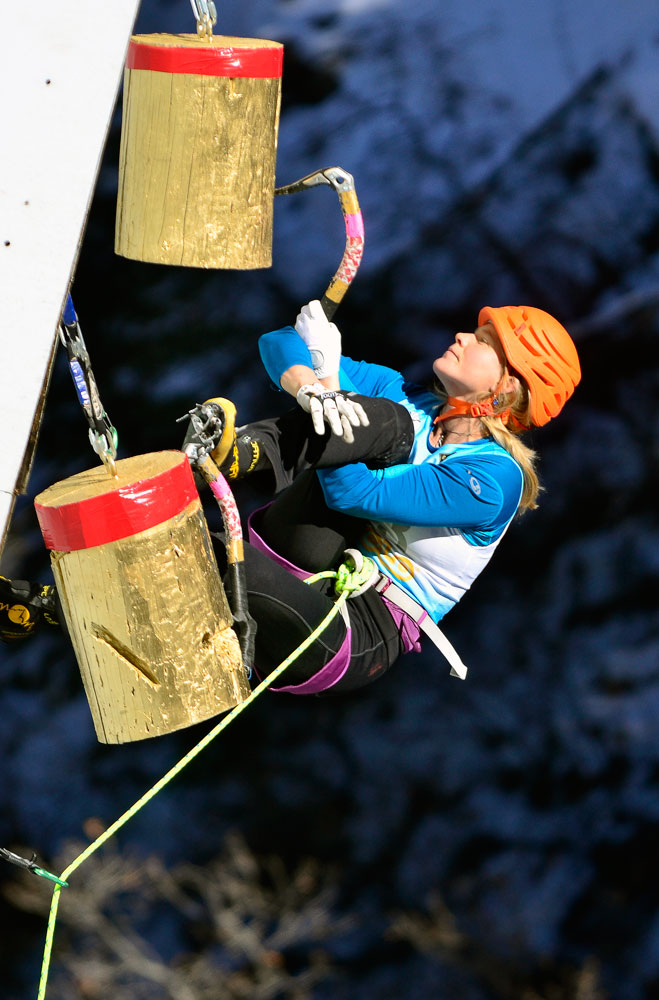 The last competitor in the women’s field also proved to be the best at this year’s competition. Stephanie Maureau of France (the second to last competitor of the day next to Mercier) danced up the route’s beginning mixed section—an established Ouray Ice Park route named Mighty Aphrodite (M8)—and mounted the Gold-Digger wall with plenty of time to finish the route. Maureau swung past the first two hanging nuggets, passing the high-points of the other female competitors, before finally falling while leaving the third hanging piece of wood. 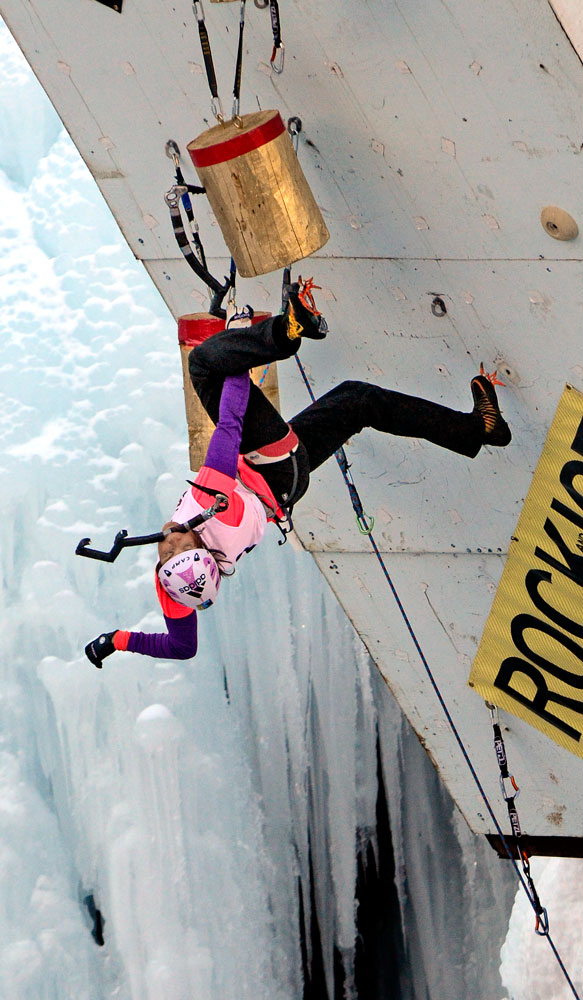 Jen Olson of Canada took second place by reaching and establishing herself on the second hanging nugget with a time of 10:31 before falling.

“I thought the route was super fun and it was easier than I anticipated,” said Olson. “At first I was pissed and thinking, ‘Vince set this route for a six-foot man,’ but once I got up there I was like, ‘Oh, I can do this!”

With blue skies and warmer temperatures compared to last year, all competitors in the 19th Annual Ouray Ice Festival mixed comp were stoked.

“I like Ouray because of the atmosphere,” said winner Mercier after the comp. “There’s no sitting in isolation, and the competition is friendly. Like this morning I climbed in a cave with some friends, and then I got to climb in the competition. It’s great.”

To view an exclusive Rock and Ice photo gallery of the 2014 Ouray Ice Festival, click HERE. 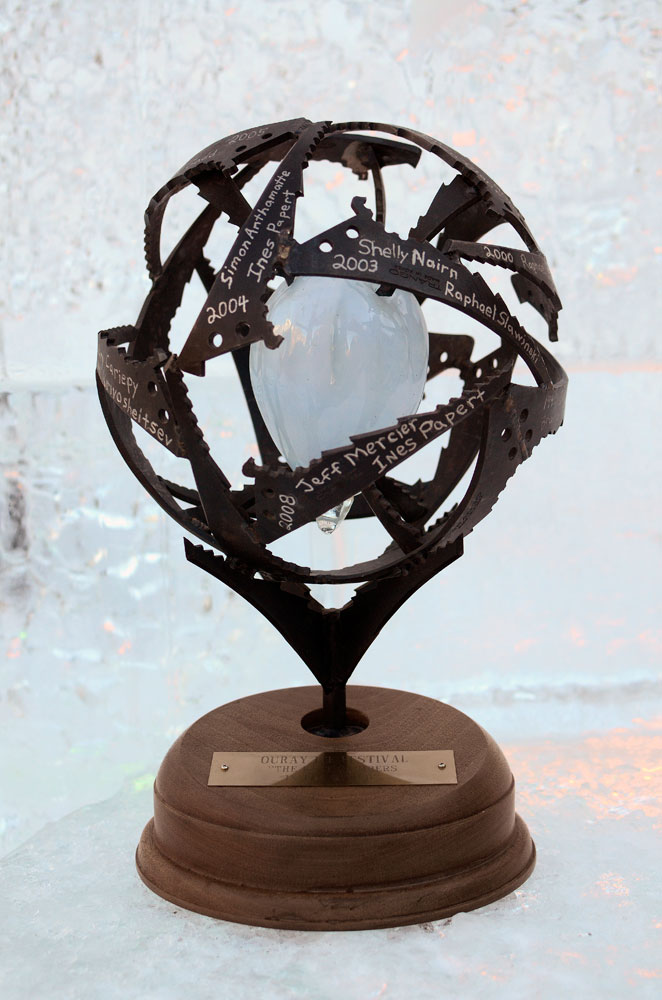 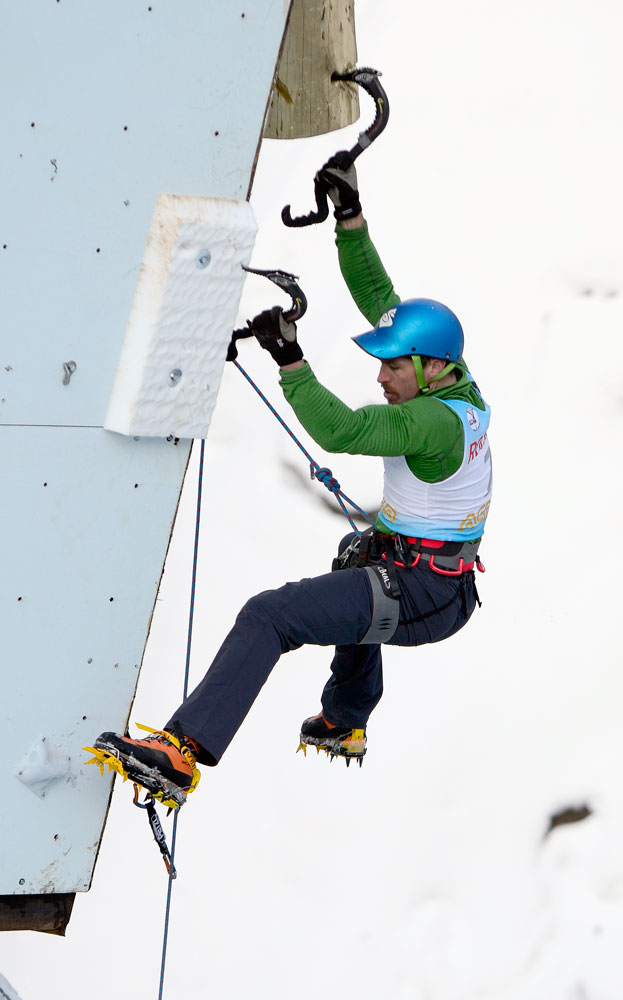 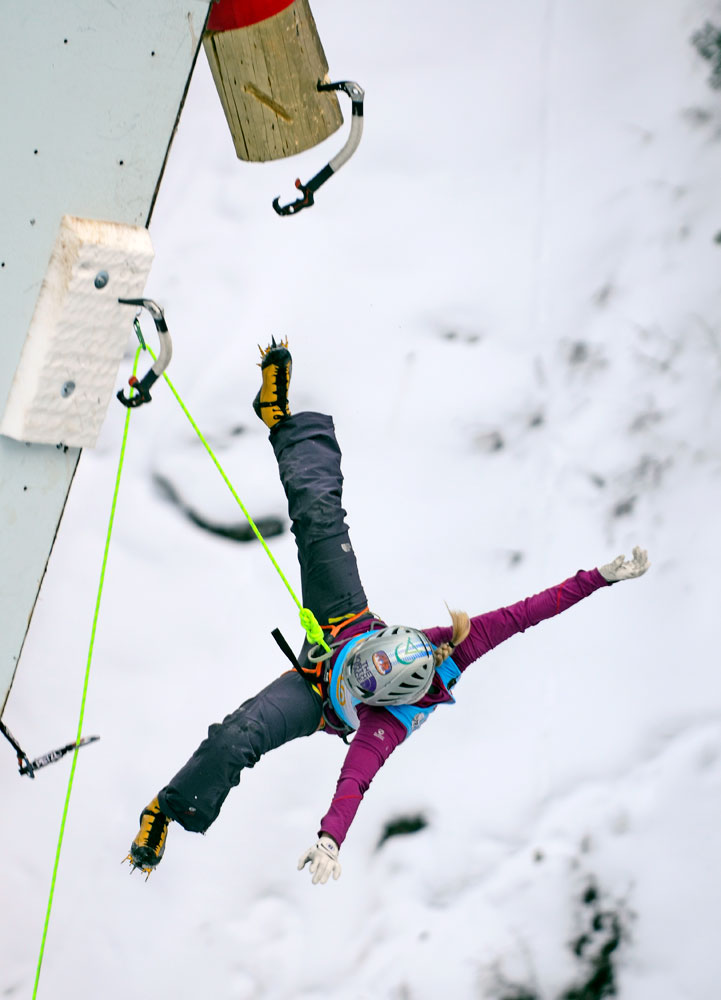 Below are the final results from the 2014 Ouray Ice Festival Mixed Climbing Competition. 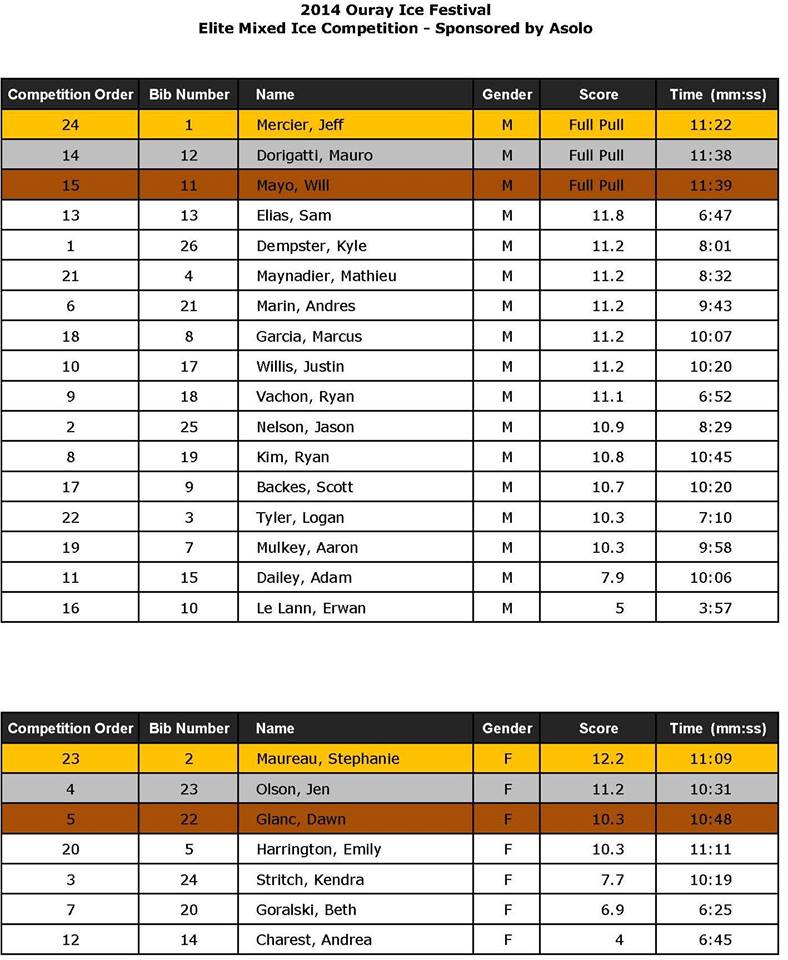