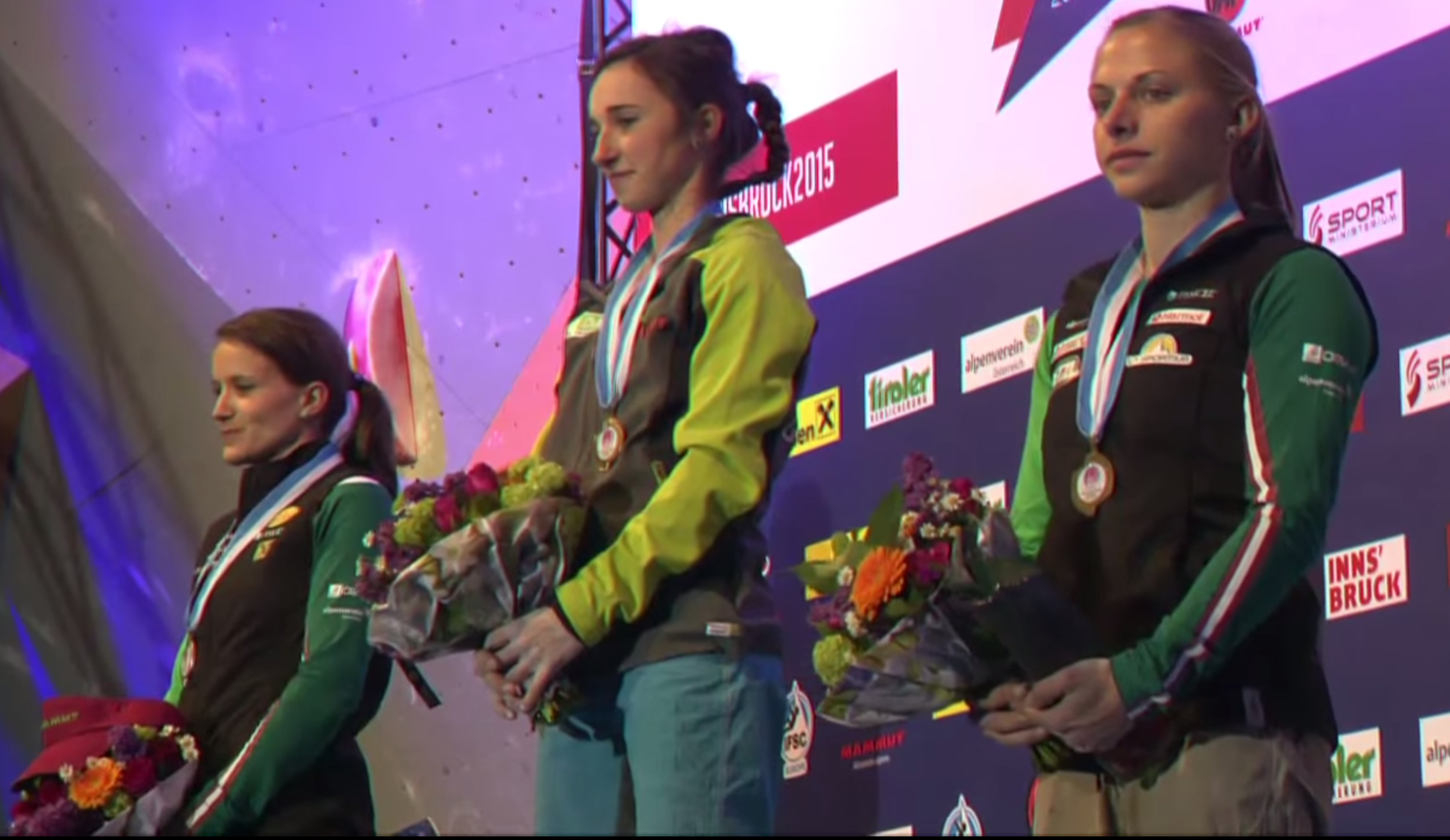 More than 5,000 people packed shoulder to shoulder in downtown Innsbruck, Austria on Saturday to witness Europe’s best duke it out in theInternational Federation of Sport Climbing European Bouldering Championship.

It was close on both sides, but the German powerhouses Jan Hojer and Julianne Wurm took gold for men and women. After a tough qualifying round on Thursday, May 14 with 155 competitors, followed by Semi-Finals on Friday, six men and seven women competed in Finals for the title of European champion.

Wurm and Austrians Anna Stöhr and Katharina Saurwein entered finals at the top of the heap for the women and maintained their placement to the end. Stöhr and Wurm broke from the pack early, each sending the first two problems, while the others struggled with the opening moves.

Six women sent problem three but no one was able to top the fourth and final boulder problem. In total, Wurm took four attempts to top out her three problems—three fewer than Stöhr—making her the European champion.

“Semis and finals just went perfectly,” Wurm wrote Rock and Ice. “It feels great having won this title! In finals I had a tough battle with Anna Stöhr.”

On the men’s side, the podium wasn’t decided until the very last problem, where four climbers entered with a top-out each. Adam Ondra nabbed the only ascent of the first problem, getting it in just two tries. Hojer sent the second problem, floating the cruxy roof dyno to a hidden bucket, in just one go. Austrian Jakob Schubert, who won the semi-final round, joined Hojer at the top in six tries. And Italian Stefan Scarpeli topped the third problem in five tries, joining the race for champion.

Only Hojer and Ondra were able to complete the last boulder problem. Because Hojer was able to top out in only two tries, he sealed the victory before Ondra even attempted the final problem.

“Finals generally fit my style of climbing a lot [better] because the problems tend to be more athletic and dynamic,” Hojer wrote Rock and Ice. “Winning the title at the last boulder was the most satisfying feeling I’ve had in my climbing life.”

After sticking the final problem he ran out to the stands and hugged his and Wurm’s coach, Lukas Biniossek. Ondra later reached the top in four attempts, solidifying his second place position after Schubert couldn’t finish the problem.

The IFSC international bouldering competitions continue May 30 and 31 with the next event World Cup event in Toronto, Canada.