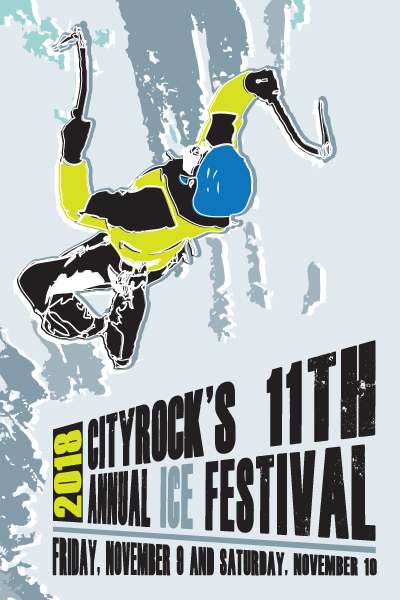 In 2015, I organized the UIAA Youth North American Championships for ice climbing in Durango, CO. As a lifelong ice climber and coach, my dream has been to build and develop a solid youth competitive ice team that had the potential to compete in the Olympics. The North American Championships were a stepping stone, but there are still challenges to overcome. If ice climbing is to be an Olympic sport, it’s important to offer potential Olympians a place to test their skills on Olympic caliber routes. This is one reason why CityROCK’s Ice Fest, which will take place November 9 and 10, at CityROCK Climbing Center, Colorado Springs, is a great event for the sport in America.

Ice Fest traces its story back to 2007, when the owners of CityROCK’s predecessor, the Rock were stumped: What does a roller-rink-turned-hockey-rink in Colorado Springs do as the temperatures begin to plummet in the colder months of the year? Their answer: Create an event that caters to ice climbers, of course! Out of that idea, bulk-purchased dry-tooling holds and ice climbers eager for competition grew Ice Night.

CityROCK went on to offer year-round dry-tooling routes set by the ice climber Grant Wilson, becoming one of the only gyms in the country to cater to cold-weather climbers.

Ice Night itself gained momentum in subsequent years as professional climbers filled the gym to compete for a cash purse. Will Gadd, Will Mayo, Sarah Hueniken, Sam Elias, Katie Bono, Kendra Stritch, Chris Snobeck, are some of the many pros who have competed for the top spot while sliding down “ice” rails on their tools, figure-fouring and figure-nineing across the gym’s suspended features that add creativity to the route setting that wow the crowd .

This year, it’s not Ice Night but a two-day Ice Fest. There will be clinics taught by pro-climbers; a party with Upslope beer and Woodshed Red at CityROCK’s Ute & Yeti; a youth competition; interactive vendor booths with demos; and of course multiple rounds of competition. Access Fund will receive $5 of every $10 spectator ticket, and all the proceeds of a raffle.  “Our sponsors really rally for Ice Fest,” said Ange Tysdal, CityROCK’s marketing and event coordinator. Sponsors include Camp, Mountain Chalet and Pikes Peak Alpine School. Among gear for the raffle are a set of X-Dreams ice tools, twin ropes and crampons.

Watching the growth of Ice Fest, seeing the addition of the youth competition—it is all another step toward achieving that Olympic dream. In the past few years, Kevin Lindau became one of the top athletes for the U.S. in the Ice World Cup; Liam Foster became the youngest American to climb D14+;  Georgia Witchel became the youngest female American to climb D11+; Cat Shirley became the youngest North American speed ice champion at age 15. This new generation of America ice climbers will be ready to take the Olympics by storm with events like CityROCK’s to preparing them. Ice Fest lets my team show their skills to the public, and continues to build buzz around the sport for the Olympics.