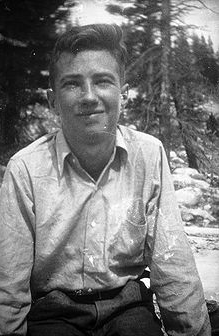 In 1931, a small team made the first ascent of Mt. Whitney’s East Face. On
the highest peak in the lower 48, this extremely exposed route became the first big wall ascent in the Sierra Nevada. The 1000-foot, 5.7 climb was
a turning point in the difficulty of California alpine climbing. At 19, Glen Dawson had made his mark on mountaineering history.

Dawson, a fabled Sierra-Nevada mountaineer and environmentalist, died on March 22 at 103.

Dawson was raised in a nature-oriented family – his father was the Sierra Club president during the mid-1930s – and began climbing early. After ascending
the Matterhorn at 16 in 1928, Dawson returned to his native California and began a spree of rapid ascents in the Sierra Nevada.

Dawson is legendary for his numerous ascents of peaks in the Sierra Nevada Range, primarily throughout the 1930s. After pioneering new routes in the Minarets
and Palisades, Dawson at 19 made the first ascent of Mt. Whitney’s East Face in 1931 – a climb considered a turning point in the difficulty of California
alpine climbing. Dawson continued to notch notable climbs in the Western United States, including of El Piacho del Diablo in Baja, California, and
Castle Dome in Yuma, Arizona, before traveling abroad and ticking off peaks in the Alps, Wales, USSR, and Japan. Dawson interspersed his climbing with
several notable first ski ascents in California, including Telegraph Peak in the Transverse Range, and Mammoth Mountain in the Sierra Nevada.

Beyond mountaineering, Dawson served as the president of the Sierra Club (1937-1951) and was a climbing and skiing instructor for Alpha Company of the
Army’s Tenth Mountain Division (1944-1947). He was also a prominent antiquarian bookseller in Los Angeles. He and his brother took over the bookshop
established by their father in 1905. Though the store closed in 2010, his son Michael continues to sell books online.

“Before 1931, climbing in the High Sierra was done without ropes,” Dawson wrote in the forward of Climbing Mt. Whitney. “During my lifetime I
have been an antiquarian bookseller and publisher but that one event of August 16, 1931 is my footnote in climbing history.”

“I was just interested in going up,” Dawson told the Los Angeles Times in 2005. “Sometimes you really can’t tell whether a face can be climbed until you
go run your nose in it.”

At the time of his death, he was the longest active member in the Sierra Club.