There was a mix of old and new at the speed and bouldering World Cups last weekend in Tai’an, the second China-based World Cup of the 2018 circuit, with podium vetrans and first-timers alike taking home medals.

In the men’s event Alex Khazanov made history by winning the first World Cup gold for Israel. After all finalists topped M1 and M3 and failed to top M2, Khazanov was the only competitor to complete M4 earning him the gold medal in what was his first ever World Cup final.

“Keep dreaming, and the dreams will come true. Speechless,” wrote the 23-year-old on his Instagram.

Jernej Kruder of Slovenia flashed two of the final’s problems to claim silver, making his third podium appearance of the 2018 season and maintaining his lead in the season bouldering rankings. His teammate, Gregor Vezonik took bronze by count-back to the semi-finals after both he and Rei Sugimoto of Japan topped two problems in finals. 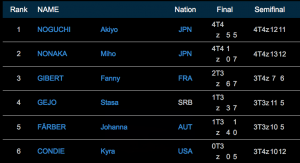 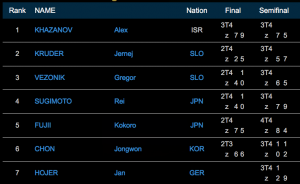 France and Indonesia were the big players in the speed competition, claiming five of the six podium spots. In the men’s speed event Bassa Mawen of France claimed his first ever gold after narrowly beating Sabri Sabri of Indonesia by 0.07 seconds in the big final. Both performed flawlessly thoughout the competition, with neither competitor clocking over six seconds throughout. Sabri made his first podium and took silver. Dmitrii Timofeev of Russia, who is currently ranked number three in the world and who took gold last weekend in Chongqing, claimed bronze after a false start by Aspar Jaelolo of Indonesia in the small final.

France also took gold in the women’s event, as the 2017 season winner and current world ranked number one Anouck Jaubert once again took the gold medal after beating Sari Agustina of Indonesia in the big final by 0.12 seconds. Agustina took silver, her first World Cup medal and her teammate Aries Susanti Rahayu took bronze after beating Anna Brozek of Poland in the small final.

Noguchi and Fujii Win Gold, McColl Returns to Form with Silver in Chongqing