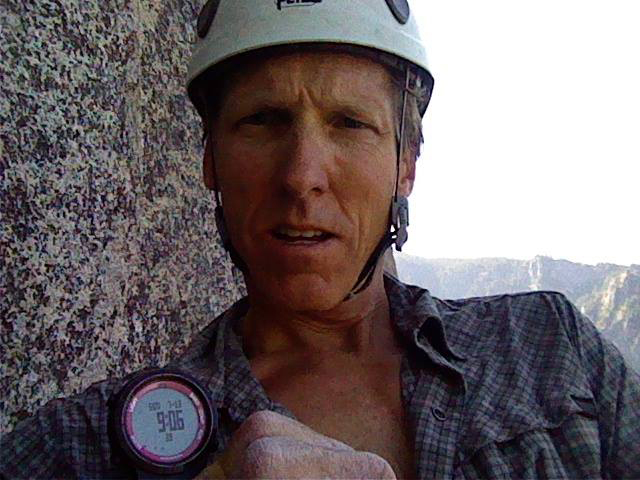 On July 13, as Yosemite Valley awoke to a high temperature prediction of 106 degrees, speed-master Hans Florine set out to make the first one-day, solo ascent of the Triple Direct on El Capitan.

Florine, who just turned 50 years old last month, had a week-long vacation from his full-time job as manager of the Touchstone Diablo Rock Gym in the San Francisco Bay Area, while both of his kids were away at summer camp at Yo! Basecamp Rock Climbing Camp. When asked what he would do with his free time, Hans said, “I’m gonna climb my brains out this week.”

After a couple of days of moderate multi-pitch link-ups in Tuolumne Meadows with a friend, Florine was bursting with motivation. On Sunday, July 13, he set out at 5:48 a.m. on the Freeblast start with a 70-meter rope, a rack, and a gallon of water. He rope-soloed each pitch with a Gri-gri as his belay, and proceeded to rappel and jumar every pitch except for the 5.6 easy terrain from the Half Dollar to Mammoth Terraces.

When questioned about the heat, Florine didn’t seem to acknowledge the harsh conditions, saying, “It was only hot when the sun hit me, but I tried to hide in tiny little corners of shade.”

Florine topped out at 11:17 p.m., setting an incredible new speed-solo record of 17 hours and 29 minutes on the Triple Direct, which combines the start to the Salathe wall, the center portion of the Muir and the last third of the Nose from the Great Roof up. This was undeniably one of the raddest days of climbing any 50-year-old has ever busted out in the Valley. In addition to being the current speed record holder for the Nose with Alex Honnold, Florine also holds the record for most trips up El Cap, now at 157.