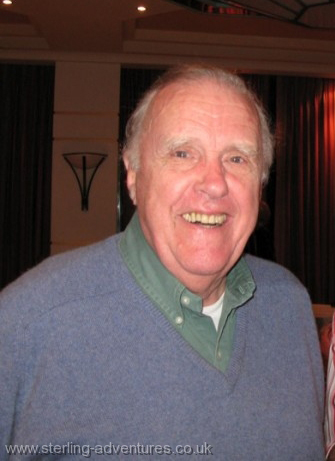 Who else could joke about death the way he did?

In one of the nine, yes, nine, entertaining and hilarious social commentaries by Ian McNaught-Davis printed in that uber-classic 1978 compendium Games Climbers Play, he wrote about death’s rituals, the first being the person’s removal from the climbing-club lists of active members, to be transferred to the Dead Members Section, “presumably forever.”

The British climber McNaught-Davis then immediately produced tales of graveside humor and drama, such as that of a vicar who couldn’t find a grave, searching for it in the pouring rain followed by “a retinue of mourners and bearers,” and finally approaching the site from the wrong side over a pile of rubble: “The bearers slipped, and for an incredible moment it looked as though the coffin was going to be hurled to the ground and its grizzly contents thrown without ceremony into the muddy hole. Only a swift and skillful bridging move saved the day.”

McNaught-Davis, who died February 10 at the age of 84, was best known as an IT expert and presenter of the BBC series “The Computer Programme” and “Micro Live.” But he is part of international climbing history, member of the famed 1956 first ascent of Muztagh Tower in the Karakoram with his cohorts Tom Patey, Joe Brown and John Hartog. He appeared as a climber and wit on the televised ascent of the Old Man of Hoy, a Scottish sea stack, in 1967; and in 1964 he climbed the Eiffel tower on television. He was a great contributor to our sport and community: president of the UIAA (international climbers’ governance group) from 1995 until 2004, and British Mountaineering Council president from 1991 to 1994. He visited this country on UIAA business as well as to climb, and was a much-sought-out companion.

“Ebullient, forceful and charismatic,” as Ed Douglas wrote in the Guardian, “he had an enthusiasm for life in general and mountains in particular that was impossible to contain. ‘Mac,’ as he was known, born in Wakefield, became a kind of international Yorkshireman, urbane but plain speaking, down-to-earth but with an appreciation of life’s pleasures. He seemed able to fit in anywhere, while remaining wholly himself.”

McNaught-Davis was in huge demand as an “after-dinner speaker,” and naturally wrote a mock treatise on how to select venues, advising: Refuse all invitations that do not come from a climbing area. Avoid all single-sex clubs (“unless you expect to speak, with utter tedium, for at least an hour—they deserve it”). Refuse all university dinners “unless you are capable of consuming huge quantities of alcohol, and are prepared to participate in some bizarre activities.”

In a pretend interview of Joe Brown on the 1971 British ascent of the towering tepui Roraima, Guyana, McNaught-Davis dubbed his lifelong friend “Joe Beige” and quoted him as saying, “It took us a whole week to get over one overhang … All the time we were being attacked by the evil vampire bats” and climbing up a waterfall “full of snapping man-eating piranha.” A character depicting the generally beery Don Whillans, “jumar[ed] up the rope hanging from Joe Beige’s waist” and declined to go further with a muttered, “Aye, well, I’m having a bit of trouble with my special outsize harness,” while the Scottish ice-climbing and rescue hero MacInnes appeared as “a perspiring Hamish McPiton, hung about with cine-cameras, bagpipes, haggis and deer-stalker hat, and trying to look as if he should be somewhere else.”

“Mac” was an imaginative observer of crags and scenes from home to Snell’s Field, Chamonix, to Yosemite; joked about crowded crags, women climbers and safety (“Safety Last”); hung with Royal Robbins and called Jim Donini “Jim Domino”; and depicted a Yosemite climber as saying, “I got a thrill doing a second ascent of a [Jim] Bridwell route, when I found a perfect imprint of his hand… I placed my hand over it” as a crowd of solemn watchers “drew on their curiously aromatic cigarettes.”

McNaught-Davis rock climbed into his 80s.

He is survived by his wife, Loreto, a stepdaughter, and his two sons.