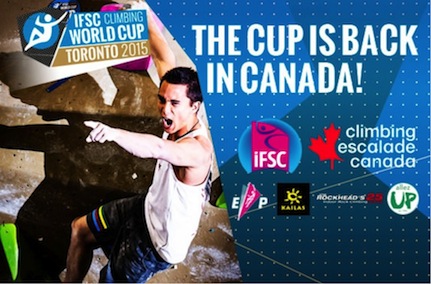 Last year in Toronto,Guillaume Glairon Mondet of France surprised the audience with a complete turnaround from punting the first two men’s final problems to taking the gold.The IFSC World Cup will be returning to Toronto, Canada, this weekend, May 30 and 31, for another exciting showdown.

“The problems are harder every year, and it’s becoming more demanding to make it to the podium,” IFSC officials say.

Other female climbers to watch are Austrian climber Anna Stöhr, who has won 21 World Cup gold medals, and American Alex Puccio, the US National bouldering champion for the past nine years.

“So excited to be on my way to Canada for the first Bouldering World Cup of the season,” Puccio wrote on Facebook. “I have worked so hard and now it’s time!”

In the men’s field, Canadian climber Sean McColl, who took bronze in 2014, will be defending his home turf against Hojer, who placed second last year, and Jakob Schubert, winner of seven consecutive World Cup victories in lead climbing.

McColl wrote on Facebook, “I hear all the World Cup competitors are coming to MY COUNTRY for a competition.”

Mondet has not said if he will be returning to defend his title, but Adam Ondra is rumored to be competing.

The IFSC will post updates on Twitter throughout Saturday’s qualifiers and Sunday’s events. Use #IFSCwc to join the chat.

Check back on Rockandice.com this Sunday, May 31, for live streaming of the events.

The next IFSC World Cup competition will be held on June 5 and 6 in Vail, Colorado. Visit the IFSC website for more information and a complete calendar of IFSC World Cup events.