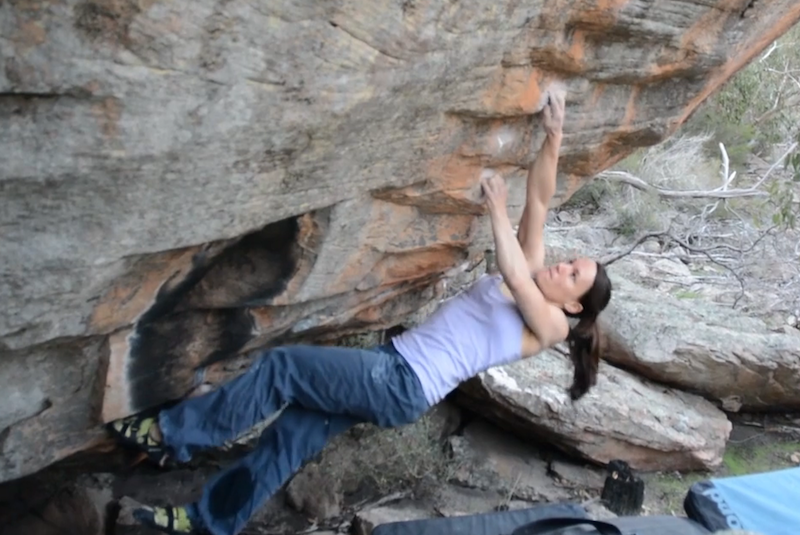 Dorothea Karalus of Germany made what might be the hardest female first ascent of a boulder problem earlier this month when she successfully climbed In the Cloud (V12) in the Grampians, Australia.

According to her blog, Karalus first saw the undone problem eight years ago on a trip to the Grampians but was unable to finish it. Despite the boulder’s proximity to other more established bouldering areas in the Grampians, the problem went undiscovered until Karalus returned this year to make the first ascent.

“The boulder has two perfect and very obvious starting holds and follows a beautiful line of very small horizontal crimps with a sequence revolving around a tiny crimp and a gaston flake in the end,” wrote Karalus. “It is rare that you find such a pure crimp boulder that is not awkward and sharp!”

Karalus originally estimated the problem at 8A (V11), but soon upgraded it to V12 when she realized she had spent much more time sussing out In the Cloud than any of her previous V11s.

“With the exception of the first move all the 5-6 moves are hard and uncompromisingly powerful: I tried various drop-knee variants, but the footholds are just too sparse and bad for that. It took us several days to figure out a method,” she wrote. “Even after having done all moves isolated, I was rather unhopeful about linking them.”

The weather was not on her side, either, wrote Karalus in her report. Cloudy days often brought rain, and because the problem is north-facing, Karalus found she could not stick the moves on hot, sunny days (since the problem is in the southern hemisphere, its north face receives more sunlight). In the end, she remedied these issues by opting to climb the problem at night by headlamp.

Many women, including Karalus, have climbed harder than V12, and Japanese boulderer Tomoko Ogawa cranked V14 when she sent Catharsis in Shiobara, Japan. Still, only a handful of V12s have been established by women, one example being Alex Puccio’s Polly Pocket Sit (V12) in Val Bavona, Switzerland. This puts Karalus’ ascent of In the Cloud in the running for one of the hardest female-established boulder problems ever if the grade is confirmed.

Check out the video below of Karalus making the first ascent of In the Cloud.

In the Cloud, Grampians // Australia from Dorothea Karalus on Vimeo.