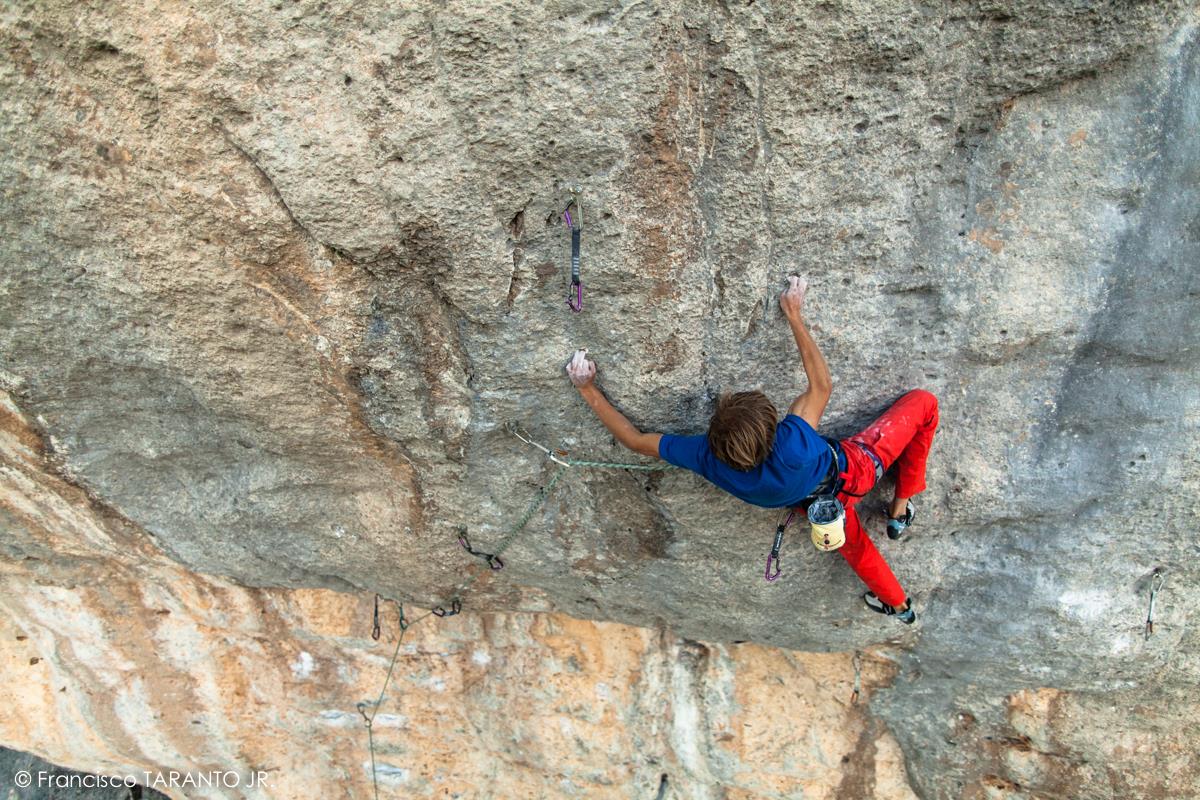 Rock and Ice caught up with Megos to hear more about his new route, his plans for the future and more.

Why did Et dieu créa la Flemme catch your attention?

Simple answer. Because it was still a project, so unclimbed, and it seemed possible.

How many tries did you need to establish this route?

It took me two days. I checked it out on the first day, after two tries on another project (and breaking a hold on that project). Then I did four tries still on that day, but couldn’t do it. So, I returned the next day and did it on the first try of that day. So, in total, five tries.

You can’t compare it to such routes as Biographie, but it’s definitely a nice route worth climbing. [The route has] small and not that good pockets in a steep part of the wall. The crux is a cross move from a crimp into a two finger pocket.

What were your thoughts when you snapped off the crux hold of the other project you were working on?

Actually, I just thought one thing: Fuck. It’s not possible anymore now. After snapping the hold, I of course tried to find another way to do the crux, but just couldn’t find anything to get past that sequence. I think it would have been around 9a+ [5.15a].

Are you beginning to focus more on first ascents?

Well, I think it’s becoming more and more important now. Some years ago I was hardly doing any first ascents, but that has changed.

I think it’s sometimes the fact that I have climbed everything else but the projects, that’s why I am trying them. But it’s also because I am interested to see how hard I can climb and how I can deal with the fact that the route has never been climbed before and there is no beta, or it might even be not possible.

You’ve climbed La Rambla, Action Directe and Biographie all in a matter of hours. How are you able to make such quick work of these incredibly hard routes?

That’s a hard question, isn’t it? How is Usain Bolt able to run that fast? Can these questions be answered?

I think it’s just a mixture of many different things such as training, physiology, a bit of luck from time to time, talent and will.

Have you done any bolting?

I have done a little bolting, but not that much. I bolted one 7c [5.12d] at Kalymnos, Greece, and placed a few bolts in Frankenjura, Germany. I think I will definitely bolt some more in the future!

Adam Ondra has developed an extremely fast style of climbing. How would you describe your climbing style?

I would say not too fast and more controlled than dynamic. Doing a dyno is always the very last opportunity I would choose.

Where are you climbing next?

Well, I am sitting at the airport in Dubai on my way to the Rocklands, South Africa, while answering these questions.

Where do you see yourself in 10 years?

Climbing, that’s for sure. About the rest I don’t know … Hopefully it’s cool and fun.