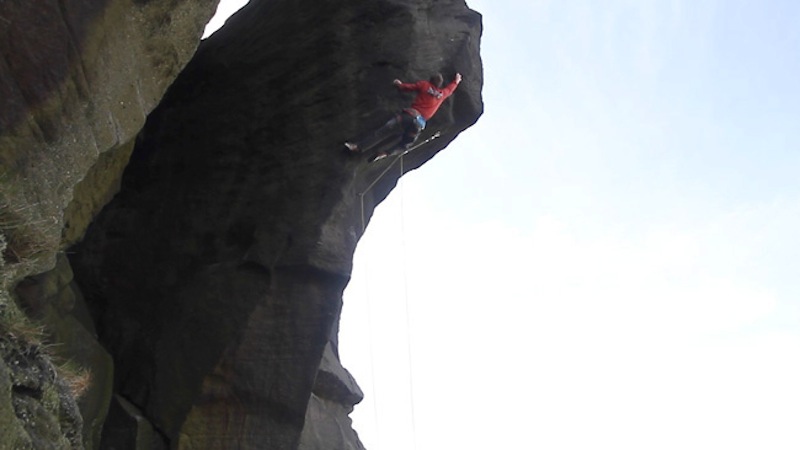 In the interview below, Richie Patterson of Wild Country talks to Pete Whittaker about his ascent of Baron Greenback (E9/E10 7a or 5.13d R).

Pete, can you describe the Baron in terms of its difficulty and what you needed to bring to the route?

Pete: I’m not very good at sport climbing, but in sport climbing grades it must be around the solid 8b (5.13d) mark. You have to be good, witty and strong with your heels, that is the most important thing.

Tom, you’ve seen Pete try hard, in fact we’ve all seen Pete try very, very hard on Century Crack (5.14b) – how hard did he try on this?

Tom: Well, he didn’t cry at the top of this one. That probably means he either took tissues up in his pocket or Century was more taxing for him. Pete will have to tell you!

Pete how hard were you trying?

Pete: Offwidthing is very different to this sort of climbing, you can always squeeze an extra ounce out when climbing offwidths, which is why when climbing them you reach absolute limit on ‘try hard factor’. Other routes you might try hard on, for example Baron Greenback, but it’s different; you fall off pumped and always think you could have tried harder (even though you probably couldn’t have). Falling off an offwidth you don’t think that. You’ve usually passed out. So in terms of how hard did I try on the route? Pretty bloody hard, but in reality probably not that hard.

Tom, you belayed Pete, how are you belaying on hard / very dangerous routes?

Tom: I think I actually find belaying on the hard or scary routes quite dependent on how confident the leader is and how dangerous the route is. I once thought my leader was falling off a bold E5 on grit and I ran backwards through the woods trying to stop a ground fall…. apparently he’d not actually fallen off though, so he started screaming at me!
And was it any different on this route and this day? And what did you think about the bolts?
Tom: I was pretty calm belaying Pete actually. I trusted those bolts quite a lot (having chopped a couple of this type in my time) so I wasn’t stressed. Perhaps that’s the way it’ll be though, as it wasn’t actually me risking my neck! I’d probably feel different if the other way round.
Pete, how do you rate the bolts after you found out more about them?
Pete: I don’t know how I rate them, because I can’t see what they are like inside!! One day they will fall out though: so I hope nobody gets hurts, be careful.
The day ended well as we see but there was one point where you’d fallen off, and then Tom fell off – did it feel it might all go wrong at that point?
Pete: It always felt in the balance (that I’d get it done), but nothing seemed dangerous. When you have doubt that’s when things go wrong.
Reading Tom’s blog after your big day where Tom sent his E9, Nathan sent his E8 and then you dispatched your route, there seemed to be a real buzz about his writing, is that how it felt on the day?
Pete: There was a buzz on the day, everybody was climbing well, having a laugh, psyched and not taking things too seriously. I like to have these feelings everytime I go climbing though, the day was nothing special in terms of vibe at the crag, that’s normal, that’s why I like going climbing.
Was that the same for you Tom , how was the vibe that day?
Tom: The atmosphere was amazing that day. Everyone wanted to do their projects and everyone was supportive of the other people. It was actually pretty good fun considering how serious it might have actually been. As we did each route, one after the other, there was no awkwardness about one person having fallen off on their first attempt. To be fair, it was actually Pete that had the most pressure on him.

Pete, this has been a big year for you, and after having to switch focus to Cobra Crack (5.14) how was it watching yourself on the Baron five months later?
Pete: I was training for Cobra before I even tried Baron Greenback. The training crossed over well as I was working on things that I wasn’t very good at and this paid off on BG. As for watching I do grunt to much, I need to tone down, can’t help it though, it just comes out.
You’ve had a pretty amazing couple of years, with Century Crack E10 / 8c (5.14b), Baron Greenback E9/10 / 8b (5.13d) and Cobra Crack E9 / 8c (5.14b) amongst the highlights, how does the Baron rate for you sandwiched between these others?
Pete: Century is definitely the biggest achievement by far, I put the most effort, dedication and training into that. It was way more then just trying hard on wooden cracks in Tom’s cellar, I don’t think people realize that. Cobra was a cool route but it was just a repeat, I’m well pleased to do such a classic though. BG was the hardest thing I’ve done on grit and an accumulation of everything I’ve learnt climbing on gritstone, along with a bit of consistant training on some weaknesses. I’m very very pleased to have done this route. First ascents are always more special to me then repeats.
How do you guys think it ranks amongst grit’s other hardest: Equilibrium (E10, 5.14a), Dr Doolittle (E10, 5.14a), Dynamics of Change (E9, 5.14a), The Groove (E10, 5.14b), Gerty Berwick (E9, 5.14a), Widdop Wall (5.14c) ?
Pete: Proud line
Tom: I think it’s up there with all of them. It’s a very special route indeed, if you’re talking about cool, asthetic, big and hard lines on grit.
Pete, you got an urge for any of those?
Pete: Well I’m not doing Dynamics again, that seems a bit silly. Currently, nope to the rest
One of the first people to watch this commented that it had a hard grit feel, was that film a big influence on you?
Pete: I love Hard Grit, it is my favourite film. Grimer always says everyone skips past him in the history section, that’s my favourite bit though, love listening about the exquisite lines. The actual climbing wasn’t that influential on my climbing though, just inspiring and helps you get psyched. When I saw the film for the first time I never thought I’d do any of these kind of routes
You were dubbed the ‘grit kid’ – who’s coming through to fill your shoes?
Pete: That was when I was 16, I can’t think of anybody that age coming though. However Nathan Lee, Oli Grounsell and that crew are well keen, they are a few years younger then me. I’ve only seen Nathan headpoint a few times, but he’s really good at it, one of the best at the moment in terms of strength to length of ticklist. His new route at Wimberry looks hardcore. He’ll grow out of hardcore and want to clip rusty bolts like me soon though 😉
Where does this day rank for you two in what’s becoming a growing list of big ‘Pete and Tom’ days?
Pete: Just another Wednesday really. It was a great day in terms of climbing achievement I guess, as I climbed my hardest route I’ve climbed on Grit, but I can think of loads of other days that have been just as cool where maybe we haven’t even climbed anything.
Tom: Well, I might have to disappoint here. It actually doesn’t rank that highly! It was a very cool day out and we all had a great time. I think in particular mine and Nathan’s routes aren’t actually that hard. Both of them could come down a grade, but people on the outside don’t quite perceive it that way. Pete’s ascent was truly outstanding and I think we piggybacked on his day. Some of the days that Pete and I have had on our challenges were way bigger for us, also the big days in the US on the offwidth tour, the Millstone epic day with Nige Kershaw, the Churnet deckout day. I think those stick in my mind more. When Pete does the direct on BG, I do Nathan’s new E9 and Nathan does Madman…. well, that might be quite cool 🙂
Check out the video of Whittaker’s ascent below.