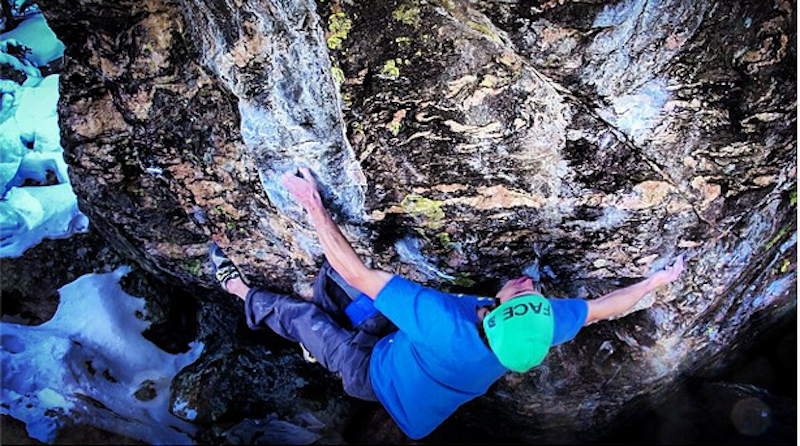 Temperatures may be dropping and the snow may be accumulating in the Rocky Mountains, but that hasn’t stopped Daniel Woods, who last weekend made the first sit-start ascent of The Ice Knife (V15) in Guanella Pass, Colorado. The Ice Knife saw its first ascent by Dave Graham in 2011, and Woods and Paul Robinson made the second and third ascents, respectively, last spring. The sit-start, which Woods sussed last spring and finally sent last weekend, is considerably harder than the original problem and Woods’ hardest boulder send yet. Rock and Ice got the chance to catch up with Woods via e-mail about the recent ascent.
R&I: Dave Graham described The Ice Knife as “a very technical compression line and extra conditiony.” What does the sit-start add to that description?
DW: Dave is right about the stand’s description. The sit-start adds in four moves of V12 that are of similar style to the stand. The sit start begins with a left hand pinch and right hand edge. From here, you plug in a right knee scum and do a huge left arm lock off to this awkward, wrist-wrenching half pad undercling for the right hand. It is really hard to get this hold right to do the next moves. Once you have this, you take the knee scum out and come left hand into a sloping undercling pinch, reset your feet (left foot goes onto a fingernail sized edge and right onto a smear), bump left hand again to this 2 finger sloping dimple, then do a huge move with the left hand to a half pad flat quartzite edge. The crux revolves around taking this sharp undercling from above your head and pulling it down into your waist … Very powerful. It was tricky to find the right conditions that made these holds possible to stick, too.

R&I: You say on your Instagram that you “battled” for 13 days with this problem. What was the toughest part?

DW: The toughest part was convincing myself that I could do it. If the air temperature and humidity levels were off, this would affect my mental game which affected how I performed. It was either too hot or too cold/ too much humidity or not enough. Most of the holds are friction dependent, so conditions were a deal breaker. I also fell off of every move including the last one to the lip of the boulder. I never felt “comfortable” in any of the positions. Every attempt was a gamble and I had to just give it my all. For most of my ascents, I can pin point when I am going to send. This one was not the case. I just convinced myself that one day would be the “lucky” day and I would never have to go back again.
R&I: Is this the hardest problem you’ve done? Possible V16?
DW: This boulder took so much mental and physical energy out of me. I dealt with multiple bruises and splits, sore shoulders, tired fingers, and fatigue. The approach to the boulder is a strenuous 20 min jaunt uphill through trees and talus. The elevation is at 10,000 feet, making it hard to breathe. I sent The Ice Knife within two days back in May, then immediately started to try the full line. I fell on the last hard move before June arrived, then it got too hot. I returned back in Sept. and had to relearn the sequences again. I continued to fall all over the boulder while being in good shape. The week before I sent, I fell off of the last move due to a foot slip. The next week had 3 days of snow in the forecast, predicting 5 inches to fall. After this storm, there was a two day window of sun before the next snow storm hit. I used those snow days to train and brutalize myself.
The day I sent conditions were 42F, 20 mph wind, and snow on the ground to give that additional humidity. It was the best this problem had ever felt. I felt exhausted after topping out. Usually, when you have something so wired after many days of efforts, it feels easy. This one was not the case. I knew every position so well and it still felt hard. There are still some boulders I would like to repeat before dropping the 8C+ (V16) grade such as Lucid Dreaming (V15), Gioia (V16), and Livin’ Large (V15). All I can say is The Ice Knife sit-start is my hardest boulder problem within my style of climbing. I have done 18 8C (V15) graded boulders (give or take) and this one takes the prize.

R&I: Looks pretty cold out there! How are you keeping warm and motivated when the temps drop?

DW: Luckily, TNF makes perfect winter wear to survive in less than ideal conditions haha. I have the new 900-fill Thermoball down jacket that saved my life in the freezing conditions. I also have a Blackcat space heater that kept my fingers warm.

In CO, I had a huge support crew including my wife and all of my friends. Though all of them were not with me every single day, they all had my back with helping me get this rig done. Huge thanks to Courtney Sanders, Sean Morgan, Beau Kahler, Cameron Maier, Jimmy Webb, Dave Graham, Matty Hong, Chad Greedy, Paul Robinson, Isabelle Faus,Luke Parady, Ander Rockstad, and Nick Milburn for supporting me through this journey! Thanks to The North Face, Sanuk, La Sportiva, Petzl, Organic Bouldering Mats, and Goal Zero.

R&I: What’s up next for you? Any special winter plans?
DW: Up next is a sick project that my friend Max Krimmer showed me in the South Platte. It is a 25 foot tall, 58-degree overhanging roof with dynamic moves between campus rung style holds. It is tall, hard, and perfect. After, I will be going to Red Rocks in Dec. with Courtney and Jimmy for a couple of weeks, then off to Penoles after that.

Check out the video of Woods and Robinson sending The Ice Knife.