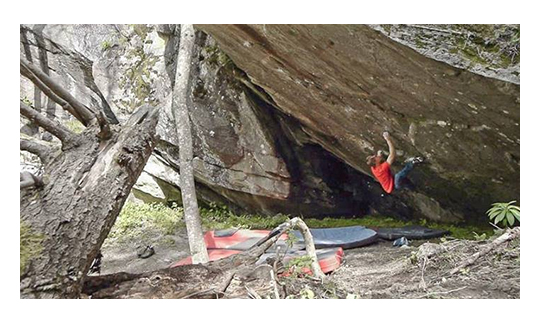 Hukkataival&#39;s Facebook” />Nalle Hukkataival of Finland has completed a longstanding, open project by climbing Bügeleisen from the sit-start.

“This line has been a well known project for at least 13 years,” posted Hukkataival on Facebook. “I’ve tried it over a couple years, every time challenged by the weather. It turned out to be the biggest battle I’ve ever had with a climb, both mentally and physically.”

Hukkataival had made the third ascent of the problem’s stand-start – a V14 established in 2001 by the legendary Austrian boulderer Klem Loskot – in April 2013, remarking that the problem was “certainly one of the BEST hard boulders in the world.”

However, the sit-start to Bügeleisen proved too enticing, and Hukkataival kept returning to what Loskot once described as the “6-meter Monster,” and now he has opened what he says may just be the hardest boulder problem he’s ever climbed.

“Bügeleisen sit-start could be the hardest thing I’ve climbed and more importantly it is one of the best boulders in the world!” posted Hukkataival.

This February, the 28-year-old Hukkataival claimed the third ascent of Gioia – a problem considered by Adam Ondra to warrant the coveted V16 grade. But Hukkataival was apprehensive about confirming the problem’s grade, writing on his blog: “Gioia is definitely one of the most difficult boulders in the world. It’s certainly harder than most 8C’s [V15s] out there. The real question is, is it a full grade harder? If we decide to consider it 8C+ [V16], then there are also a couple other contenders for 8C+ in my opinion.”

Considering Hukkataival’s tick-list – which includes a confirmed V15 first ascent of The Understanding in Magic Wood, Switzerland – the sit-start to Bügeleisen is a contender for the world’s hardest boulder problem.

Chris Schulte – an American V15 boulderer and author of Klem Loskot’s profile – contacted Hukkataival to get the low-down on sending the Bügeleisen sit-start.

Schulte: When did you first see Bügeleisen?

Schulte: How did you first hear about it? Was it through the Loskot legend?

Hukkataival: I’ve watched the video of Klem climbing the stand-start so many times! Bügeleisen was for a long time rumored to be possibly the hardest boulder in the world and the full line from the sit-start was a notorious project.

Schulte: What do you know about Loskot?

Hukkataival: I’ve never met Klem, but he’s always been one of my idols. He’s known for his dynamic climbing style and traveling around opening some of the best bouldering areas in the world. At one point he stopped publicizing his ascents after realizing how the media only cared about grades and difficulty. I completely understand where he is coming from with this and admire his stance.

Schulte: The problem is often wet. How many days did you spend on the original line?

Hukkataival: I’ve lost count. The weather made it very challenging with the boulder often being wet. Last October I came back to try the sit-start only to find it wet for the entire two-week trip.

Schulte: How many days did you spend on this sit-start?

Hukkataival: I climbed the stand-start last year on the last day of my trip, so I didn’t really get to try the sit project. Then I came back last October only to find it to be wet the entire time. And now this trip I had to work out the stand-start again and then start working on linking the whole thing.

Schulte: Describe the movements leading into the standing start – is it obvious addition to the line?

Hukkataival: It’s the complete line. Sit-start on a big slopey break. Four big, tensiony moves into the stand that made the full link much harder than I first imagined.

Schulte: How would you describe the overall feel of the problem?

Hukkataival: It’s a proud, mean-looking wall when you first walk up to it. The rock is incredible, bullet granite.

Schulte: Describe the area and setting.

Hukkataival: It’s sit a just outside the main area of Maltatal, in a little pine forest.

Hukkataival: May 1st which is Labor day in Europe. Around 2 p.m.

Schulte: What kind of day was it?

Hukkataival: Conditions were not ideal. It was a little warm and humid. In all honesty I wasn’t expecting to do it that day, but one thing I learned with Bügeleisen
is that if you get a chance, even if it’s not perfect, you go for it. Somehow it worked out!

Schulte: So how hard is this rig?

Hukkataival: It could be the hardest problem I’ve climbed so far! It’s hard to say how much the weather contributed, but knowing how good the boulder is, I’m sure it won’t be too long until more people will try it.

Schulte: What beta would you give for this line: it could be physical/mental/spiritual?

Hukkataival: Whatever you do, don’t upset the weather gods like I clearly have!

Hukkataival: Nine. I don’t know if a perfect 10 even exists.

Schulte: How many FAs have you done in the last year?

Hukkataival: Around a 100. Quality over quantity. I’d rather open one classic line than 10 mediocre ones.

Schulte: Break down the places the FAs have been in:

Schulte: Can we look forward to a video of the send?

Hukkataival: There is a video in the works!

Check out this video of Hukkataival making the third ascent of Bügeleisen’s V14 stand-start.

Bügeleisen-Nalle from Dominik Preis on Vimeo.