With Joe Mama, his first 5.15a send, Bečan adds to the growing list of 5.15 sport routes in Oliana. Rock and Ice caught up with Bečan
to learn more:

How long did you spend projecting Joe Mama?

I tried the route for the first time in December when Chris [Sharma] was trying it and Joe [Kinder] was still there. Since then I came back in Oliana once
or twice a week with a focus only on this route.

Normally I prefer to onsight and try as many different routes as possible and don’t care much about climbing them in the end. But with this one I wanted
to do it before I even tried the next one. So I was climbing it as a warm up and cool down at the end of the day as well. All my focus was on this
route, which helped me in the end I think.

It also helped to try the route with Chris who gave me all the beta and made it much easier to understand it. It was also fun to try route with him since
we were both so close to doing it for a long time and we helped each other with some small little details of how to get to the final jug.

It’s interesting that you mostly choose to onsight instead of project routes, especially at such a high level of climbing. Why do you prefer that style over redpointing?

I like to climb and figure out the moves on the way, while I’m doing it. Normally I don’t even care if I do the route in the end but still I prefer a good
fight to an easy top. That’s why I normally choose routes above my limit.

Onsighting also shows more how well you can climb, since with redpointing you can just work on the moves and eventually you will do them all. With onsighting
you only have one chance and I think that makes it more fun and rewarding if you can figure it out. The best style for me is “a vista total” where
I go to a climbing area without a guidebook and I don’t know even the grades. It’s funny to see after what I was climbing and why it was so hard. 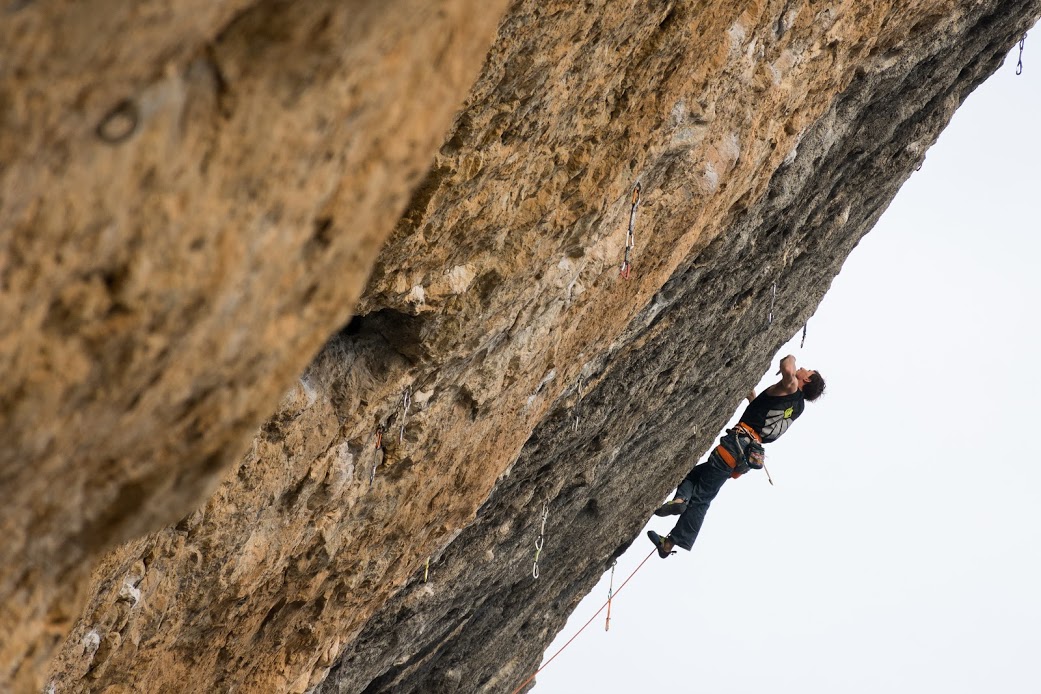 You’ve been climbing for 25 years now. What is it that keeps you motivated to keep climbing at your limit?

I don’t get stuck with only one type of climbing. I try to do as many different things as possible from long to short routes, bouldering, ice climbing,
multi-pitch climbing, training in a gym or just campusing. There are always lots of different things to do so it never gets boring.

Another thing I like is traveling and discovering new places and people. With climbing you can get lots of this and if you are out of energy and motivation
there is always someone to cheer you up and motivate you for your next hold.

How would you say your style of climbing has evolved over that time? Have you always had an onsight mentality, or has that developed over time?

We used to work a lot on routes but soon I found that you can climb much more if you go for easier routes and do them faster. It’s also less stressful
since my main goal has been always to climb and not just send. I never had a problem of reading rock so I can predict quite well what is around the
corner or where the holds are hidden (I only have problems finding artificial holds that people used to in weird places where they wouldn’t exist naturally).

As you’ve become a stronger climber, you’ve garnered more attention from the climbing community. Is there any pressure that comes from the attention you’ve received recently?

No, I have no problems with that. Luckily there are always a lot of strong climbers around here in Catalonia and there are people that get much more attention
so I can enjoy and climb more tranqilo.

What would you consider to be among your biggest climbing successes? What are your goals for the coming years?

My biggest success is I’m still climbing after 25 years and I’m even more psyched than in the beginning. It’s cool I can climb anything from boulders,
routes, multipitch climbs, ice, trees… And I like it all. I’m also proud of my competition career and the onsight ascents I’ve done, especially first
ascents.

But here the story will not stop. For a long time I want to onsight 9a [5.14d]. I’ve been close a few times and hopefully one day I will get to this main
goal. And yeah, 9b [5.15b] or something harder would be also cool to do.

Watch Klemen Bečan on the first ascent of Joe Mama (5.15a):

Anja Bečan has written about and photographed many of her adventures with Klemen. Check out more of her work by visiting her blog. To read more about Bečan and his climbing life, take a look at his new landing page.

Klemen Bečan Puts Up New 5.15a in Oliana, Spain