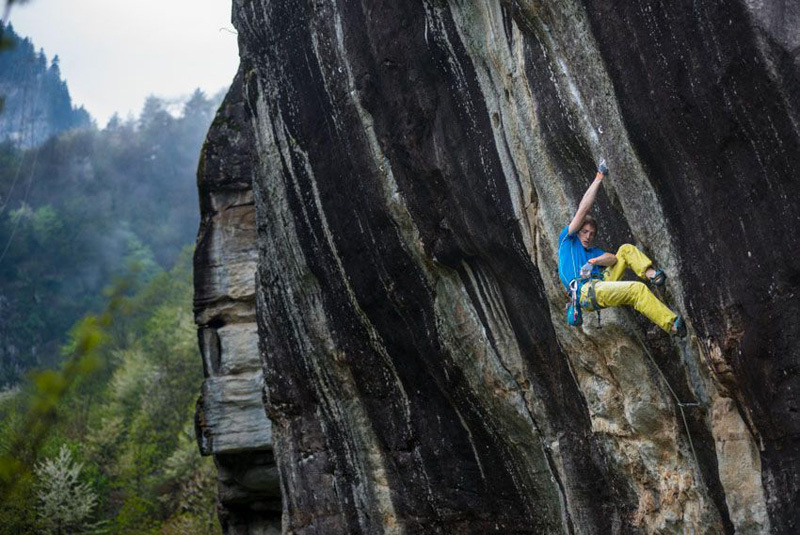 Pearson&#39;s Blog ” />James Pearson of the U.K. has made an impressive second ascent of A Denti Stretti (5.14a) at Balmanolesca– a crag in Italy’s Val d’Ossola. What’s perhaps even more impressive is the fact that Pearson opted not to clip the bolts of the route, and instead placed natural protection in the route’s seams and faint finger cracks. Pearson is not the first person to bring these traditional tactics to the sport climbs of Balmanolesca. In 2011, Yuji Hirayama climbed the nearby Profondo Rosso (5.13c) with natural protection.

“I had heard about Yujis ascent from my Italian friends and was very motivated to give it [Profondo Rosso] a try, but I also heard about the even harder line to the right that ‘might just work’ on trad,” writes Pearson on his blog.

Pearson decided to give A Denti Stretti an onsight attempt with trad gear despite the “cobwebs” covering the route. “It had obviously been a long time since anyone’s last visit,” writes Pearson. In fact, the route had not seen a second ascent–bolts or no bolts–since it was established in 1995 by Italian Alessandro Manini. But Pearson set off on A Denti Stretti racked only with nuts and cams, and surprisingly fought his way to the last moves of the route.

“I somehow managed to scrape my way through, despite feeling like I was falling off,” writes Pearson. “[S]ometimes real magic can happen during an on-sight!”

Pearson says he arrived at the final boulder problem of the route thinking, “I might actually do this thing!” But the final moves of A Denti Stretti proved to be desperate, and he fell just below the chains, taking a huge gear-ripping fall down half of the route.

Pearson then pulled back on, but despite trying the move in isolation, he was unable to execute the last boulder problem. “I tried the move a few more times, fell a few more times, and lowered off with big respect for Alessandro Manini all those 18 years ago!” writes Pearson. After lowering, Pearson was greeted by Manini himself, who encouraged him to give the route more tries.

Motivated, he returned to Balmanolesca a few days later to try A Denti Stretti again, although rainy weather had worsened conditions. “After a few easier pitches to warm up, I made my first attempt of the day,” writes Pearson. “Despite my supposed new found familiarity with the route, I climbed terribly, far worse than during my on-sight attempt, and finally fell in the middle crux after completely forgetting my sequence.” Pearson says he admitted defeat, but towards the end of the day he decided to have another attempt “just for training.” However, this time he fell only a few moves up the route. Still he decided to try the route one last time. “Then I climbed to the top and it all felt easy!” writes Pearson of his unexpected ascent. “It’s funny how you can make your best performance when you least expect it.”

For more photos of Pearson’s ascent, visit his blog here.