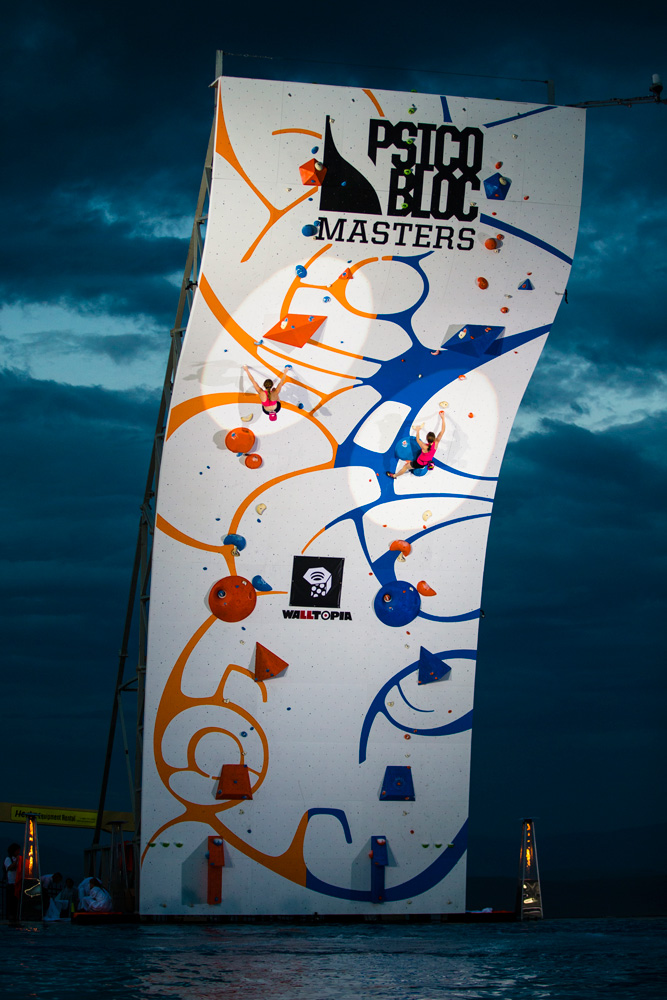 Photo:Steve RokksPsicobloc Masters in Park City, Utah is likely the most watched climbing competition of the year. With big names such as Chris Sharma, Jan Hojer, Nina Williams, Emily Harrington and Alex Johnson—to name a handful—racing side-by-side, free-solo, on a towering 55-foot wall above water, it’s no wonder why it’s a crowd and athlete favorite.

This year, 12 male and 12 female “Masters” from around the world, joined by an additional four male and four female “wildcard” climbers who made the cut
in qualifiers, put their skills to the test. The competition requires not only power and technical prowess, but also speed and boldness above the bubbling
Olympic Park aerial ski training pool.

In finals, which took place on August 4, competitors were matched based on their best performance (time or highpoint) out of two seeding rounds the day
before. Two competitors climbed simultaneously on identical routes, side-by-side. If both competitors made it to the top, the faster climber moved
on to the next round while the other was eliminated. If one or both climbers fell, whoever made it the highest continued to the next round.

Michaela Kiersch, who had the fastest seeding time, was paired against JC Hunter, who ranked 16th in seeding—the fastest paired with the slowest,
and so forth. Angie Payne (8) went up against Emily Harrington (9), Tori Perkins (5) against Andrea Szekely (12), Paige Claassen (4) against Jules
Jimreivat (13), Natalie Bartschi (3) against Lily Canavan (14), Meagan Martin (6) against Alex Johnson (11), Nina Williams (7) against Kyra Condie
(10), and Sidney Trinidad (2) against Claire Bukowski (15).

Eight women moved on to quarterfinals to take on a different competitor, and then the top four from quarterfinals continued to semifinals: Kiersch versus
Perkins and Bartschi versus Trinidad. The route remained the same.

Kiersch and Trinidad moved on to face each other in the championship round, and Kiersch, 21, from Chicago, Illinois, took the title of 2016 Psicobloc Masters
Champion.

“I am super psyched to have won [Psicobloc]!!” Kiersch posted on Instagram. “HUGE congrats to [Sidney Trinidad] for taking second in an extremely close
final race.

“I know that some of you may be wondering why I didn’t take the big plunge from the top of the wall instead of down climbing a few feet… Let me be very
honest – I am so scared to jump off. At the end of the day, I was a big weenie and couldn’t convince myself to do it. I had fun nonetheless and look
forward to coming back next year.” 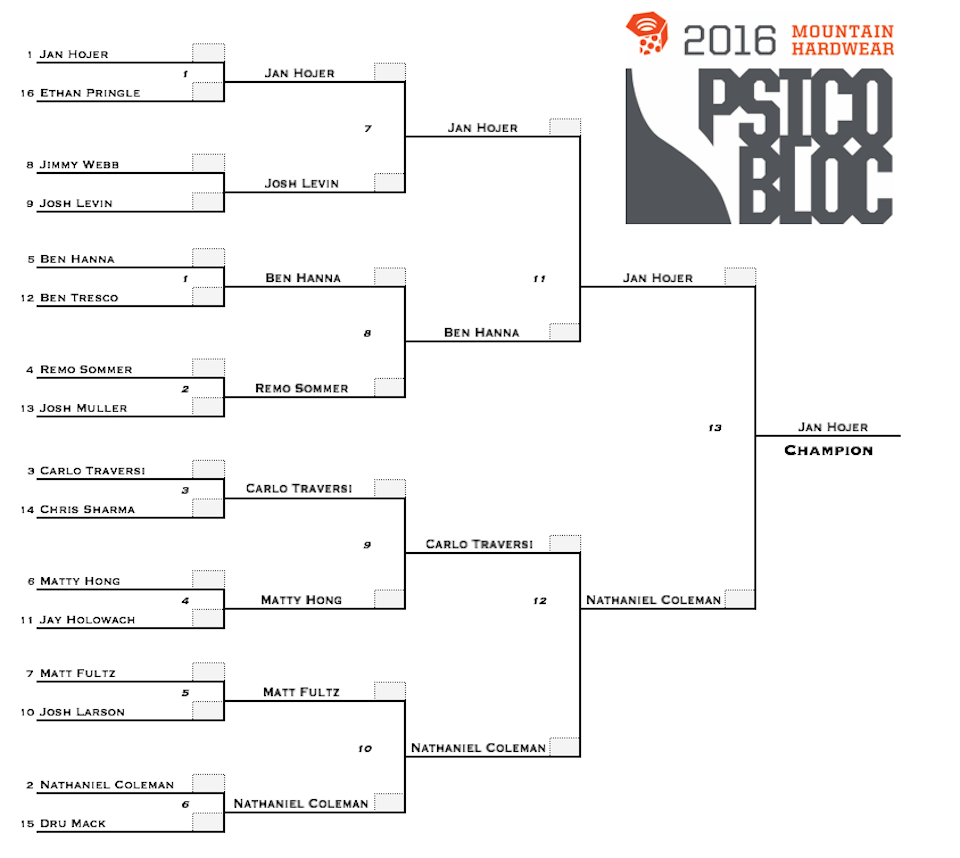 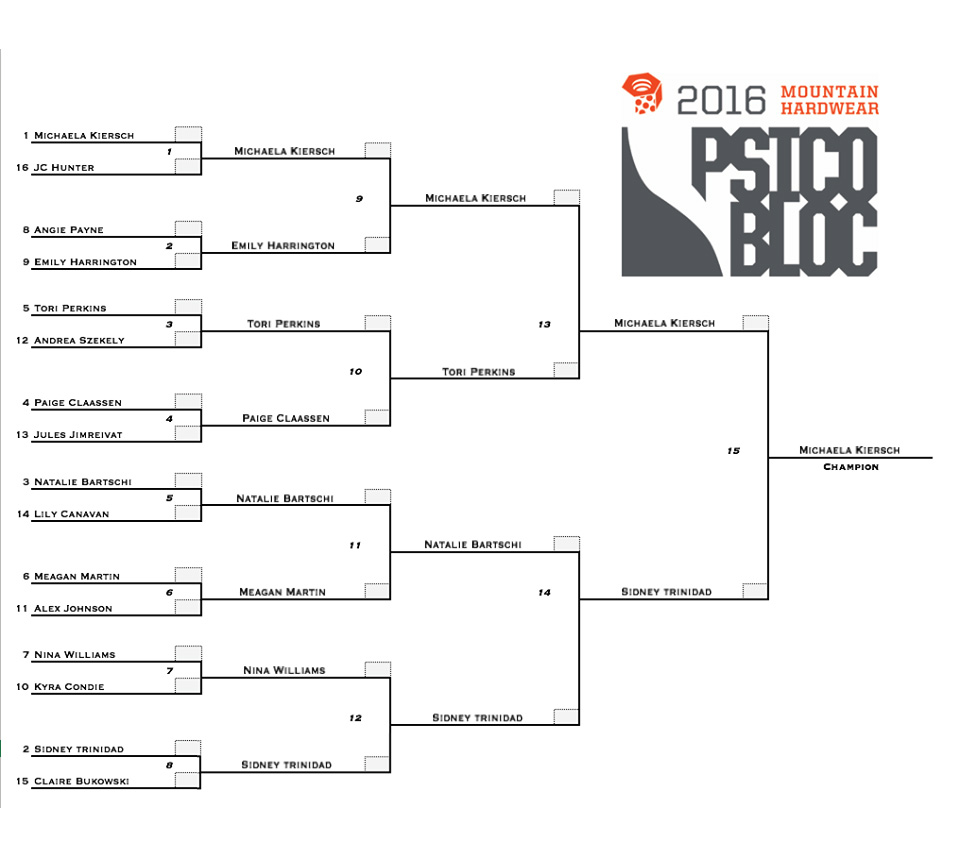 The men’s route was similar to the women’s, although intermediate white holds were removed to up the difficulty from around 5.12+ to 5.13+.

The men’s field was cut in half for quarterfinals and cut in half again for the semi-final round where only Hojer, Hanna, Traversi and Coleman remained.
By this point, each competitor had climbed the route four times, twice in the seeding round and twice in finals. They knew the moves, knew their competition
and cranked up the speed. In two closely matched climbs, Hojer beat Hanna and Coleman beat Traversi. 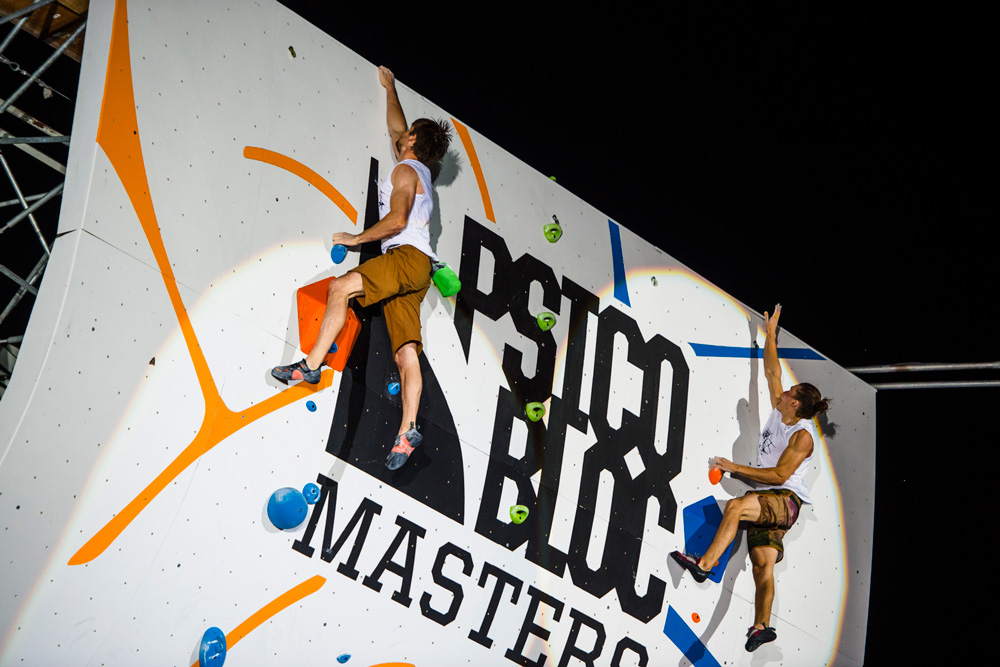 Photo: Steve RokksHojer of the old guard and young-gun Nathaniel Coleman, the last two men standing, moved on the championship round. They traversed the jug rail out to the start holds and at the signal, took off in perfect synchronism. Three-quarters the way up the wall, they were still tied neck-and-neck—until Hojer dynoed past a hold and gained a slight lead. He held the advantage over Coleman as they neared the top. In a photo finish, Jojer and Coleman both leapt for the top edge, Coleman only a hand-length behind Hojer. But Coleman came short of grabbing the edge and fell 55 feet to the watery depths below.

Hojer, 24, from Germany, was victor. He tossed his climbing shoes and chalk bag to the ground behind the wall, and made one last jump from the top of the
wall.

Watch the full replay of Finals: