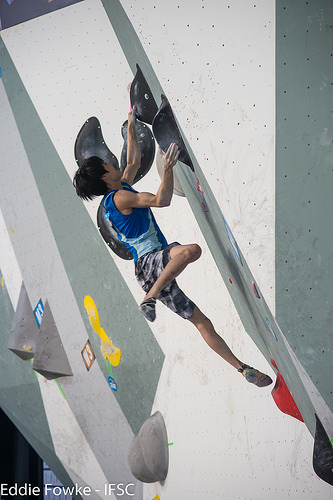 The first IFSC Bouldering World Cup ever held in Navi Mumbai, India saw many surprises—from first-time
victors to podium regulars who were bumped out early on.

In finals, which took place this Sunday, Nonaka topped out two of four problems in four attempts and reached the bonus hold on three problems in six attempts.
She was the only female competitor to finish two finals’ problems. In second place, Monika Retschy, of Germany, flashed one problem and reached all
four bonus holds in 10 attempts. Japan’s Akiyo Noguchi and France’s Melissa Le Nevé tied in finals with one flash and two bonus holds in two tries,
but Noguchi placed ahead because of her semi-finals performance. Sol Sa, of Korea, and Katharina Saurwein, of Austria, rounded out finals with fifth
and sixth place finishes.

Lisa Chulich was the top women’s finisher for the United States. She qualified for semi-finals and landed 18th overall. Sarah Pearce, the only
other female U.S. competitor came in 27th. Peter Erard, the one and only male competitor representing the U.S., placed 39th.

For the first time this season, after first-place finishes at the last two bouldering world cups in Chongquing, China and Kazo, Japan,
Great Britian’s Shauna Coxsey missed finals. In the semi-final round—consisting of the top 20 finishers from qualifiers—she only managed
to top out one of four boulder problems, which landed her in ninth place overall. The top six competitors from semi-finals moved on to finals. 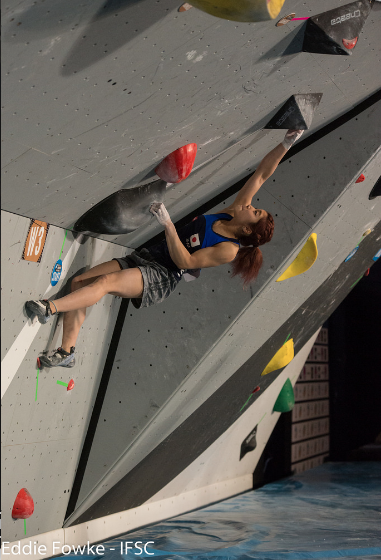 Despite
the outcome, Coxsey maintains a strong lead in the overall bouldering world cup ranking with 337 world cup points, ahead of Le Nevé in second with 258 points and Nonaka who climbed into third with 254 points.

German strongman Jan Hojer was another Navi Mumbai surprise. He too missed finals, a rare occurrence, and placed 18th overall. Hojer is currently
fifth in the overall men’s bouldering world cup ranking, behind
Gelmanov in fourth, Narasaki in third, Rubtsov in second and Fujii now in first with a 13-point lead.

In the National Team Ranking at Navi Mumbai, Japan took first with 412 points, followed by France in second with 185 points and Germany in third with 120
points. Austria, not far behind, and Russia rounded out the top five teams with 119 and 116 points. The U.S. came in 12th out of 19 nations
that were present at the competition.

Overall this season, Japan is first in the National Team Ranking with 793 points, followed by France with 712 points and Great Britain with 612 points. The U.S. is 13th overall with 119 points.

The next and second to last IFSC Bouldering World Cup of the year will take place on May 20 – 21 in Innsbruck, Austria. Check back for live streaming and
results.