When I talk about mind control, I mean the psychology of putting your mind and thoughts in the optimum place for a perfect performance.

A few times a year, things will occur that are really important and potentially challenging for you. It might be a job interview, speaking in front of a large audience or you’re trying to redpoint a route you’ve been working on for a long time. Your head might be spinning with stress, maybe you didn’t sleep well thinking about your project. This is when you need to know about mind control.

I would like to tell you my personal experience of why I sought to find out and desperately needed to know how my mind was working.  I never really had a problem climbing on the crags.  I  have always been strong mentally whether redpointing, bouldering or on-sighting.  I loved the fact that if you fell off, for the most part, you could just try again.  If I got frustrated, the anger would sometimes help to get me up a route.

I knew I would always give 100%. There have been times when I have been climbing and people have been shouting up to encourage me.  I used to think there is nothing you could say to make me pull any harder or give it more, absolutely nothing. I loved giving it everything I had.  That’s what climbing was to me.

In the late 1980s, competitions came along.  I went to my first competition with an excellent track record on crags, feeling strong and confident.  However, when I pulled on to the competition wall I found I had different thoughts in my head. Firstly, I didn’t like climbing on plastic holds.  This was an era before indoor walls became popular and I was inexperienced both climbing indoors and competing. Secondly, I didn’t like being told exactly when I had to climb and I didn’t like having an audience. I didn’t want to fall off low down and I had a fear of failure. In short, so many things concerned me that I was unable to focus on my climbing.

I didn’t perform as well as I wanted in my first competitions. I think I got a third place in a big competition and a first in a small one.  Not all the best climbers were at the small one so to me it didn’t really count. I incorrectly analysed where I thought my problems lay. I trained harder, got stronger fingers, more power, got more consistent outside and lost weight.

In 1989, there was a big competition in Munich.  I was living in Germany at the time and climbing well.  I believed my performances on the rock should see me get a great result. I was already strong.  The week before the competition I went on a low carbohydrate/salt diet getting my weight down to 61 kg (my natural weight now is 80 kg).  The big day arrived and I climbed so badly on the first route. It was way beneath the grade I would normally on-sight easily.  I was frustrated and angry with myself.  Somehow, I got through to the semi-final, but only just.

The next route was better for me, a delicate slab up to a big overhang. I had loved slab climbing on granite crags in America and also loved overhangs as it suited my bouldering strengths. I qualified first on this. “Thank Heavens”, I thought to myself. I had now beaten all the other top competitors once, I just needed to do it again in the final.

In the final, I walked out in front of the crowd not really knowing what or how I should be thinking, I had no point of focus. There was a delicate slab arete up to an overhang. I started up the slab, a couple of metres off the ground I was crimping hard on an edge looking up wondering what to do. The next thing my foot popped and I was hanging on the rope.  I was absolutely devastated and went straight to the bar and drank beer as quick as I could. I took my performance really badly and barely slept for a week.

Looking back, I could not have handled the situation worse as I thought about my failure again and again.  I was reinforcing the negative, telling myself things like “I can’t perform in competitions, I’ll never win, I don’t like performing in front of the crowd, what a waste of all that hard work and training, I am rubbish”.

Later, when I had calmed down, I reflected on my performance.  It was obvious to me I should not compete again without trying to sort my mind out.  I spoke to my parents who said they had just read an article in the newspaper about a girl whose sport was archery. The girl had read a book on mental training and after reading the book went on to win consistently.  We managed to contact  her through the newspaper and obtain the book ‘With Winning In Mind’ by Lanny Bassham, an Olympic gold medallist in rifle shooting.

I had only one month to prepare for the next competition which was to be the first ever World Cup event.  It was to be held in Leeds, England.  Competitions in England at the time were not popular and had bad publicity. The older, more traditional climbers saw them as a threat to their sport because the early competitions had been set on normal crags. They thought in the future the cliffs would be closed to hold competitions. Artificial climbing walls were very much in their infancy. It was my goal to win that Leeds competition. I wanted to prove competitions were a good thing and that British climbers could compete amongst the best in the world.

I knew that to climb better in competitions I needed a stronger mind for those situations.  I threw myself head-long into Lanny Bassham’s book, reading it daily, writing notes and doing as he suggested.

By the time the competition came along my head was in a different place.  I didn’t hope to win Leeds, in my head I knew I was going to take the competition by the scruff of the neck and win, no matter what the cost.  Simon Nadin, Didier Raboutou and I all touched the same holds high up in the final, so it ended up going to a super final.  I had everything rehearsed, visualised and was prepared for every eventuality.  I knew I was going to win.  It was my time, my competition. I then went out, completed the route and won. I am absolutely sure if I had not read Lanny’s book I would not have won. I competed for about another year, consistently winning and ranking number one in the world in ASCI rankings.

When you consider it, in all sports nearly all the winning is done by a tiny percentage of the people competing. The same people win again and again and again. What’s the reason for this? It’s the way they think. The confidence they have prepared well and that they believe they will win.
Mind control starts with a decision. For people who succeed that decision is – I’m going to be victorious and get it done. The exciting thing is that this mindset can help someone improve their performance and exceed their expectations whatever their realistic level of performance. The same mindset that helps a 9a climber perform well can also help someone on their first 6b.

To become better at something you need education in the thing you are trying to get good at.  I started my climbing career in the 1970s and since then I have met and talked to the very best climbers worldwide and some world champions in other sports.  I have asked the questions and importantly listened to their insights to get that education to better myself.
In 1981, at the age of 19 I travelled to America which then had the hardest climbs in the world. I spent some of that winter climbing with John Bachar who was probably the best US climber at the time. I learnt a lot from him and started to lay down some of the foundations for my climbing career.  I had never heard of stretching, warming up, rest days and eating well. I just figured the more I climbed, the better I would get which had worked pretty well up to a point.

Throughout my career, I have done a lot of reading about training, diet and bodybuilding which I found helpful for weight training. Education of a Bodybuilder by Arnold Schwarzenegger had just come out. Much later on in 1990, when I was back in the UK, I built a training board in my cellar in Sheffield.  I framed some pictures of Schwarzenegger pumping weights, pushing through the pain barrier. Also in that picture was a quote from Arnie

“I knew I was a winner. I knew I was destined for great things. People will say that kind of thinking is totally immodest. I agree. Modesty is not a word that applies to me in any way. I hope it never will.”

From a totally different angle, I enjoyed books on Zen, mind control and the writings of Bruce Lee who said “Become what you think.  What you habitually think largely determines what you will ultimately become.”  For me, this is a key thought.

I have interviewed a few world champions and some great climbers in the research for this book.  Common thoughts run in the minds of these people.  In basic terms, if you don’t think you are going to do well, then it’s quite probable that you are not going to do well. You might, but the chance is less.  Be confident and just focus on climbing and having fun. If you can convince your mind that you are sure you can do it, then you have the best chance of succeeding. 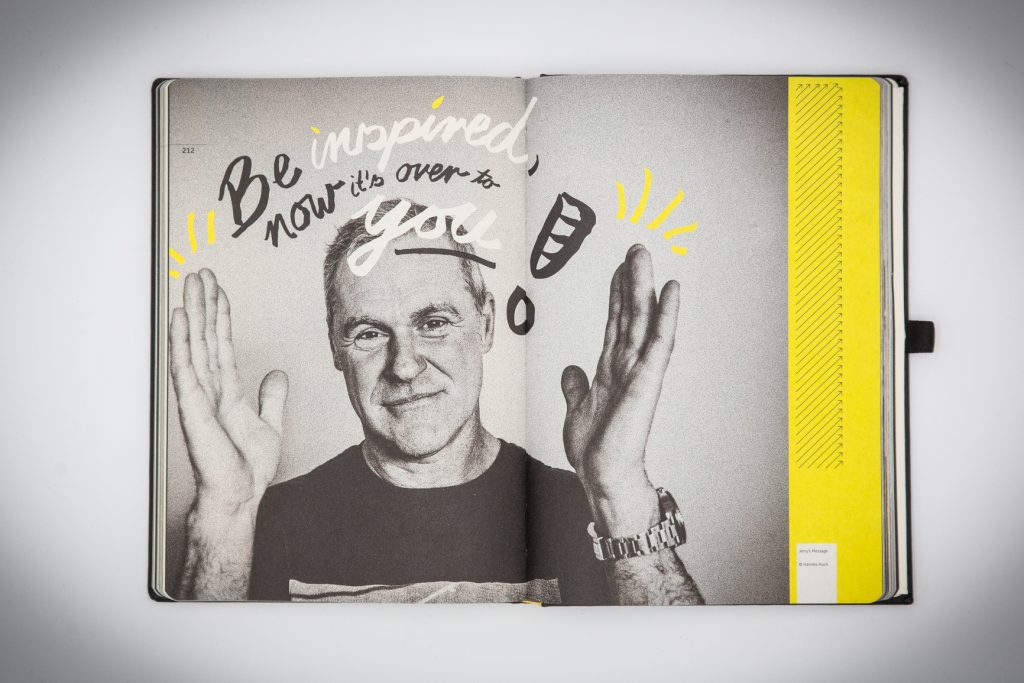 To pick up a copy of Jerry Moffatt’s MASTERMIND, visit http://trainingforclimbing.com/buy-books/jerry-moffatts-mastermind/