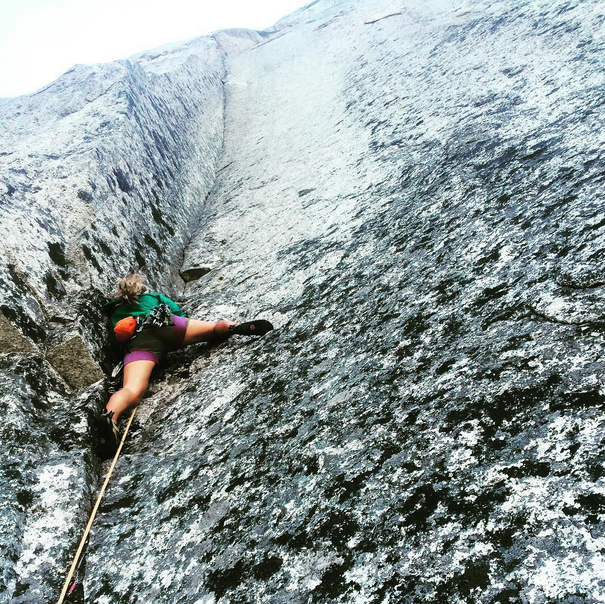 Brette Harrington nearly flashed Edge of Pan—a blank granite corner in Squamish, Canada, established as an aid climb—but she slipped near the top, her legs pumped from the relentless stemming. Harrington, 23, continued to the anchors then lowered to give her climbing partner Jesse Huey a catch.

“I went for an onsight attempt (but it was more like a flash [attempt] because we inspected the gear on rappel),” Harrington told Rock and Ice.

Harrington passed the sharp end to Huey, who had been working the route on and off for several years. The conditions were right, and with the route dialed, Huey stemmed his way to anchors for Edge of Pan’s second free ascent.

“Yesterday will be one of those perfect Squamish days that I will never forget.” Huey wrote on Instagram. “Yesterday supported with a ton of positive energy from great partners I managed the second ascent.

“It has been a while since I have been that inspired by a route to dig so deep to pull it off.”

Edge of Pan, on the Pan Wall of The Chief in Squamish, was an aid climb (5.8 A3) put up in the ‘80’s by Jim Brennen and C. Thompson. A few years ago, Marc-André Leclerc envisioned the line going free. He added anchors and cleaned out the old knife blades still stuck in the crack.

In 2011, Sonnie Trotter made the first free ascent, calling it 5.13b R. On an earlier attempt, Trotter took a massive fall that ripped out nine pieces of protection—enforcing the “R” rating.

Harrington, however, found better gear beta. “It’s a super thin crack that I protected with about 25 micro cams and offset nuts,” she says. “Each piece needed to be placed with finesse,” but, “all of my gear was bomber.”

She returned to Edge of Pan on July 20 with Leclerc, and on her first go, she sent the route, claiming its third free ascent and the first female ascent.

“It’s a 40-meter pitch, exactly,” says Harrington. “The stemming lasts for about three-fifths of the climb, then there are some layback moves and a boulder problem at the top.

“There are two more pitches that follow, an 11d and a 10c, that I lead out. They are still very mossy and dirty, but have great potential for making a superb line.”