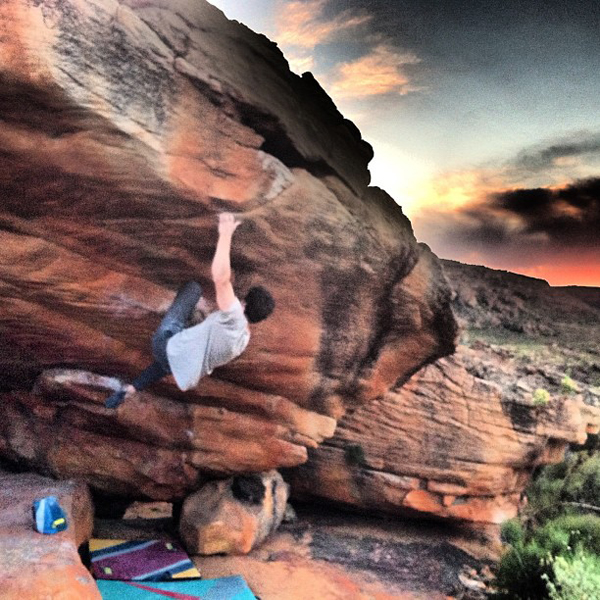 Jimmy Webb has been busy in Rocklands, South Africa, crushing boulder problems and flashing testpieces. Since arriving in the country a couple of weeks ago, Webb has managed repeats of several hard lines, including Mooiste Meisie (V13), Derailed (V14), and Golden Shadow (V14) as well as flashes of The Vice (V13) and Sky (V14). According to his 8a.nu scorecard, Webb managed to climb Derailed on his second try and suggests V13 for the problem (for the record, the ticklist on 8a.nu for this problem includes names like Dave Graham, Daniel Woods, Paul Robinson, and Adam Ondra, all who suggest V14). Perhaps most impressive, however, was Webb’s flash of the Daniel Woods’ problem Sky, which also has been rated V14 by the vast majority of climbers who have recorded it on 8a.nu, but Webb has suggested V13. Webb had this to say about Sky, “Such a rad bloc. Props to Daniel for establishing this incredible line. Fit me perfectly. 8B+ flash sounds nice but this is just not the case. At least for my height.”

In other news out of Rocklands, climbers Matt Fultz and James Kassay have also been busy, each managing to repeat Sky, Derailed, and King of Limbs (V14). In addition, Kassay also redpointed Amandla, yet another V14. Kassay recently redpointed a direct variation of the famous boulder problem The Wheel of Life last fall, suggesting a possible V16 for the grade.

Check out this video of Ethan Pringle on Sky in Rocklands: