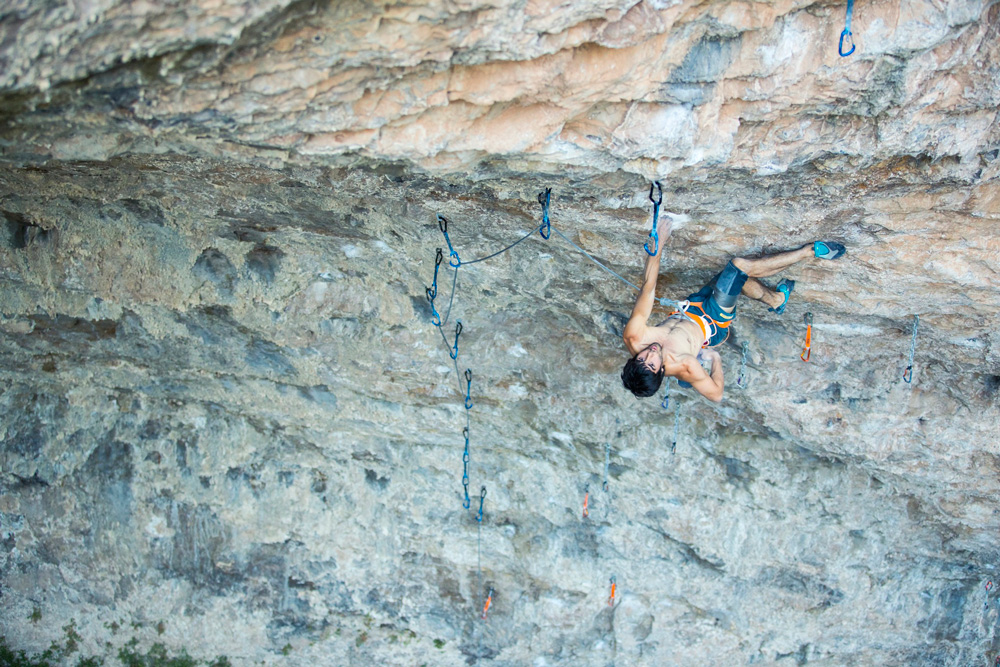 Jon Cardwell, back from France, has made the first ascent of Fat Camp (5.14d) in the Wicked Cave, Rifle, Colorado. The steep roof line, equipped by Joe Kinder, is a contender
for the hardest route in the limestone canyon.

“The climb is a pure power-endurance challenge with almost no proper resting positions,” Cardwell tells Rock and Ice. “In some ways its similar
to Bad Girls Club [5.14d],” a classic Rifle test-piece to the right, “as they take a very similar line in the cave, but many of the moves [on Fat Camp] are
more difficult and there’s almost nowhere to rest like in BGC.”

The route climbs through one of the steepest sections of the Wicked Cave, an area long thought to be climbed out. But Kinder envisioned, cleaned and bolted
the line a few years back. “He graciously left the project open and told Matty Hong and I that he’d be excited if we tried it, even climbed it!” Cardwell
says.

“I have to stress, this is a seriously awesome thing for Joe to do, as in the end, this route dubbed ‘Fat Camp’ by Joe, is super classic and in my opinion
the most difficult climb in Rifle.”

Cardwell first attempted the project after returning from France this July—where he sent Chris Sharma’s benchmark 5.15a Biographie/Realization in Céüse, his first redpoint of the grade.

“My first couple days were tough on the new project,” he says. He and Hong sorted through the beta and figured out the moves. “I quickly realized that
I would have to gain more power for a lot of the moves, because I was getting so pumped!”

Cardwell took a break from Rifle to log some bouldering hours and returned to the canyon last week. He was there to coach the Movement Climbing & Fitness youth team on their annual outdoor climbing trip. While he spent most of his time with the team, he was able to sneak in a few Fat Camp burns.

“I started giving it attempts in the evenings,” he says, “and soon things started to come together.
Finally yesterday afternoon after a huge fight, I made it to the top of the wall for the first free ascent!”

Cardwell says it took him around 10 tries over the week to redpoint. He clipped the chains on August 9, the last day of the trip. “It was awesome having
[Lee Sheftel] there for support, and Matty belaying, also a couple of my youth team kids!” he says.

According to Cardwell, Fat Camp stands among Planet Garbage (5.14d) and Shadow Boxing (5.14d) as a contender for the hardest climb in Rifle, though he doesn’t think it tips the
5.15 mark.

“5.15 in Rifle definitely sounds nice, but I’m hesitant to propose that for Fat Camp. The climb is definitely in my style as opposed to Biographie/Realization,
my only true reference of the grade.

“With all things considered, and with [Fat Camp] coming together quicker than I first thought, I think 5.14d is appropriate.

Even though the first 5.15 in Rifle remains elusive, the canyon continues to deliver.

“It’s super inspiring to me that someone puts the true hard work into developing these climbs, and just says, ‘Hey guys, enjoy!’ That’s definitely commendable,”
Cardwell says. “Joe, along with other developers keep the canyon alive with activity.”

Jon Cardwell’s Biographie (9a+ 5.15a) Training and Projecting Advice