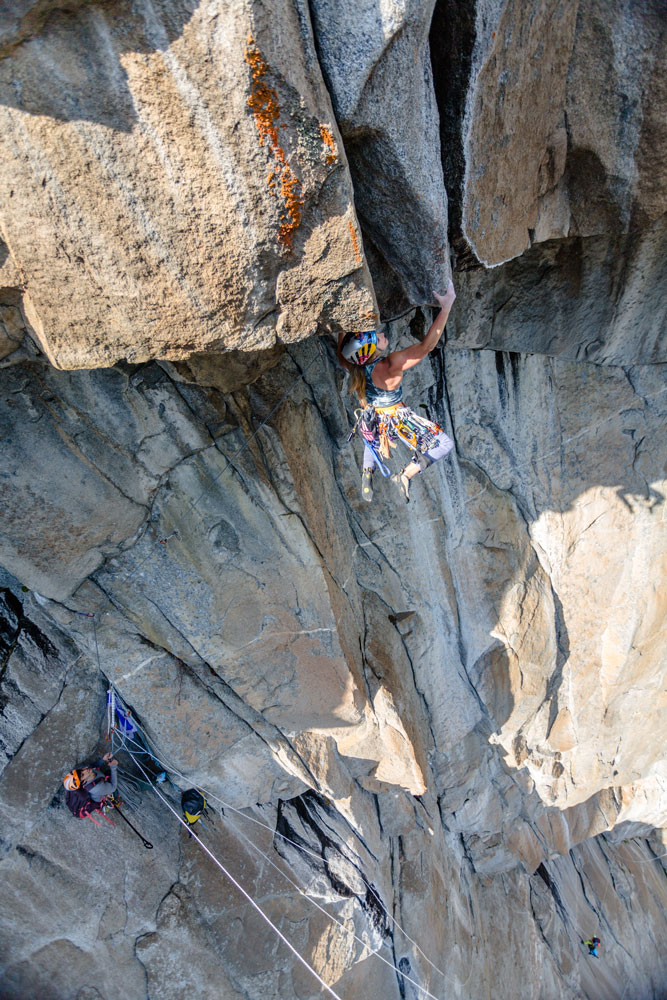 On May 27, 2017, Jon Cardwell, Sasha DiGiulian and Marcus Garcia completed
the first continuous free ascent of the Misty Wall (5.13a), via a roof variation, in Yosemite Valley, California. The original aid line
up the iconic 1,700-foot big wall was first climbed by Royal Robbins and Dick McCracken in June 1963.

Garcia and Cardwell had freed all 15 pitches last September using a variation that busts dynamic moves out a big roof (see photo), followed by 5.12 face
climbing to an exposed hanging belay, before the line rejoins the original Misty Wall route. The next pitch tracks a spectacular 5.11+/12-
splitter crack up the 95-degree headwall, ending on Party Ledge. Then a short 5.7 chimney to the top. Winter came, however, before the pair could tick
the whole shebang in one go.

The climbing—which largely follows the steep, sickle-shaped corner several hundred feet right of Yosemite Falls—is stout, at 5.13a; but the
bigger challenge is linking all the pitches in a mega-endurance push.

This year, Cardwell (one of the few climbers worldwide who boulders V15 and leads 5.15) and DiGiulian
(recently returned to 5.14 form,) were both coming off strong seasons sport climbing and training in Spain. But during their two days of sessioning the route prior to the send, DiGiulian
could only manage short sections of the thuggish roof pitch, and was never close to linking it.

During the push, when they reached the crux roof from the ground up, they had only 90 minutes of light left, and DiGiulian was wasted from the 5.10 squeeze
chimney and several 5.11+ pitches below. Yet she went for the lead and powered through the roof on her first try. She later said she only had one go
left in her, so she put it all on the line for the send.

The team needed most every ray of daylight to complete the push, topping out 14.5 hours after starting at the base that morning.

The long hike down the Yosemite Falls trail, which they managed in the dark with headlamps, is all swirling mist and spray from the gusher, roaring like
Kingdome Come. For a cranker, airball thriller, with unique features on diamond-hard stone, the Misty Wall might be hard to beat. 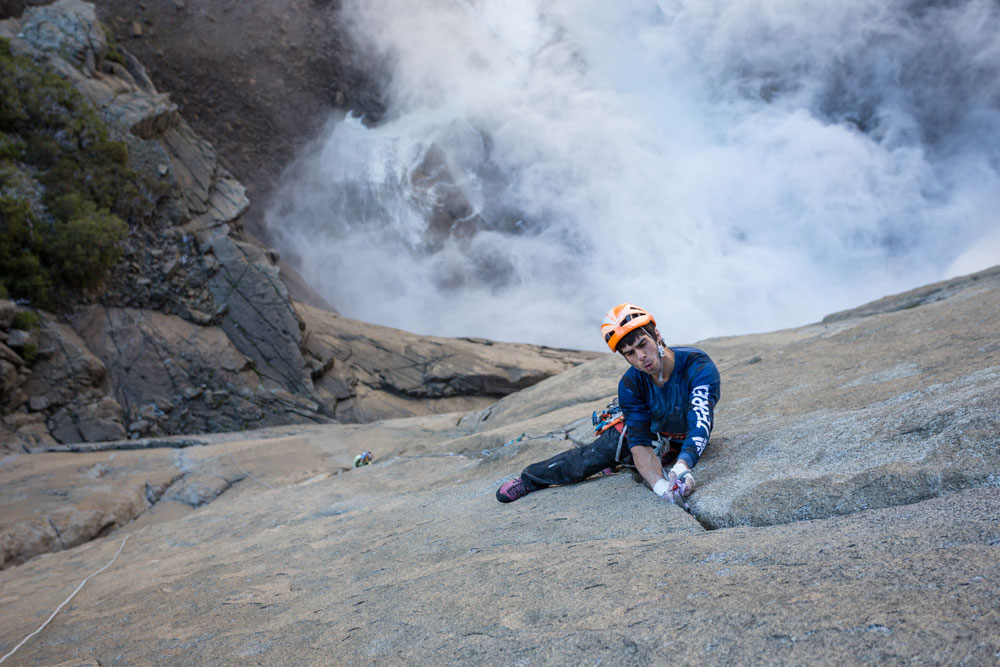 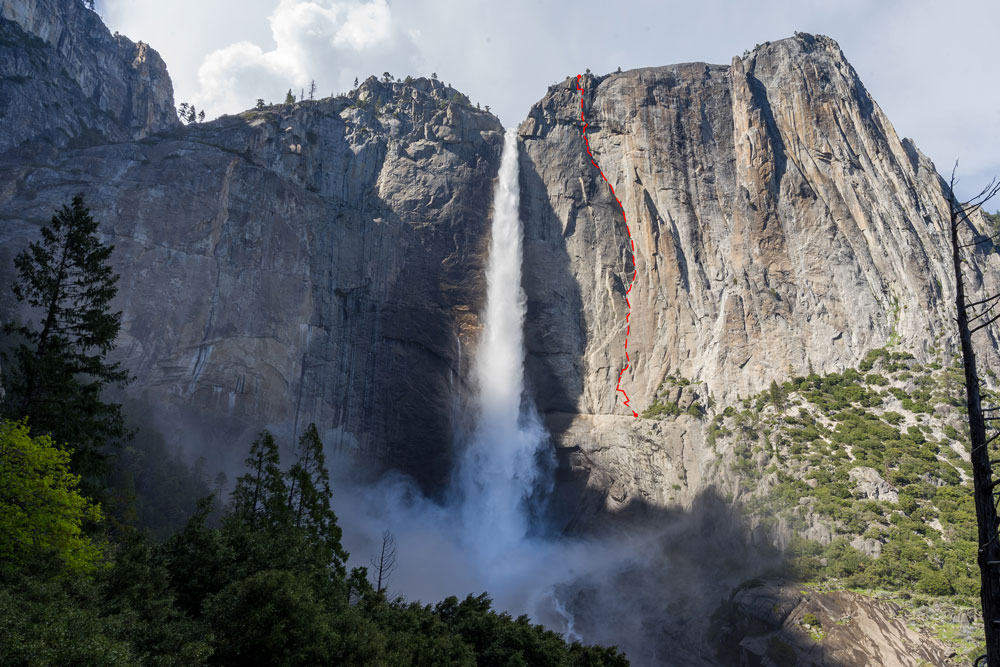 Several weeks before the Misty Wall send, Chelsea Rude and Ron Fundeburke made the first continuous ascent of the Central Pillar Direct and Marcus Garcia and Rita Shin made the first
ascent of Cosmic Girl on the North Face of Middle Cathedral in Yosemite—routes two and three of the adidas Outdoor “Legacy Project”.

[On September 30, 2016, fifty six years after Tom Frost and Yvon Chouinard claimed the first ascent, Kevin Jorgeson and Ben Rueck make the first free ascent of the 1,600-foot West Face (IV 5.12+) of Sentinel in Yosemite
Valley as the first route of the Legacy Project.] 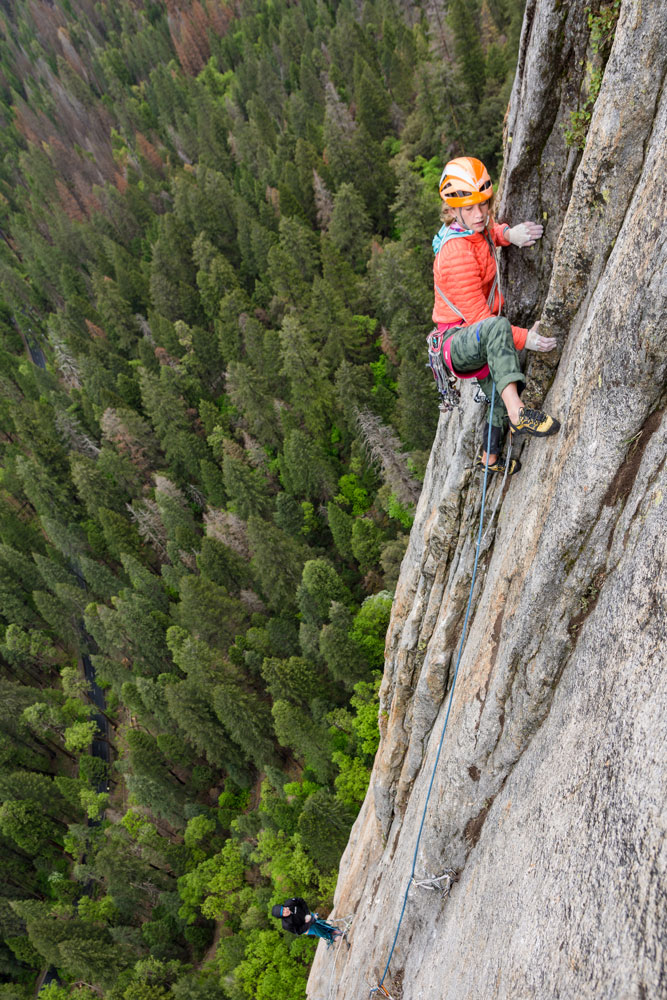 The first complete ascent of Central Pillar Direct combined the efforts of various teams
climbing on the route over the past 53 years. The history is something of a rambling saga, and runs like this:

The first route established on the Northeast Face of Middle Cathedral was the Chouinard/Pratt, bagged in 1964 by Yvon Chouinard and Chuck Pratt.
This line follows the prominent right-facing corner running 1,200 feet up the wall to the U-Shaped Bowl and the Powell-Reed ledges. The first 500 feet
ascends the right side of the Pillar of Frenzy. This section was first free climbed in 1978 by John Long and Pete Minks at 5.12. Five years prior,
in 1973, Jim Bridwell, Roger Breedlove, and Ed Barry climbed the first pitch of the Chouinard/Pratt (5.9+), then exited left onto splitter
cracks for four more pitches to a big ledge atop the Pillar of Frenzy, 600-feet up the wall. They carried on another pitch and a half and traversed
off left and into the Kor/Beck route, and finished up to the U-Shaped Bowl. Tobin Sorrensen and Gib Lewis returned in 1977 and pushed the
Central Pillar line directly up for another three pitches, using some aid. Bridwell returned with Long and Billy Westbay in 1978, and free
climbed the Sorrensen/Lewis Direct at 5.11. Later that year, Dale Bard and Kevin Worrall added a new first pitch, left of the Chouinard/Pratt,
directly up the face of the Central Pillar. That was the last piece of a composite route that was totally independent of the Chouinard/Pratt.
At 5.12d, Bard and Worral’s 60-meter lead off pitch was at the time one of the most difficult free pitches in the world.

Over the years, the first five pitches of the Central Pillar (minus the direct start) became one of the most well-traveled multi-pitch free climbs
on earth, with a conga line of teams swarming over it every single day from early May to the end of October. The direct finish and direct start were
rarely if ever done.

Throughout April and early May of 2017, the entire eight pitches of the Central Pillar, including the direct start and direct finish, were fully
restored: brushed and groomed, anchors rebolted, and some of the leads re-engineered into 50- and 60-meter monster leads, with each pitch individually
freed by Marcus Garcia, who headed up the restoration effort with Ryan Sheridan and his “Strawberita” crew. (Strawberita is a go-to intoxicant for
many valley locals, described as “24 ounces of sugar love, with three shots of bathtub rum and real artificial strawberry flavoring—all for two
dollah.”) 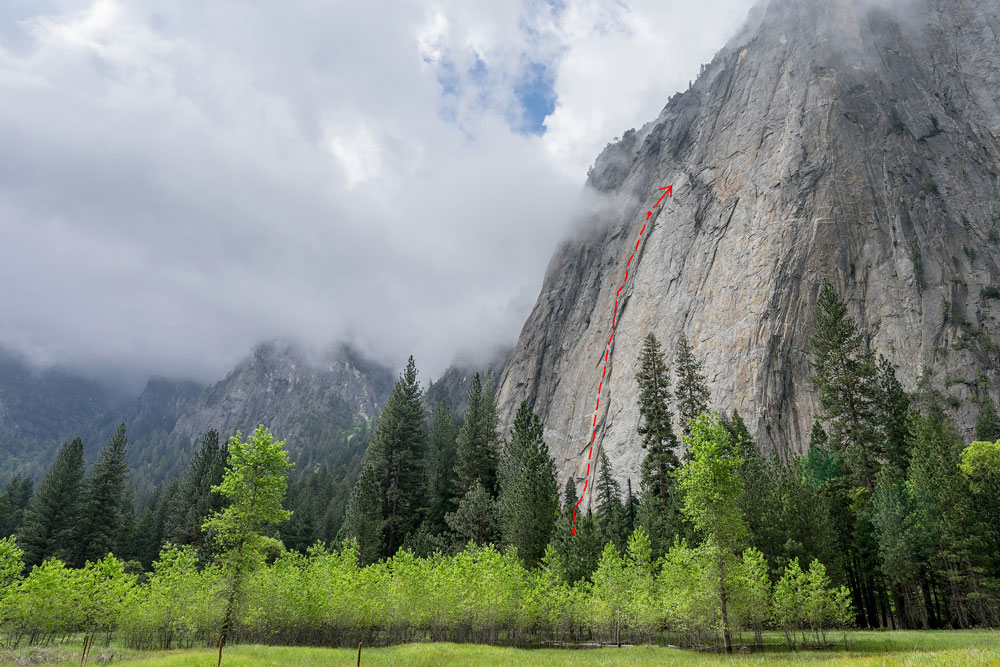 This month, Rude and Fundeburke
made the first continuous ascent of the entire Central Pillar Direct, with Rude leading the crux first pitch (5.12d), a superb 60-meter face
and thin-crack pitch (led on gear) that joins the standard Central Pillar route atop the second pitch.

Several weeks later, Garcia and Shin teamed up for the first ascent of Cosmic Girl, which links the first four pitches up the Chouinard/Pratt,
with the upper pitches of the Central Pillar Direct. The second pitch involves a 100-foot, 5.12 fingertip layback that rates among the best
free leads in the Valley. Garcia added a direct finish above the Fissure Largo, a “sting in the tail” of steep and runout 5.11 face, ending on a ledge
we named, Planet Garcia.

Garcia is a long-time Yosemite veteran who has climbed scores of walls and top drawer free routes and says that Cosmic Girl is the best free climb he’s ever done in the Valley,
featuring a full smorgasbord of Yosemite techniques, from thin to wide to open face. Remarkably, the entire route is protected on gear save for one
bolt on the 60-meter 5.11 pitch below the Fissure Largo. 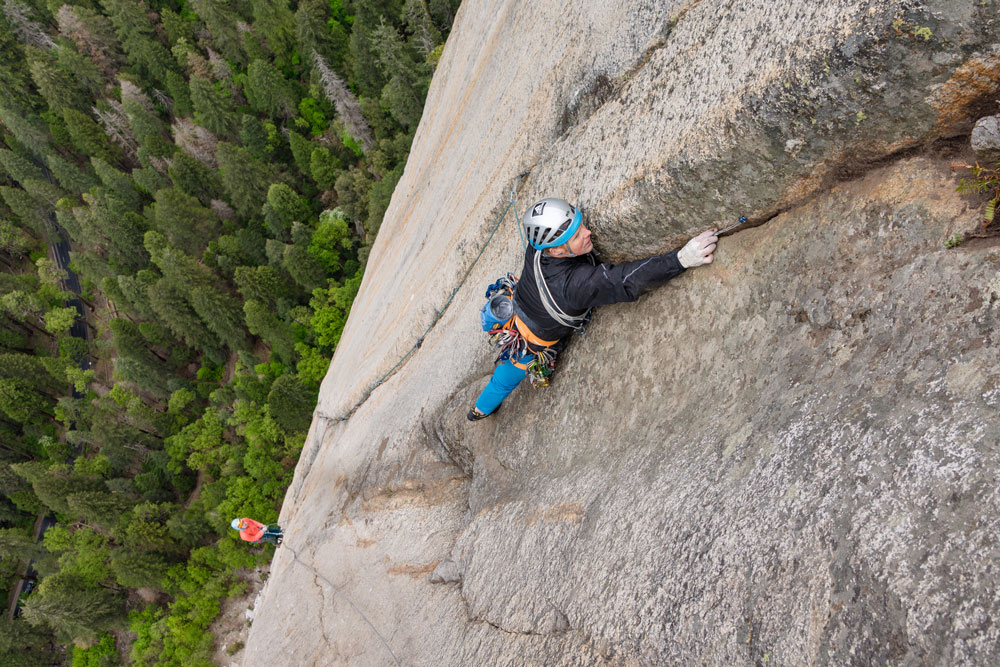 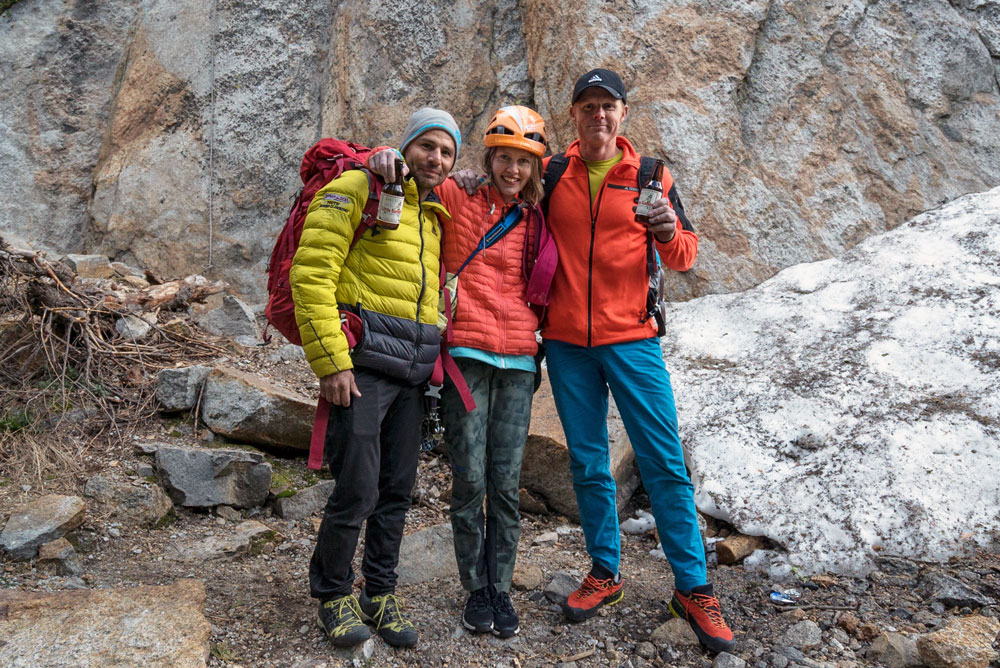 Check out Rock and Ice issue 238 for a feature profile on Marcus Garcia.