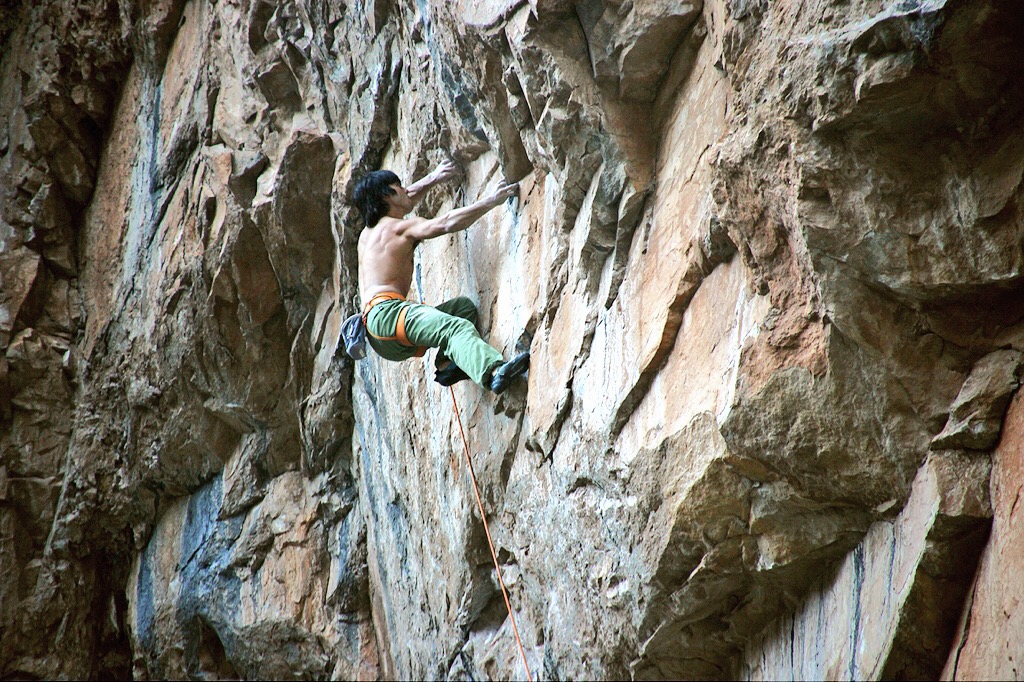 Jon Cardwell snagged the second ascent of Shadowboxing (9a/5.14d)—the hardest route in Rifle, Colorado—on Friday, July 31. On top of that, he also onsighted Roadside Prophet (5.14a) and “onsighted/flashed” (he says he watched Steve Hong climb the route a few years back) Uncertainty Principle (5.13d) over the week.

“One of my better weeks in Rifle yet,” Cardwell told Rock and Ice. He was in the canyon with Jimmy Redo and their youth climbing team from Movement in Boulder.

“We do an annual trip to Rifle with our team to show them the world of climbing outside, camping, and road tripping etc.” said Cardwell. “It’s always a great time with the kids and a huge plus that we’re able to get some climbing in ourselves.”

Four different days, Cardwell was able to get on the unrepeated Shadowboxing—a 45-meter test-piece bolted by Nicolas Favresse in the early 2000’s. After Favresse bolted the climb, it remained relatively dormant over the years, except for a few spurts of attempts by Tommy Caldwell and Dave Graham, among others.

In 2011, Jonathan Siegrist came away with the first ascent, proposing a 5.14d grade. He later found a mid-crux knee-bar and suggested that 5.14c was more accurate.

“Shadowboxing is something of an anomaly in Rifle,” Siegrist wrote in a blog post. “It’s difficult to compare with [the] more broken up, knee-bar laden, steep routes like The Crew (5.14c), Bad Girls Club (5.14c/d) and Girl Talk (5.14b) although I do feel that it is a step up from said climbs.”

Then a crux hold broke.

“It wasn’t until after the [hold broke] that I tried the line myself,” Cardwell said. “It seemed possible to me, and I spoke to [Siegrist] who also revisited the climb after the break and he told me ‘It goes!’

“He was psyched to see other people trying this climb. The line is just amazing.”

The route didn’t go down that year, but Cardwell was on it the next. One weekend in 2014, he and Matty Hong sussed out the moves, “but unfortunately the season ended and the climb was wet until this spring,” said Cardwell. “Fast forward a couple months and I was back underneath Shadow with my team.

“I was able to finish it off with everyone watching and one of my kids belaying. It couldn’t have been a cooler moment!

“In my opinion, this climb represents a good standard of 5.14d. Regardless of the grade, it is one of the coolest sport climbs I have been on in Colorado and a great test-piece.”

Jon Cardwell Sends Wheel of Chaos (V14) In A Day

V15s for Cardwell and Graham