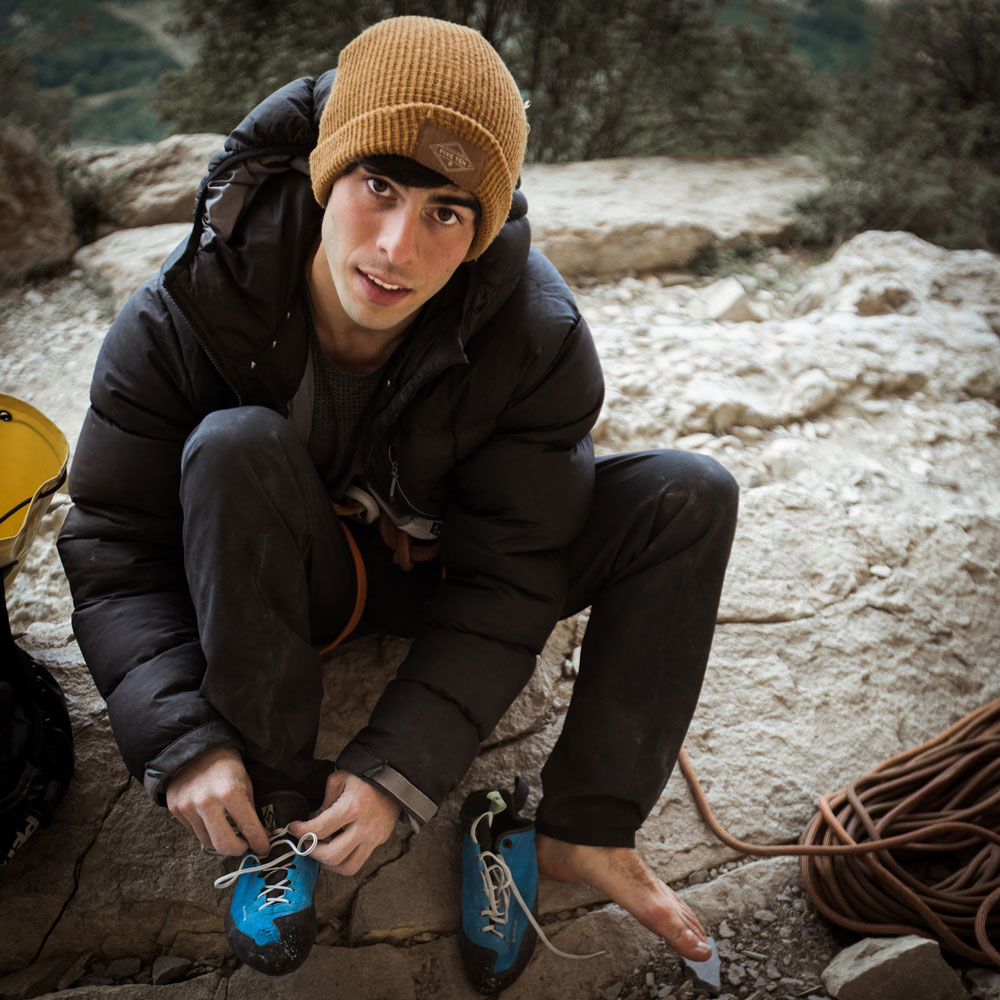 During his recent trip to France, Jon Cardwell not only sent Chris Sharma’s famous Biographie/Realization (9a+ 5.15a) in Céüse, he also onsighted his longest multipitch climb
and 5.13d single-pitch sport routes. We talked with Jon about his time on the 250-meter Kalistee (7c 5.12d A0), the new training plan he crafted
for Biographie, his Yosemite visions, and some advice he’d offer along the way to anyone’s project.

How are you feeling being home now after such a successful trip?

Well [it was] pretty cool that I was able to finish Biographie exactly in the middle of the trip—I wasn’t expecting that … I was able to climb other routes in Céüse, when on earlier trips I hadn’t had the time to. [I got to] climb at lesser known crags [like St. Léger], really highly concentrated with very cool, hard, steep climbs, similar to Rifle, and worked through a few projects.”

What inspired you to try out a “bigger wall?”

Since [Gorges Du Verdon] was so close and the trip was winding down and trying harder things felt even harder, I just wanted to try and see how [a multipitch would go], so we went.

Edwin Teran has a lot more experience than me, so it was his suggestion for us to do the wall. Kalistee was recommended to us a friend that lives in Céüse … and it ended up being a totally awesome route. I had never done a bigger multipitch before. I’d only done two to four [pitches] at a time, never more than ten. 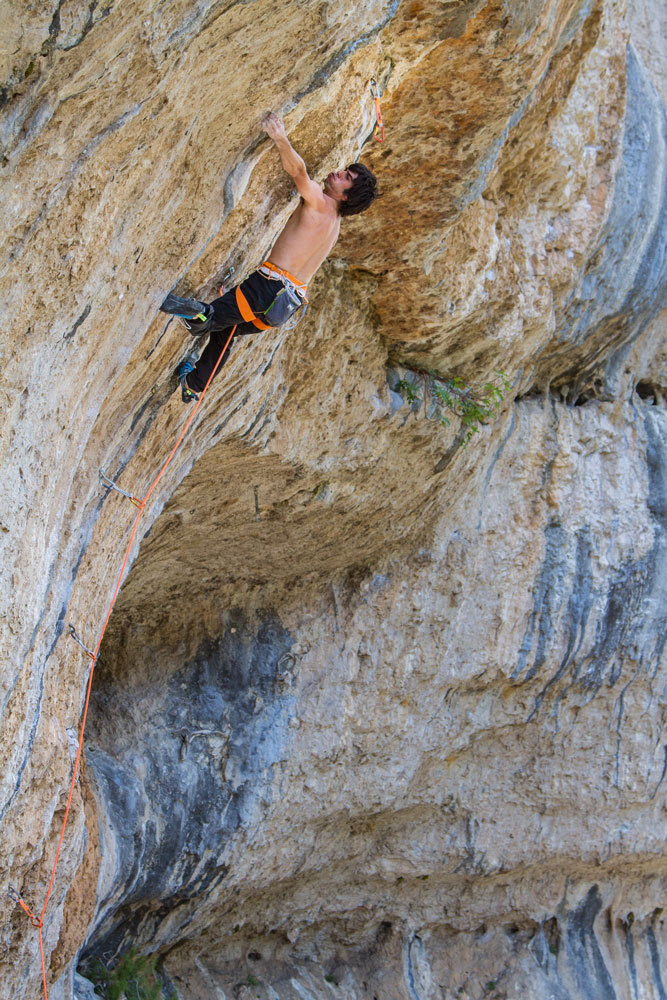 What was your training like for this trip? Did you change anything?

This year I did train a little more specifically for Biographie. I had trained a little [for past projects], but the training in the past was just general climbing. Leading up [to a project], I would just climb a lot and boulder, and do long routes to build endurance.

This time I did research into specific training, and starting way back in January we devised a plan based on articles and people we knew, and we built it for three months of training, split into three cycles. I’d train a lot during the week, and depending on weather, I would go outside without any plans, just to get outside.

Did you see a big difference?

The main difference this year wasn’t that I was so much stronger than when I’d tried it before … it was that because of the training I was at my strongest point on day one, whereas it took me a couple weeks to get [to that same point] last year. The training really expedited the process.

Yeah, I’d say so. Most climbers are people that fall into a routine: get psyched for a couple weeks and then it fades out. This time I never really stopped what I planned to do, and that was the biggest difference.

How does it feel to be one of only a couple Americans to climb such an impressive grade?

The grade lost meaning to me. After a while I just stopped thinking about it, and viewed [the climb] more as a challenge or an obstacle. I never thought about what it meant to climb 5.15, just wanted to see the project to a finish.

What was the biggest thing you learned during this trip?

The most important lesson was not that I can climb 5.15, but if I really put my mind toward something and work in a structured way towards it over time, it can be possible and only possible if you truly believe in it. It’s opened doors [for me] in that way, seeing things get done.

What’s next on your agenda?

For now, I’ve got lots of projects to climb on in Rifle and my most important project bolted up in the Fortress of Solitude. Right now the summer is too hot so we must wait until the fall. So I’m just staying in shape. Oh and I’m taking a trip to Yosemite for the first time in early fall.

Nice! Are you going to get on any big walls there? 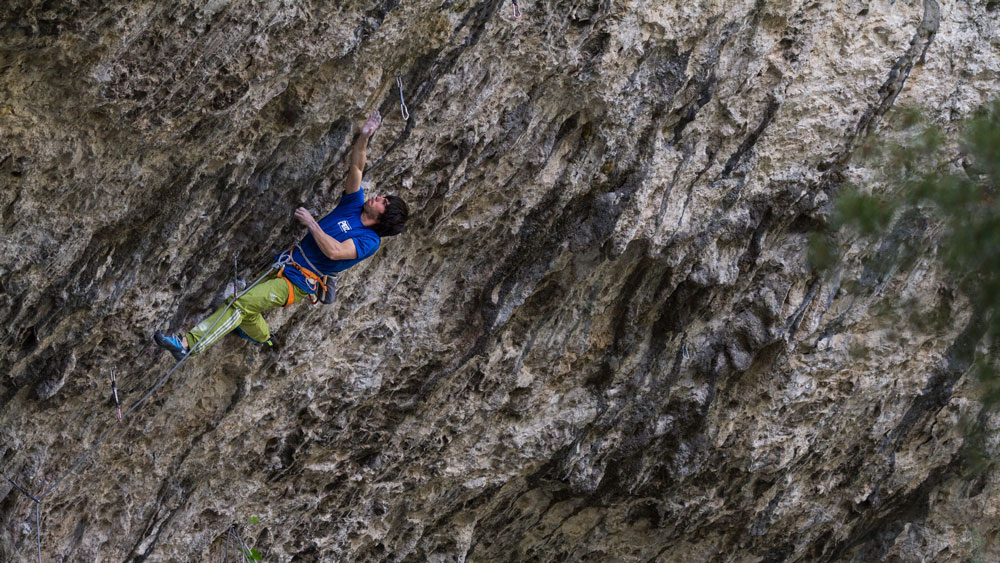 I’m definitely gonna get on some big walls, I’m not sure I’ll try to free a whole El Cap route or something. My experience is still limited on big walls and with trad, but I want to get my foot in the door and learn the process of climbing the walls and working away at the specific techniques in Yosemite.

Ever since I started climbing, [Yosemite has] been inspiring and now that I overcame one big project, I want to look towards something different and expand my abilities as a climber and that’s not really saying I’ll stop sport climb or climbing hard. I want to see what else is out there, and these walls are so inspiring.

If you could give some advice to other climbers, what would it be?

Most importantly, the message to people should be that even if they’re really psyched [on a project], it’s easy to get discouraged. They should reach out and stick with it, the projects are possible! Keep trying, keep going, and eventually it’ll pay off.

And then also, it’s cool to not always get stuck in one part of the sport. For years I’ve been stuck in bouldering and sport climbing. It’s a trend now: younger climbers are reaching out and trying new facets. It’s such a cool movement, and maybe not that new but I just started noticing it more recently.

[All climbing disciplines] compliment each other, if not physically, then in the sense of motivation. If you’re getting tired or burnt out with bouldering, then go sport climbing, and help rekindle your love for different things because then you’ll come back and maybe you’ll be more motivated, and that can make all the difference rather than getting strong.