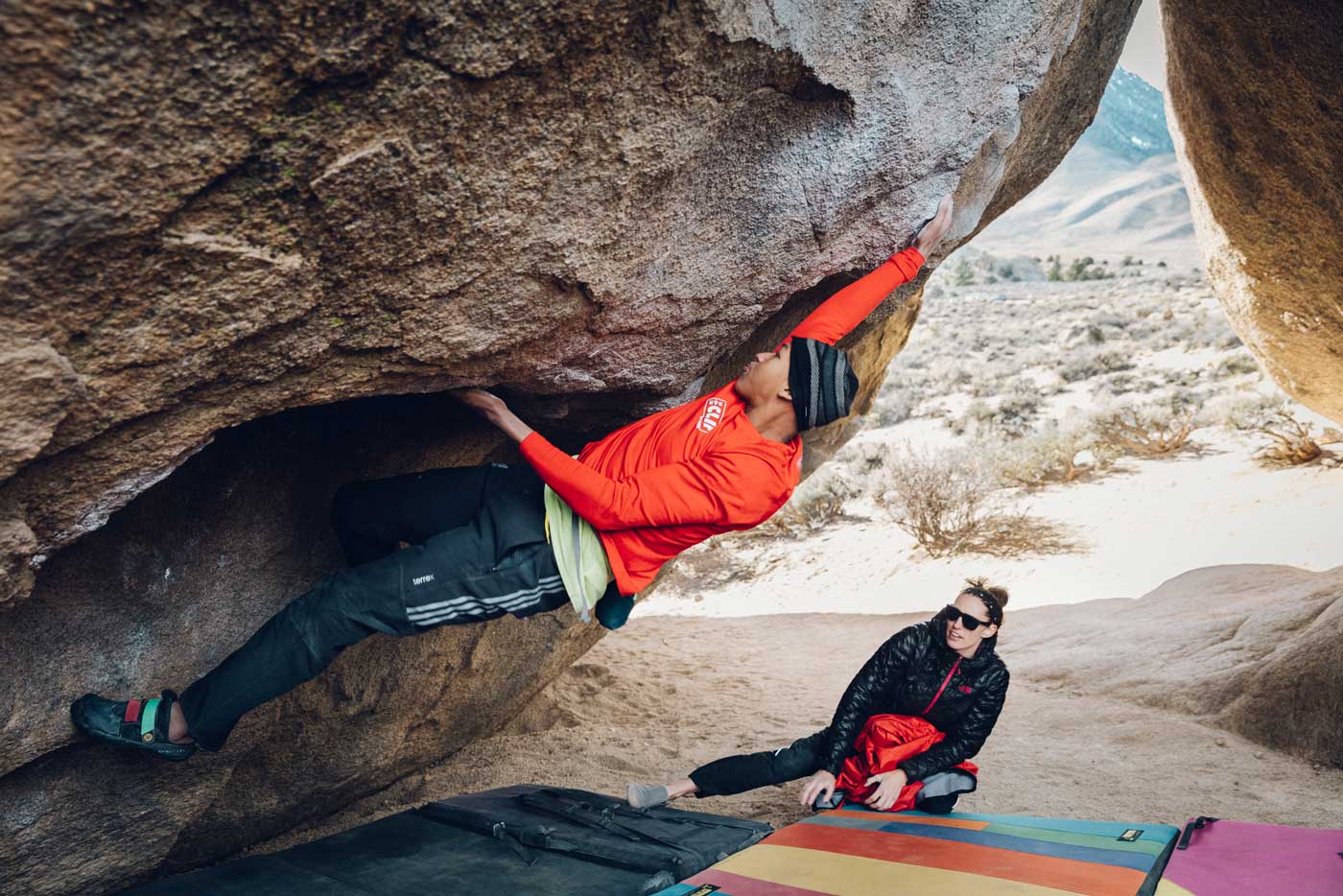 Michael Lim.” title=”Kai Lightner on The Buttermilker stand (V12), under the watchful eye of his “climbing mom” Alex Johnson in Bishop. Photo by Michael Lim.”>Kai Lightner, on his first “big” bouldering trip, took Bishop, California by storm. In only a week, Lightner, 16, made quick work of Bishop classics such as The Mandala (V12), The Buttermilker stand (V12), and Evilution to the Lip (V10)—second go.

What’s more impressive, Lightner is (or was) afraid of bouldering.

“Starting him off in Bishop might have been a cruel suggestion by me, haha,” says Alex Johnson, Lightner’s “climbing mom” and mentor. “Outdoor bouldering is such a different world for him.”

“When I was 12, I did the Triple Crown Bouldering Series.” Lightner tells Rock and Ice. “Outdoor bouldering scared my mom [Connie], so she wouldn’t let me go on another trip. That’s how I got hooked on sport climbing,”

Since then, Lightner says he’s been “out voted a few times” while training or sport climbing abroad, and ended up in the boulder fields. “However, I wasn’t psyched on it, because it was outside of my comfort zone.”

But a few months ago Lightner had a change of heart. “I started enjoying bouldering more,” he says, “and decided to take my first bouldering trip (since age 12) to Bishop over Thanksgiving break.”

When Lightner arrived in Bishop, across the country from home, he had a few hours before dark. In those few hours, Lightner sent Soul Slinger (V9), Little Forgotten (V10), and The Buttermilker stand (V12).

“I realized that although outdoor bouldering was new to me, I could handle it,” Lightner says. 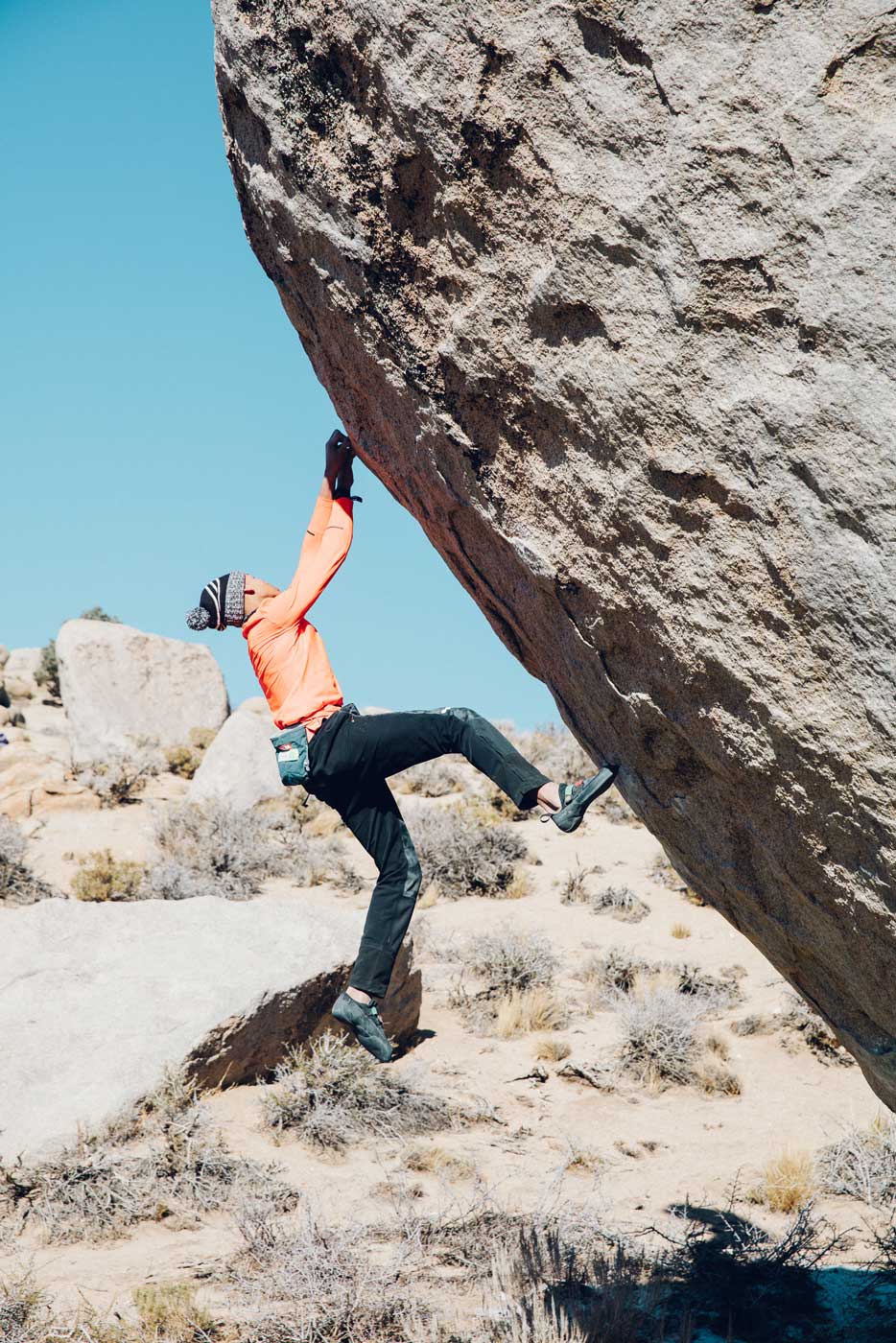 Michael Lim.” title=”Lightner on The Mandala (V12). “I am definitely psyched to boulder outside a little more in the future,” says Lightner. Photo by Michael Lim.”>“He did The Buttermilker in like five minutes,” Johnson says. “I thought, Okay, this is how this trip is going to go…The sky’s the limit!”

“Unfortunately, the next day the temperature dropped and a wind storm came through, which made it impossible to keep crash pads down to climb,” Lightner says. He resorted to the lie-down-and-hide-under-a-coat technique to keep the crash pads from going airborne.

Day three, the temperature plummeted to 30-degrees. “I know people call that send weather,” Lightner says, “but I had never climbed below 60-degrees before so it was a challenge for me.”

“It was hard to convince him that this is mostly how bouldering goes,” Johnson says. “You sit under something and fall off the same move over and over, freezing, because you need ‘send temps.’ I don’t know why anyone does it…”

With the good friction, both Lightner and Johnson made quick sends of One Mule Wonder (V10).

On Thanksgiving Day, the temperature crept to the upper 30s. “…Still freezing,” says Lightner. He nearly flashed Evilution to the lip (V10)—the beginning to the infamous 55-foot Jason Kehl highball Evilution (V12/13 R)—sending it his second go after slipping off the first move on his first try. “The highball top out wasn’t an option for me,” Lightner says. “The lip was already more than high enough. Maybe one day…”

“He wasn’t a huge fan of the heights…” Johnson comments. “But he has a good enough head on his shoulders to know when to back off.”

After walking Evilution to the lip, Lightner got to work on Chris Sharma’s Mandala (V12), but was deterred by the cold once again. 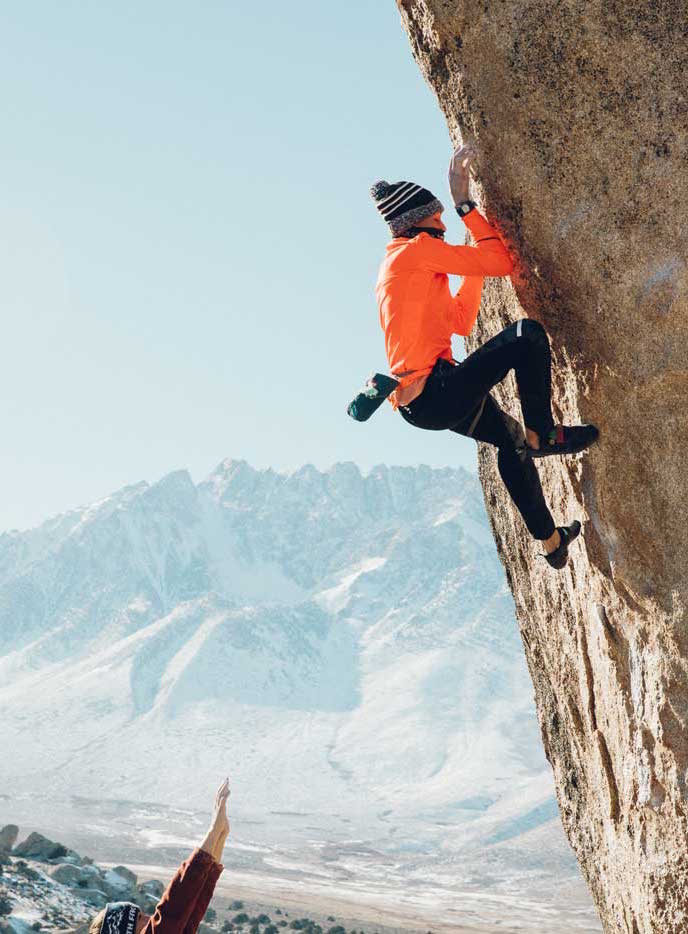 Michael Lim.” title=”“As the trip went on, Kai got more used to having rope-less air beneath him, ending his last day with a flash of Saigon Direct (V9) highball,” says Johnson. Photo by Michael Lim.”> On day five, Lightner “flashed a few classic V6s and V7s,” he says, including High Plains Drifter (V7). “I never thought I would try a highball problem,” Lightner says, “but the top-out looked easy so I went for it. It was scary being that high without a rope, but once I was up there it was too late to change my mind.

“It turned out well, but I don’t think I am going to go highball crazy any time soon!”

On Lightner’s last day in Bishop, the sun came out and it was up to a sweltering 40-degrees. Lightner flashed the highball classic Saigon Direct (V9) and sent Mandala (V12). “It was extra cool to have Ethan Pringle at the top of the problem cheering me on,” Lightner says, “and clearing the snow so I could top out.”

“He hiked The Mandala,” Johnson says, who has also climbed the problem. “It was an interesting process for me, because I kept offering beta and he kept doing different things. At one point I was like ‘WHY DO I BOTHER!!!!’ Hahaha.

“But he knows his style and what works for him. I think it takes maturity in one’s climbing to recognize when beta isn’t working, and to work out your own sequence and then go for it.

“Kai approaches everything like it’s the coolest climb ever, and if he can’t do something, he’ll move on to something else. He just wanted to have fun and climb cool problems, regardless of the difficulty. That was really refreshing.”

Kai Lightner Reflects on Competitions, Bouldering and the Future

Photography by Michael Lim. To view more of his work, visit his website: mlimphoto.com