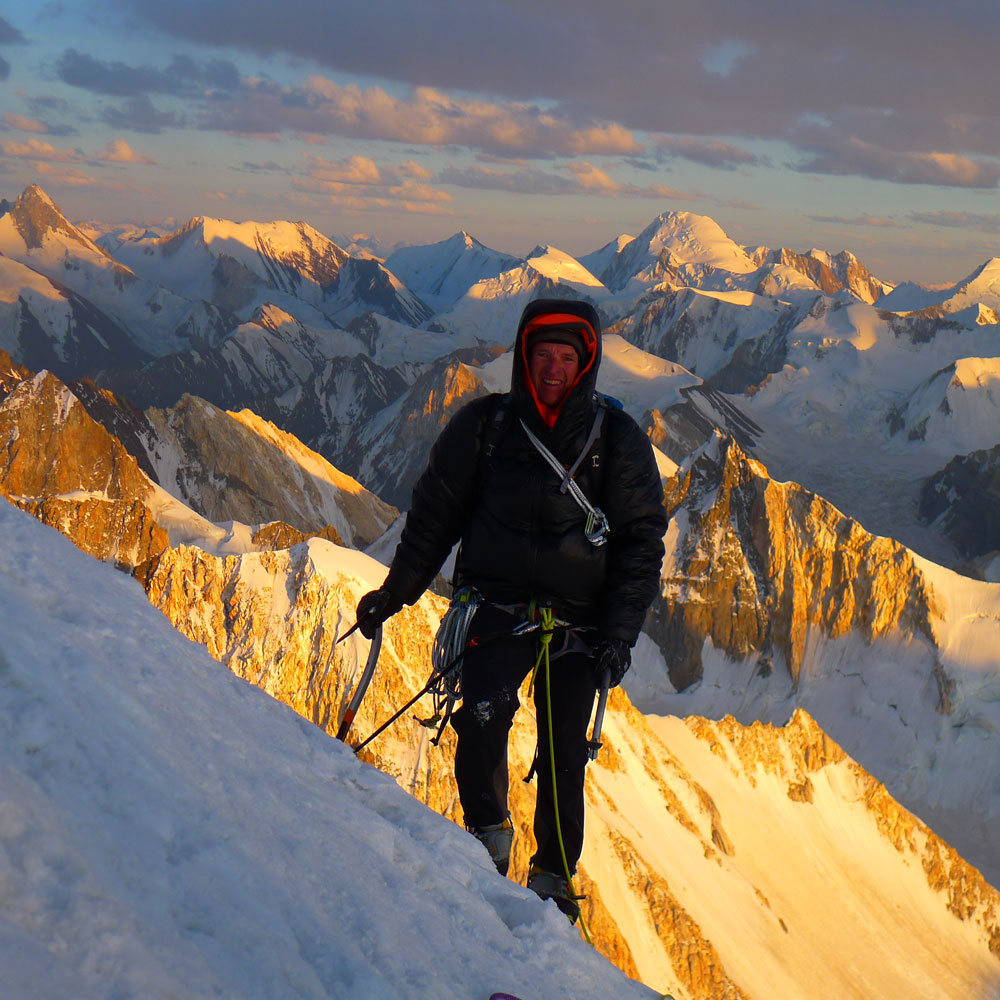 Steve Swenson has been climbing for nearly 50 years, with over 50
major expeditions and mountain ascents on three continents.

In 1990 he, Greg Child, Greg Mortimer and Phil Ershler as a small team launched a bid up the largely untraveled north side of K2, tackling the North Ridge.
Swenson had made four expeditions to Pakistan with no summit, yet gaining experience in learning what he calls the “long game” in logistics, approach
and strategy.

Following a strict turnaround time, he was the first of his team to reach the top of K2, and descended alone, to be followed on the summit by Child and
Mortimer. Ershler, feeling he was moving too slowly, made the difficult decision to turn around only 300 meters below the summit.

The team had climbed one of the hardest mountains in the world with a small team and by an unusual route. Swenson was only the 69th person and
the fifth American to climb the mountain. No Americans had ascended it since Lou Reichardt, John Roskelley, Jim Wickwire and Rick Ridgeway climbed
the Northeast Ridge in 1978. On the hike out, Swenson’s teammates played one of the best practical jokes on him in mountaineering history.

Swenson, a Piolet d’Or recipient and peer and climbing partner of such outstanding
alpinists as George Lowe, Alex Lowe, Doug Chabot, Greg Child, Mark Richey, and Steve House has recently written his memoir, Karakoram: Climbing Through the Kashmir Conflict.
Published in April by Mountaineers Books, the book is available on mountaineersbooks.org for $26.95. Swenson is donating all royalties to the nonprofit group The Mountaineers, which includes Mountaineers Books, for their education efforts.

Excerpted from the book, Swenson’s account of the climb and experience is below.

Karakoram: Climbing Through the Kashmir Conflict, by Steve Swenson

The two Gregs and I regrouped at the top of the north face, disappointed to find another snow slope between us and the
summit. From our vantage point a thickening cloud layer stretched as far south into Pakistan as I could see. With only two or three hours of daylight
left, we drifted apart on the final slopes, each with our own idea about a turnaround time. Not far ahead of the others, I walked alone to where there
was no higher ground.

Standing on the summit of K2 was not the euphoric experience I had dreamed it would be. A dull feeling
of accomplishment was mostly overshadowed by the relief of not having to go any farther. Hypoxia took the edge off everything, as if a translucent
screen had been pulled over my senses. A storm was brewing; dark clouds from the southwest obscured the summits of all Pakistan’s big mountains. I
rummaged through my pockets and grabbed the two palm remembrance crosses that Lance Owens had given me for Dave Cheesmond and Catherine Freer. Reaching
out, I opened my fist, and the wind ripped them from my hand. After four minutes at the top, I started down.

Shortly after leaving the summit, I passed Greg and Mortimer on their way up. We had a brief discussion about the lateness of the day and the approaching
storm. Greg mentioned that they might have to bivouac if it got dark—a dangerous proposition at this altitude in good weather. With a storm about
to break, I urged him to make it back to camp. Where the gently angled summit ridge spilled over onto the much steeper north face, I had to turn around
to face the slope to make my way down. A stumble was unthinkable: it would result in a 12,000-foot plunge to the glacier.

As the light faded, my oxygen-starved brain struggled to maintain my balance as I alternated plunging the toe of each boot into the steep slope below me.
I was desperate to stay focused. Here in the Death Zone, the key for me was to connect with the living. I dedicated each step to family and friends
I loved—starting with Ann, who was six months pregnant with our child; followed by my son, Lars; my parents; each of my brothers and sisters;
and many wonderful friends. After cycling through my list of names several times, the beam of my headlamp illuminated our small tent perched on the
slope below.

I was disappointed not to share the summit with Phil but happy to have someone there. He gave me a boiling cup of tea that I gulped down (it was only lukewarm
at this altitude). That started such a violent coughing spell I couldn’t catch my breath, and I started retching. Phil helped me through it by pressing
a bowl under my chin. “Don’t you dare barf all over the tent,” he said firmly.

It started snowing lightly, and we were relieved to see our two teammates arrive about an hour later. Greg and Mortimer had summited shortly after I had,
although Greg’s hands had turned numb on the descent. Mortimer had helped him the last hundred feet to our camp. Inside the tent, Greg plunged his
fingers into the warm water in the cooking pot and then into his down suit, screaming in pain as his hands thawed. Fortunately he had no frostbite
damage. We rested a bit, then Phil woke everyone at daylight to announce we needed some water. He brewed up, and we partook before sleeping for a couple
of hours. 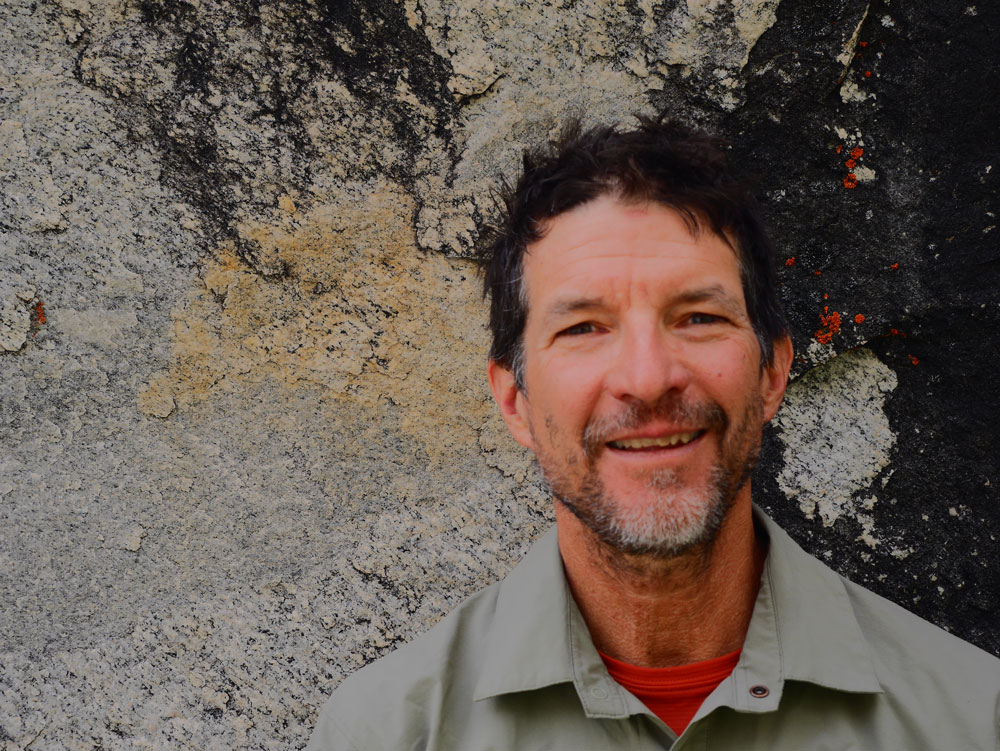 We
woke again to the full fury of the storm. It hit us with wind, heavy snowfall, and limited visibility. The stove sputtered out as we burned the last
of our fuel, so we shared the water left in the pot and packed up to leave. Mortimer led the way down through the blizzard in deep snow to the Eagle’s
Nest, and I went first down to Camp III. The others stopped to brew up and have a drink. But I was impatient to get down and headed straight for Camp
II. I was dangerously dehydrated by the time I arrived there. I dug out the tents and started the stove. With plenty of fuel, I melted a lot of water.
The lower altitude, warmer temperatures, and food brought me back from the brink. Greg, Mortimer, and Phil joined me at Camp II a couple of hours later.

It continued snowing all night, and in the morning we started down into such thick clouds that I couldn’t tell which way was up. I pulled the ropes out
from under the new snow down to Camp I, where we rested and Mortimer took over from there. We spaced ourselves apart when descending the fixed lines
and finally dropped below the whiteout. For the first time since leaving the top, I could see all the way down to the glacier at the bottom of the
mountain. Over the past several days, completely preoccupied with our ascent and safe descent, we’d been cut off from everyone else, but now I saw
a line of tiny figures far below advancing toward the bottom of the mountain. Rasool, Fida, Anwar, Sarwar, Peter, Lyle, Margaret, and our LO, Mr. Zhou,
advanced to meet us. As the stress of the previous days dissipated, I started to appreciate the pure joy of completing this climb. An overwhelming
surge of emotion spread through me after so many years of effort. I stood there alone, holding onto the rope, sobbing, while a slow quiver shook my
whole body.

During the walk out, I couldn’t help but wonder: Was it all a dream? Had I missed some slightly higher point farther along the ridge? Knowing
I had been there alone, Greg and Mortimer decided to play a joke on me by describing the summit area as slightly beyond and above my tracks they had
found in the snow. I knew they were kidding, but as we trekked back over the Aghil Pass, I needed a final glimpse to dispel my doubts, so I climbed
the slope east of the pass. Initially the intervening ridges blocked K2 from view, and as I moved higher the north sides of the Gasherbrum group appeared
first. Gradually the same pyramid that once moved Shipton to awe came into view. Through my telephoto lens, I could clearly see where I had reached
the top of the north face as it folded back into the summit ridge with its several false summits—and beyond those points, to where I’d walked
to the highest one. From a distance I could confirm that I had climbed K2.