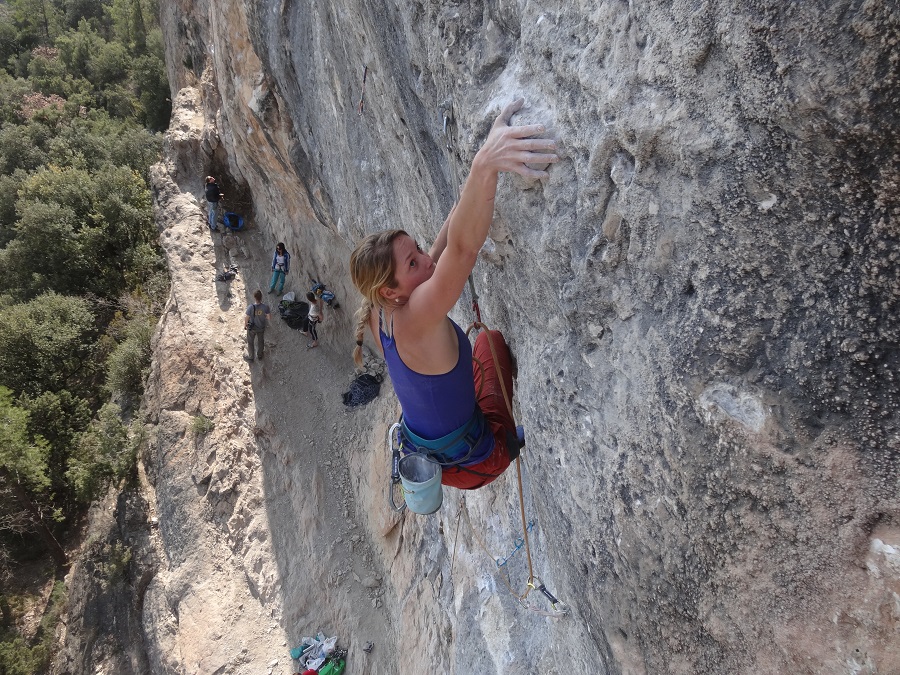 “I am very proud to have climbed China Crisis,” Whittaker told Rock and Ice. “[I]t was a big personal goal for me.”

Whittaker was introduced to the climb by friend and fellow accomplished British climber, Neil Mawson, a few years ago. At the time, she says, it was beyond her ability. But last November, she traveled to Spain to check it out.

“I thought it was an absolutely brilliant line up the center of a gray streak on little crimps, pockets and slopers.” Whittaker said. “I found it really hard just climbing from bolt to bolt but enjoyed it so much I booked a three week holiday off work as soon as I returned [home] then began training for it throughout the winter.”

On March 10, after four days of effort, Whittaker was able to connect the dots and send the climb.

“The hardest moves on the climb are right at the start, as you have to do quite a tricky boulder problem,” she said. “Once I had the beta on this I never actually fell off it on redpoint. I don’t think there was a specific crux for me as I fell off in a lot of different places, it just became a test of endurance.”

Whittaker has been climbing for most of her life; competing in indoor comps as a kid and transitioning to more adventurous outdoor technical gritstone and sport routes. Some of her impressive accomplishments include climbing Knocking on Heaven’s Door (5.12d) at Curbar, England, doing the first female ascent of Love Amongst the Butterflies (5.13d) at Cheedale Cornice, England and sending Gaia (5.12d r/x) at Black Rocks, England.

Feeling extremely motivated after achieving her two main goals (one being China Crisis the other Gaia) within the last six months, Whittaker is focused on her sport climbing for the time being.

“I will try and do as much [sport climbing] as I can over in the UK. I also have a trip to Pabbay booked in May, an uninhabited island off the coast of Scotland, to go trad climbing, that should be pretty interesting!”